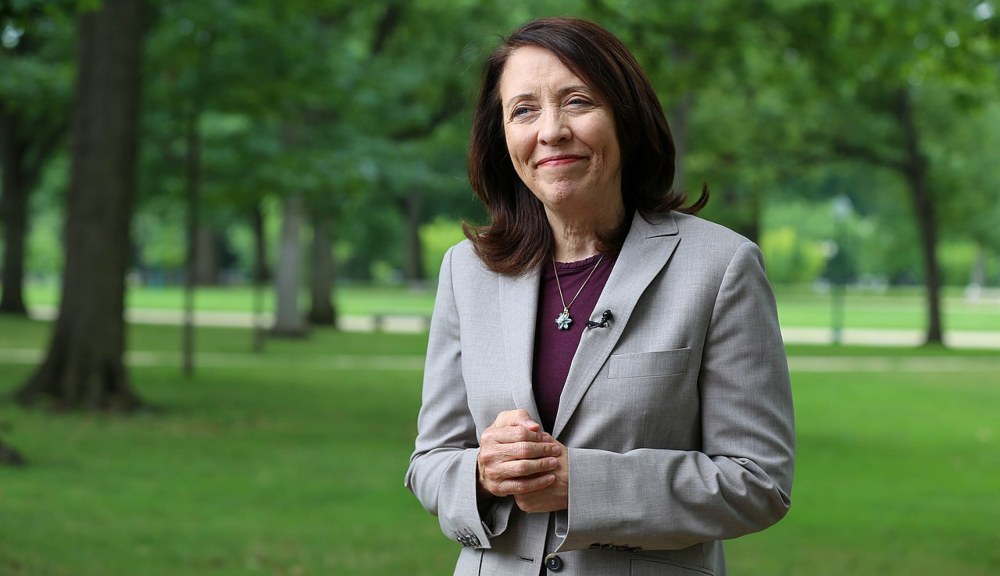 First term U.S. Rep. Marie Gluesenkamp-Perez, D-Wash., is getting an abnormal amount of attention in the “other” Washington, where she is carrying a message that Congress needs “more and more normal people” and talks of how the Portland auto repair shop she runs with her husband had its windows broken four times last year.

She has been profiled by CNN, and sat for long interview with Politico, delivering a salty reaction to the break-ins at her business: “So, yeah, I’m pissed off. I’m going to talk about it, you know.” The Congresswoman from Southwest Washington is becoming a model for blunt, down-to-earth talk Democrats need if they hope to win back blue collar and rural voters.

With her unexpected victory over MAGA Republican Joe Kent last November – in which she received no help from the Democratic Congressional Campaign Committee – MGP became the eighth woman serving in Washington’s 12-person congressional delegation.

She’ll be targeted by Republicans but won’t be starved for support next year. Rep. Suzan Delbene, D-Wash., has just been chosen to chair the money-dispensing Democratic Congressional Campaign Committee in the 2024 election. Delbene was one of the few House Democrats who helped Gluesenkamp-Perez.

The “Washington 8” are a diverse crew, often divided even on gender-related issues.  Sen. Patty Murray, D-Wash., was an original sponsor (with Joe Biden) of the 1994 Violence Against Women Act. She has spent three decades working to strengthen the watershed law and extend its protections to Native American Women.  Rep. Cathy McMorris Rodgers, R-Wash., has been the Republican leadership’s point person in seeking to push back on extensions of the VAWA.

Still, we’ve sent to Washington, D.C., a crew with distinctive personalities, different interests, and a staying power that is yielding political power.

Sen. Patty Murray is always deemed vulnerable by Republicans but was just handily reelected to a sixth term.  Murray is the state’s provider as chair of the money dispensing Senate Appropriations Committee and is president pro tempore of Congress’ upper chamber.  She was, in the last Congress, chair of the Senate Health, Education, Labor and Pensions (HELP) Committee.

Murray has worked certain issues, such as women’s health, from the day she was sworn in 30 years ago.  She was down-to-earth then as MGP is now, delivering her first Senate floor speech on ovarian cancer and friends who had died from it.  She is a public-education advocate, and came within a vote of blocking Senate confirmation of Trump’s far-right nominee for U.S. Education Secretary, Betsy DeVos.

The Appropriations chair is a post previously held by a trio of Northwesterners – Washington’s Warren Magnuson and two Republicans, Mark Hatfield of Oregon and Ted Stevens of Alaska.  Federal buildings, marine sciences centers, and international airports are named for these guys. Murray, a onetime preschool teacher from Shoreline, once headed a category labeled “no rocket scientist” in a Washingtonian magazine profile of Congress.  They flubbed it.

Murray has a knack for finding solutions, sort of like a mountain stream finding its way around obstacles.  As Senate Budget Committee chair, she found a path to preventing a government shutdown, working with GOP House Ways and Means Chair Paul Ryan. She found a vehicle to shake loose long-stalled legislation to create a Wild Sky Wilderness in eastern Snohomish County and expand the Alpine Lakes Wilderness in King County, recreation lands abutting major Puget Sound population centers.

Sen. Maria Cantwell, D-Wash., is a policy wonk and skilled legislator, a role once filled by the person whose seat she holds, the long-serving (1953-83) Sen. Henry Jackson.  She chairs the Senate Commerce, Science and Transportation Committee, where she authored and managed one of the Biden Administration’s major accomplishments, the bipartisan CHIPS and Science Act, designed to restore memory chip and semiconductor manufacturing in the United States.  The U.S. pioneered the technology, but now depends on a not-entirely-secure supply chain from Asia.

Cantwell has seats on the Senate Energy and Natural Resources and Finance Committees, giving her a trio of “A” list assignments.  She has (with GOP Sen. Lisa Murkowsi of Alaska) successfully pushed for construction of new polar ice breakers, worked (against Sen. Murkowski) to protect the Arctic National Wildlife Refuge from oil drilling.  She is responsible for getting permanent authorization and funding for the federal Land and Water Conservation Fund, which purchases endangered wild places and recreation lands.

Cantwell is an exacting, competitive boss and who runs through staff rapidly.  But she’s had easy reelection campaigns, her greatest exertion coming in a climb of the 13,766-foot Grand Teton while on a fundraising trip to Jackson, Wyoming.  She has also summited Mts. Rainier and Kilimanjaro.

Rep. Suzan Delbene captured what was created to be a “swing” district in Northwest Washington. District 1 was made safer for Democrats and more urban in the latest redistricting.  The former Microsoft vice president has risen steadily in the House, taking on right-wing crazies (e.g. Rep. Jim Jordan) on the House Judiciary Committee, and winning elevation to the tax-writing House Ways & Means Committee.

She has also chaired the New Democrat Coalition, a collection of about 90 House members, a moderate-liberal faction of the House Democratic Caucus that includes most D’s from swing districts.  This term, she has charge of winning back a Democratic majority.  The D’s need just five seats.

Rep. Pramila Jayapal, D-Wash., heads the Congressional Progressive Caucus, including left activists of “the Squad.”  She is a beloved guest of Rachel Maddow and Joy Reid on MSNBC talk shows. With a Seattle-centric district that is safest in the country, she has become an advocate of such think-big causes as Medicare for All and extending the Child Tax Credit.

A longtime immigrants-rights advocate, Jayapal came to prominence with the “Hate-Free Zone” campaign in Seattle after 9/11.  She was faulted as a tactician in the last Congress when the Progressive Caucus pushed President Biden to propose sweeping reforms in the face of thin Democratic majorities in Congress. They overreached, and drove down Biden’s popularity ratings.

Rep. Cathy McMorris Rodgers, R-Wash. Beginning her 10th term, she will chair the influential House Energy and Commerce Committee.  The Republicans are pushing an energy agenda that includes more oil drilling and coal mining on public lands, construction of pipelines and refineries, and loosening of regulations.

McMorris Rodgers preaches comity while practicing hard-nosed conservative politics.  She held a leadership post as chair of the House Republican Conference, until it was taken by a hard-charging Liz Cheney in 2019.  McMorris Rodgers has come back even as Cheney was booted out of her leadership post and Congress due to her unyielding drive to remove ex-President Trump from American political life.

CMR has an edgy reputation with fellow members of the Washington delegation.  She guards her right flank in the GOP caucus.  Seeking to rescue authorization of the U.S. Export-Import Bank, held up by a reactionary Republican committee chairman from Texas, GOP Rep. Dave Reichert and Democratic Rep. Denny Heck circulated a Discharge Petition to force a House floor vote. A lot of Boeing aircraft sales depend on loans guaranteed by the Export-Import Bank, but McMorris Rodgers was the only Washington member not to sign the successful discharge petition, earning a firm talking-to from Cantwell at one D.C. gathering.  McMorris is a strong abortion opponent and was a regular at the annual March for Life in the nation’s capital.

A trio of Democrats – Reps. Marilyn Strickland, Kim Schrier and Gluesenkamp-Perez – have come to Congress in the last three election cycles.  A former Tacoma mayor, Strickland blew away a Jayapal-backed progressive challenger and became the first African American in the Washington delegation and the first Korean-American elected to Congress.  She sits on two committees, Armed Services and Transportation, with senior members from Washington state.

Schrier has, with three victories, secured an 8th district that elected Republicans to Congress for 36 years.  She has courted GOP-leaning Kittitas and Chelan Counties with numerous town meetings and by championing water enhancement in the Yakima Basin.  A diabetic, she fought for the limit to Insulin costs for seniors that was a key part of the Inflation Reduction Act.  President Biden used a spring stop off at Green River College to tout the cause of holding down drug prices.

Gluesenkamp-Perez has a needy district with hostile enclaves.  She spent Friday in Lewis County, which Kent carried by a 10,000-vote margin in November.  She is blunt, telling Politico: “Frankly, I think there’s a lot of lip service to wanting people in the trades, rural Democrats.  They say it because it sounds good, but I’m not sure that there is an actual commitment to it.”

She’s tackling the issue head on, talking about rebuilding the American workforce and retooling trade schools to turn out electricians, plumbers, and carpenters. “Those are the jobs that can’t get offshored: That’s the long-term economic health of our country.  So, support for career and technical education programs is key.”

If MGP gets reelected, and Democrats retake the House, Washington’s delegation will gain even more clout. Two of its male members, Adam Smith in Armed Services and Rick Larsen on Transportation, will chair powerful committees.  Delbene will be a king- (and queen-) maker. Jayapal will speak for a powerful faction of the caucus.

It’s looking up for MGP.  Conflict, chaos, and vengeance have so far prevailed in the Republicans’ narrow House majority. The GOP threatens to send the federal government into default by refusing to raise the national debt ceiling.

“I got into this race to stop a fascist,” says Gluesenkamp-Perez.  Well, guess what: Joe Kent is running again.