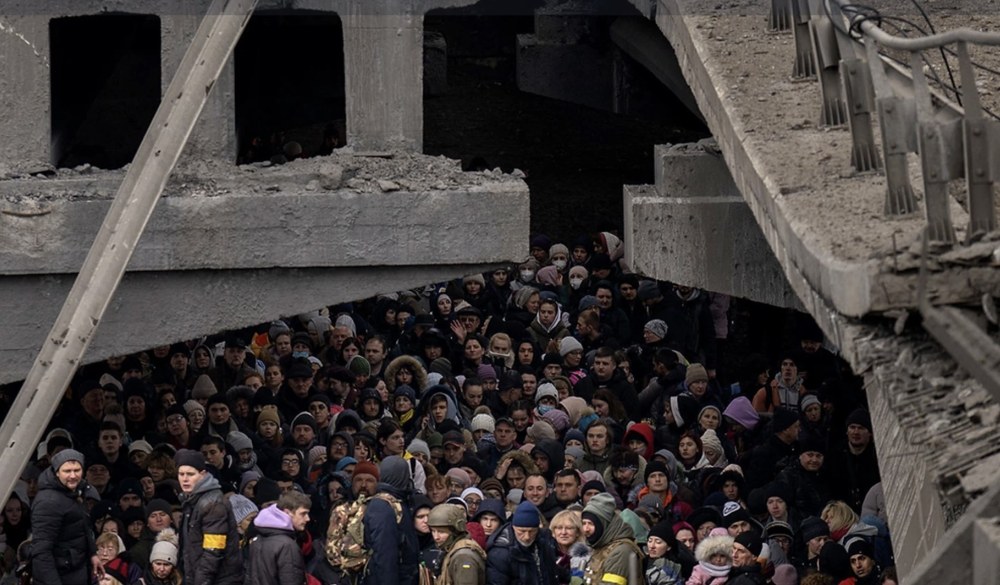 Emergency responders are accustomed to being rousted from slumber to dash off to far-flung disasters like the earthquakes of the last decade in Haiti and Nepal and the hurricane that devasted Puerto Rico. They rescue survivors buried under rubble, treat the injured, deliver food and water and set up shelter in the crucial first days of recovery. Then they head home with a sense of accomplishment and confidence that local authorities can take it from there.

That is not the current experience of Empact Northwest, a Seattle-area volunteer humanitarian relief organization working in Ukraine to help victims of Russia’s unprovoked war. They’ve been there for 10 months shuttling relief supplies to the embattled east and transporting refugees westward with no idea how much longer before they can say “Mission Accomplished.”

“What is so unusual about the Ukraine response is that there is no rescue involved,” said David Tagliani, a veteran search dog handler for the Federal Emergency Management Agency who now leads the Empact Northwest operation in Ukraine. Civilians fleeing the war’s indiscriminate bombardment don’t need to be dug out from rubble, they have flooded by the millions to Ukraine’s western border where foreign and domestic aid agencies help them find safe refuge abroad.

“It was a line two miles long and five people wide, all women and children, outside in 28 degrees,” Tagliani recalled in an interview while home in Poulsbo for the holidays.

“It was heartbreaking, seeing the separation of families at the border,” he said, noting that men between the ages of 18 and 60 are prohibited from leaving the country. The border guards had to keep the miles-long line of vehicles moving after drivers dropped off the would-be refugees, for security and to avoid blocking the escape route into Poland and beyond.

Five people in the queue died of hypothermia in the first days. Empact Northwest initially had only two vehicles to assist with transporting the refugees once across the border in Poland, a dispiriting process Tagliani said was like “scooping out the ocean with a teaspoon.”

In March his team paired with the Ukrainian nongovernmental organization Stay Safe that provides local manpower and security guidance for the operation. The joint aid venture has acquired a warehouse in Lviv, at the western border, and a small fleet of vans that load up with donated supplies and equipment for repairing damage to civilian infrastructure from Russia’s recent pivot to scatter-shot bombardment of electricity, gas and water distribution networks.

New challenges arose along with victorious spirits after the summer and fall Ukrainian counteroffensives liberated more than half of the territory seized by Russian forces in the early weeks of the war. Humanitarian aid workers have been able to reach civilian holdouts in the towns and cities where the Kremlin’s retreating forces laid waste to what they couldn’t hold. People with chronic conditions like diabetes or kidney disease who have gone months without vital medications can now be reached and provided with treatment.

Empact Northwest has launched a Seattle-area fundraiser to buy 10 communication and power supply “packs” to provide charging stations and connectivity in newly liberated Ukrainian territory. Five of those packs are to be installed at hospitals with the capacity to benefit from telemedicine solutions to the life-saving challenges of medical professionals operating near or behind front lines.

The fundraiser’s goal is set at a modest $125,000 for the power and communication project. It is scaled to “what we think the appetite will be” as donor and compassion fatigue typically set in during protracted emergencies, said Frank Schott, Ukraine partnership associate of Empact Northwest and former vice president of the NetHope consortium of 60 global nonprofits. The strategy of a small goal, Schott said, is that it can be achieved and create momentum as donors see the impact of their contributions in a quickly achievable project.

“The great thing about technology is that it is agnostic.  If you can provide power you can recharge phones. In the newly liberated areas they had phones but no way to power them,” Tagliani said, pointing to the uplifting effects of watching residents cut off from loved ones abroad connecting for the first time since the war began.

“To see the reaction of these people talking with grandma for the first time, letting them know they’re still alive. These are heartwarming moments. I can’t believe the difference they’re making,” Tagliani said of progress being made, both by defenders on the battlefields and civilians on the home front, that keeps him motivated to stay on a job with no completion date.

Empact Northwest is comprised of about 50 volunteers, mostly firefighters, EMTs, doctors and nurses. Tagliani is the only member still working full-time in Ukraine, with his search dog Libby finding new work in poring over rubble piles in recently liberated areas around the Black Sea port of Kherson.

What keeps him committed for the long haul, he said, is the determination Ukrainian fighters and civilians display in rising above the reality of their damaged homes, lost jobs, living hand to mouth in their home communities or abroad and suffering the greatest hardships of their lives separated from those they love.

“There is a long way to go and sacrifice is needed to get there. They keep going day after day. It’s really, really inspiring,” Tagliani said, crediting the heroic leadership of Ukrainian President Volodymyr Zelensky in galvanizing his citizens to turn the tide of war against the imperial ambitions of his counterpart in the Kremlin.

Tagliani says every Ukrainian he meets expresses effusive gratitude for the humanitarian and military aid from the United States and its NATO allies. Their biggest fear, though, is that Western support could weaken under a U.S. House of Representatives now controlled by a Republican majority whose new leader, Kevin McCarthy, has vowed “no more blank checks” for Ukraine.

More moderate and traditionally Russia-wary Republicans see talk of cutting support for Ukraine as campaign rhetoric, as it is widely supported by the American public. The party’s slim House majority could also restrain the far-right fringe from prevailing with their demands for cuts – at least for now when Ukraine most needs consistent support to press the march toward victory.

Carol J Williams
Carol J. Williams is a retired foreign correspondent with 30 years' reporting abroad for the Los Angeles Times and Associated Press. She has reported from more than 80 countries, with a focus on USSR/Russia and Eastern Europe.
Previous article
A Tribute to Dori Monson, Fearless Broadcast Journalist
Next article
Can the Seahawks Win this Week? (They already Did)

Masters of our Fate: Zelensky Takes Washington by Storm