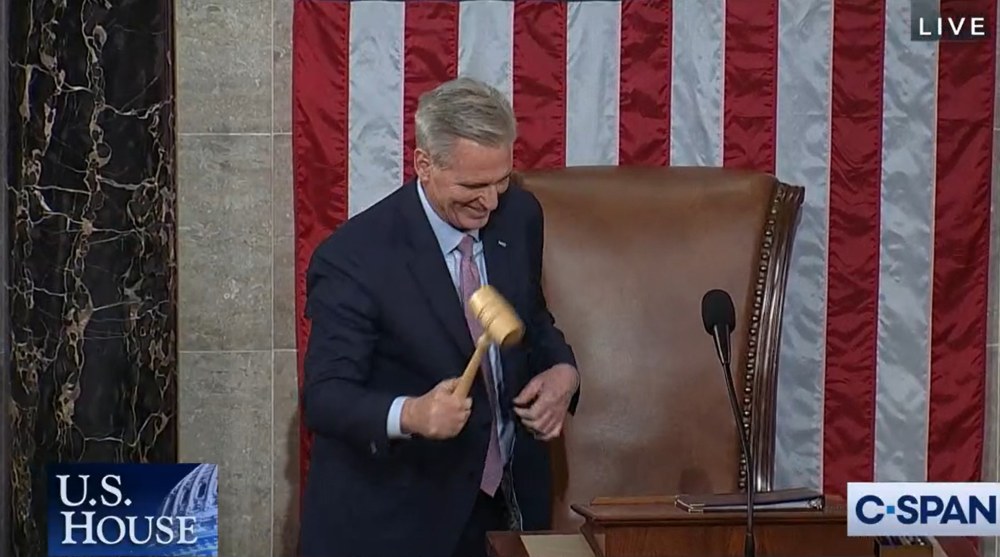 The notion that Democrats could do more than take popcorn-fueled victory laps while Kevin McCarthy twisted in the wind has been much-bruited over the past few days in place where such bruiting is concentrated: social media, comment streams by reporters, and the like.

The most common bruit argues that the Democrats should offer to give McCarthy enough votes to replace those withheld by rebels in his own party, in return for X, Y, and Z from McCarthy. A spineless McCarthy beholden to Matt Gaetz and Lauren Boebert would instead be a spineless McCarthy beholden to Hakeem Jeffries, a very superior turn of events. This could also be achieved by enough Democrats voting “Present.”

It is easy to understand why some such deal did not immediately spring to life: as long as Republicans thought it might be relatively easy to drag McCarthy across the finish line, they had little incentive to bargain. Even if Democrats wanted to do such a deal, they were better off waiting for Republican despair to increase.

Even though the twisting lasted until McCarthy squeaked into the speakership in Round 15, the Democrats chose not to throw McCarthy a lifeline, for several reasons. There’s the nakedly political calculation that letting McCarthy and his caucus of misfits screw up as thoroughly as possible for the next 22 months is the best way for Democrats to regain control of Congress and perhaps hold the Senate and White House.

There’s also the fact that Democrats loathe McCarthy and don’t trust him. He’s been sucking up to his crazies by threatening Democrats, even suggesting that he would use the Speaker’s gavel to club Nancy Pelosi. They could help him become speaker, and then get double-crossed, earning the fury of their own Democratic voters. It’s also likely that McCarthy would lose Republican votes if Democrats supported him, requiring a very large infusion of Democratic votes. This would leave the Democrats on the hook for the misdeeds of the Republican House of Representatives leading into the next election.

There was another option which was mentioned in the 15th-round nominating speech for Hakeem Jeffries. Instead of bailing out McCarthy, Democrats could recruit a half-dozen Republicans to vote for Jeffries. They could offer quite a bit to woo them: prominent committee seats or even chairs, plums for their districts, even free passes in the next general election. I don’t know if the Democrats tried this, but if so, it came to naught.

The Republicans most likely to respond would be the most centrist, and those are the ones, mostly, who won in Districts where the voters are roughly evenly divided between Republicans and Democrats. If you’re a Republican in a District that just gave nearly as many votes to your Democratic opponent as it gave to you, you might get some credit for pragmatic bipartisanship, and you might be somewhat less susceptible to being successfully primaried in the next election.

In 2022, six Republicans won by less than 1% of votes cast, and three more won by less than 2%. You’d think that at least a few such narrowly-elected Republicans might jump at the chance to bring home some extra-succulent pork and look like they’re putting country above party, but this ignores a major political reality: Republicans who scored the narrowest victories are squarely centered in the cross-hairs of the Democrats in the next election, as holders of the most flippable seats. By voting to elect Jeffries they’d win the undying enmity of the Republican Party, yet the Democratic Party would still try to flip them out of office sooner or later, unless they switched parties, a move with a low success rate historically.

So despite widespread yearning for some sort of clever move by the Dems to freeze the Republican rebels out of power, no such moves were made. The safer choice was to follow Napoleon’s dictum about not interrupting your opponents while they are screwing up, and that’s what they did.

Tom Corddry
Tom is a writer and aspiring flâneur who today provides creative services to mostly technology-centered clients. He led the Encarta team at Microsoft and, long ago, put KZAM radio on the air.
Previous article
How the Mosquito Fleet Defined Lake Washington
Next article
Best of the West: 2022 Wines You Can Still Buy