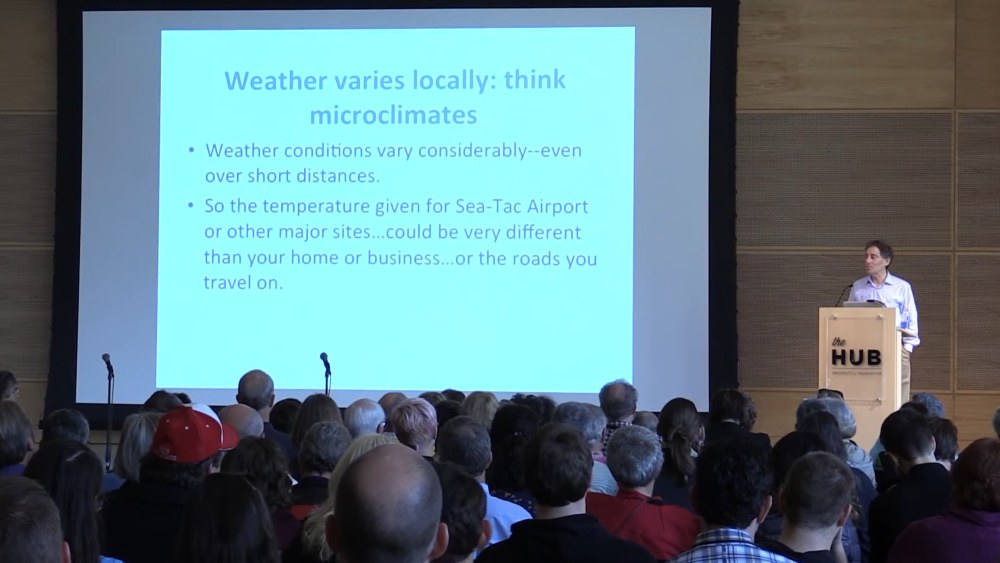 Two weeks ago, I posted a piece here anticipating king tides over the holidays, suggesting they might offer a glimpse at the future of climate change and rising sea levels.

I heard back – not in the online comments, but in calls and emails from friends and scientists and even my grandson, an oceanography student who tactfully confided that he disagreed with the premise.

The problem, I learned, was suggesting that the Pacific Northwest coast might be less susceptible to rising sea levels than other regions. This, I was told, may be somewhat true of the outer coast, but not so in Puget Sound.

My critics wagged their fingers specifically at my primary source – University of Washington meteorologist Cliff Mass, whom they described as a “climate change denier” and “outlier.”

While I’ve never met Mass, I do call him occasionally because (a.) he is a very smart meteorologist who literally wrote the book on Pacific Northwest weather, and (b) he returns my phone calls.  For a journalist, that’s a powerful combination.

He does not deny climate change, but he is most certainly an outlier, which I suppose is one of the reasons I called him.

All this left me rethinking a chronic professional dilemma – the tenuous and sometimes rocky relationship between science and journalism. It’s a problem that crops up when journalists like me (a C in college biology) wade into complex scientific questions. Or when scientists like Mass wade into journalism. Either adventure can turn into a minefield.

Most scientists are deeply suspicious of reporters. They believe we misunderstand their work and tend to fracture it in the reporting.  Reporters are equally wary of scientists, whom we suspect go to graduate school to learn how to torture the English language.

At a fundamental level, serious journalists and scientists have the same basic objective: We both seek Truth, to increase our collective understanding of the world. But we begin with different questions. Scientists ask: “What is this and how does it work?” Journalists ask: “So what? Why does this matter?”

To scientists, truth derives from repeated experiments. Their bible is the scientific method, an orderly process that requires precision and caution. Their findings are tentative and qualified; there is no last word on anything, presumedly including climate change.

The journalist’s scripture is the First Amendment. We value a free-for-all exchange of ideas that has little to do with precision. Truth will emerge from conflict — a concept that baffles most scientists.

Most important, journalists are communicators. We believe knowledge and ideas are valuable only to the extent they are communicated. To do that, we resort to unscientific storytelling and anecdotal evidence. The science can get lost in the retelling.

Most scientists work alone or in small groups, conduct their experiments, and eventually submit their findings to other scientists for review – usually in terms unintelligible to the rest of us.

Which takes me back to Cliff Mass, the outlier who has never been accused of being shy about communication.  His 2008 book, Weather of the Pacific Northwest, is a best-seller at the UW Press, and thousands of readers follow his blog.  For years, his deep, resonant voice drew more thousands to his weekly public radio weather commentaries – until he was dropped precipitously a few years ago.

Mass attributes his unorthodox style in part to his college mentor, the astronomer Carl Sagan made famous by his “billions-of-stars” TV documentaries.  “I remember Sagan telling me: If you want to communicate effectively, you have to go direct, do it yourself,” Mass recalls.

So he did.  He has been blogging since 2008. His weather observations are widely followed and respected.

But he occasionally ruffles feathers when he wanders afield from meteorology. Public radio dropped him in part because he took issue with new approaches to teaching math.  Early in the pandemic, he opined that Covid “is far less apocalyptic than some suggest.”  Others took issue when he questioned the findings of a study on mountain snowpacks.

These days, the issue is usually his approach to climate change, which Mass insists is a “terrible” term.  “Global warming is better, because it allows for the debate over how much warming is natural and how much is human-caused.”

Among scientists and reporters alike, Mass remains an iconoclast and contrarian, inclined to use his megaphone to challenge conventional wisdoms and tilt the occasional windmill.

Then again, so were Galileo, Darwin and Einstein. Even, in a stylistic sense, Carl Sagan.

“The debate is influenced by jealousies and ill will,” Mass says. “Carl Sagan was hugely successful, but he was denied honors he should have had.  Scientists are human beings, prone to human failings, the desire for celebrity and notoriety.”

It was Sagan’s celebrity, not his ideas, that rankled his peers. But there lies another common denominator between scientists and journalists: We are complicated creatures prone to bias and idiosyncrasy.  But neither discipline can afford to impose intellectual orthodoxy on its practitioners.

So I will continue to follow the Cliff Mass blog.  I want to reread his book.  If he strays into math education or epidemiology, so be it. But he remains my go-to source for Pacific Northwest weather.

As for sea level rise? I’m not a scientist, but it only makes sense to err on the conservative side.  Try to limit my CO2 production and support leaders who feel the same, while keeping my aging mind, eyes and ears open to people who see different truths.

Ross Andersonhttps://rainshadownorthwest.com/
Ross Anderson is a founding member of the Rainshadow Journal collective. He retired to Port Townsend after 30 years of journalism at the Seattle Times.
Previous article
2023: Dawning of The Age of Seattle Austerity
Next article
Why We Are Angry: The Dangers of Relentless Happy-Talk