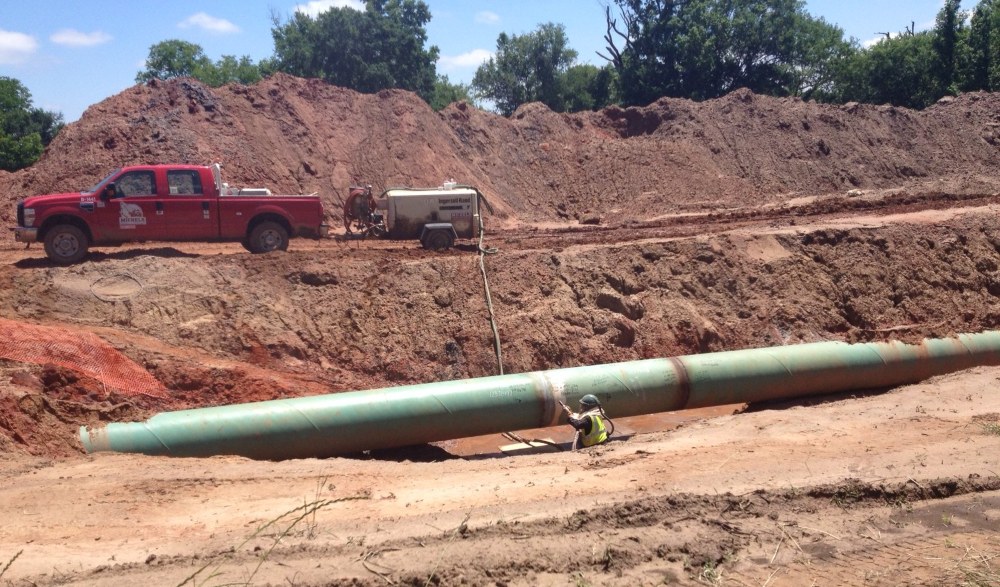 Nearly 600,000 gallons of oil, equal to 14,000 barrels, spilled from the Keystone Pipeline into a rural Kansas creek last week, which was the country’s largest pipeline spill in 12 years and the 23rd spill since the pipeline became operational early in the past decade.

The pipeline, owned by TC Energy, carries up to 600,000 barrels a day of heavy oil from the tar stands of northern Alberta to Cumberland, Oklahoma.  One of America’s major environmental controversies arose during the Obama Administration, causing the president to reject a planned extension to export terminals on the Gulf of Mexico.

“The discharge has been contained and no drinking water has been impacted,” the U.S. Environmental Protection Agency claimed in a statement.  The spill site is surrounded by pastureland. TC Energy said it had deployed 250 crews to the spill and installed booms and vacuum trucks to clean it up.

True impacts of a spill often are not immediately apparent.  For instance, a 2010 spill from the Enbridge Pipeline in Michigan dumped more than a million gallons of oil into the Kalamazoo River and ultimately cost $1.21 billion to clean up.

The spill is likely to grow a controversy that cannot – and should not – be contained.  Republicans are set to regain control of the U.S. House of Representatives, and push for an “Unleash American Energy” program that would restore and expand oil drilling in public lands and waters, mining of coal, as well as push for building more refineries and pipelines.

“We should never have shut down the Keystone Pipeline: That is what Joe Biden did on day one,” Rep. Cathy McMorris Rodgers, R-Wash., set to chair the powerful House Energy and Commerce Committee, told CNBC in a pre-election interview.

Controversy over Keystone XL, the proposed expansion, has taken attention from the already existing Keystone Pipeline, which supplies Midwest refineries. Many of its spills have been small, some not-so-small.  In 2017, 6,500 barrels spilled near Amherst, South Dakota, while two years later a 4,500 barrel rupture took place near Edinburg, North Dakota.

The Keystone XL expansion has been holy grail in Republicans’ energy advocacy over the last dozen years. It was also a project on which climate activists drew the line. Environmental protests, spawned by a new group called 350.org, brought demonstrators to the White House.  Actress Daryl Hannah and Robert F. Kennedy, Jr., were arrested in one protest.

Not so.  President Obama rejected Keystone XL.  As well, protests were directed at another pipeline in the Dakotas.  The Standing Rock Sioux tribe argued that the Dakota Access Pipeline would endanger their drinking and irrigation water.  Tribal members camped out on the pipeline route and were joined, at one point, by actress Jane Fonda. The deployment of police dogs did not enhance the image of the pipeline builder.

Donald Trump came into office, reversing Obama’s decision and giving a green light to Keystone XL. Trump ordered the Secretary of the Army to expedite permitting for Dakota Access.  But the path for Keystone XL was not clear.  Environmental concerns held up the project in the courts.  Candidate Joe Biden pledged in 2020 to block Keystone XL, and did upon assuming the presidency. TC Energy gave up on the project.

But not Cathy McMorris Rodgers, the Congresswoman from Spokane.  She wants the 1,200-mile project put back on the front burner.  CMR is to sound bites what Billy Graham was to the Bible.  Although Keystone XL would take years to complete – and the oil would be bound for export – McMorris Rodgers has continued to turn out lines like: “We need to flip the switch.”

A recipient of generous contributions from the Oil Patch, McMorris Rodgers has ventured down to Texas, warning of Russian oil production and decrying the Green New Deal, while delivering a new line: “I think we should put Midland over Moscow.”  She headed opposition to the environmentally green Inflation Reduction Act on the House floor.

Of course, the argument can be made – to which there is some truth – that pipelines are safer than oil trains in transporting crude. The Lac-Megantic oil train explosion of 2013 destroyed a small town in Quebec and killed 47 people.  Derailment of 14 cars on a Union Pacific oil train in the Columbia Gorge saw cars catch fire, but no oil went into the river.

But pipelines do go beneath major rivers and above the Ogallala Aquifer, vital to Midwest agriculture. A 2011 rupture of the Exxon Silvertip Pipeline discharged 64,000 gallons of Bakken crude into the Yellowstone River in Montana, creating a slick as far downstream as Williston, North Dakota.  A Bridger Co. pipeline dumped about 40,000 gallons into the Yellowstone in 2015, of which the cleanup was only able to capture 1,700 gallons.

The Alberta tar sands, pictured from the air, look like Mordor from Lord of the Rings.  Tar sands oil is tough to deal with when spilled since it is heavy and sinks to the bottom of any waterway in which it is spilled.

Canada is expanding the TransMountain Pipeline, from Alberta to Burnaby, B.C., to a capacity of 890,000 barrels a day.  The tar sands oil will be shipped out via the Strait of Juan de Fuca. The project will mean a sevenfold increase in tanker traffic through Haro Strait, the boundary between our San Juan Islands and the Gulf Islands of British Columbia.  Its path of waterways is flanked by national, provincial and state parks. The project has been opposed by Washington Gov. Jay Inslee and former B.C. Premier John Horgan and successor David Eby. It is, nonetheless, going ahead.

The Sierra Club delivered a salient reaction to the Keystone spill in Kansas: “There is no such thing as a safe tar sands pipeline and this is another disaster that continues to prove we must protect our climate and our communities first.”

(A version of this post first appeared in the Northwest Progressive Institute’s “Cascadia Advocate.”)