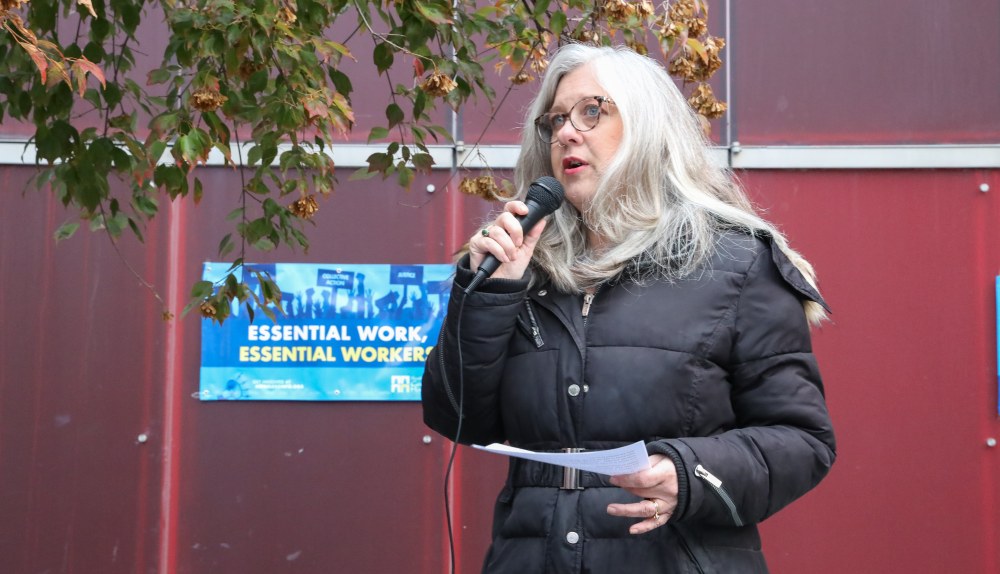 Lisa Herbold Stands Down, but the Battle to Control City Council Goes on

City Councilwoman Lisa Herbold, who has represented District 1 (West Seattle) since 2015, has announced she will not seek a new term in 2023, thus ending a 26-year stint at City Hall. (She helped elect Nick Licata in 1997 and then served as his powerful chief aide.)

Herbold is thus the most experienced member of the City Council. She has been a strong advocate for renters, for the homeless, and for social-justice causes. Like Licata, she has been a thorn in the side of business. This has put her at odds with the her largely moderate (and somewhat idiosyncratic) district, but she has always tended to district business diligently.

That said, she barely was elected (by 39 votes) over Shannon Braddock in 2015, and those who have seen recent polls report that Herbold (along with Kshama Sawant) has a wide negative margin with her district voters. Herbold’s favorable rating among district voters is reported to be under 30 percent in approval, always a very an ominous sign for an incumbent.

Herbold, a native of New York and a resident of Highland Park, is 57, and so is likely to remain active in Seattle politics. She has always done her homework on issues, as did Licata. Herbold is also something of a media darling, still living down the sobriquet of “Lisa Who Leaks,” after years of feeding the left media and skewering the business establishment.

Herbold’s departure, along with the just-announced 2023 retirement of Debora Juarez in District 5 (far north Seattle) will mean the city council will is assured of getting several new faces. All seven district seats are on the ballot next year, and there will surely be a donnybrook election for many of them. That will certainly include Herbold’s now open seat, with moderate candidates trying to replace the progressive activist voting record of Herbold, who had a largely adversarial relationship with the business community, and on the other side progressives fighting to replace Herbold with either a like-minded progressive warrior or someone even farther left.

In effect, the balance of power for the Council, now split between center-left (Nelson, Juarez, Pedersen), and true-left (Herbold, Sawant, Mosqueda, Morales) blocs – with Lewis and Strauss somewhere in between – will very much be on the ballot next year.

Another wild card is whether Sawant will seek or gain reelection in 2023. There are persistent rumors she’s not going to run, but the sourcing behind those is sketchy and efforts to reach Sawant or her office proved fruitless. Even if Sawant does run, like Herbold, polling shows Sawant is wounded politically, with well over half of her constituents viewing her unfavorably, so she is sure to have a fight on her hands.

That said, Sawant’s Capitol Hill/Central District renter-heavy district tilts strongly left, and it is pretty sure, even if Sawant is ejected, that her replacement would likely be to elect a strong progressive.

It’s possible that, after the dust settles after next year’s races, a more moderate Council will accelerate a strategic retreat that began with Sara Nelson’s victory last year over Nikkita Oliver for the at-large seat previous held by Lorena Gonzalez, the left’s defeated standard bearer in the mayoral race.

But that shift to the middle is far from a sure thing at this early point. West Seattle is something of a suburb to Seattle, formerly the domain of Boeing workers and still a land of bungalows. Such suburbs, also true in Juarez’s north-end district, are anxious about crime and homelessness in the central city, and still wary of urbanist density agendas, spreading apartments, and the call to eliminate single-family zoning. On the other hand, West Seattle has become a refuge for inner-city Seattleites seeking affordable housing. To some observers, the core of West Seattle is now “Capitol Hill West.”

Politically, Seattle is deeply divided these days, which makes nothing certain or easy to predict, except the prospect of further political warfare. As Herbold’s decision to stand down makes clear, that remains true for next year’s Council elections.

David Brewster
David Brewster, a founding member of Post Alley, has a long career in publishing, having founded Seattle Weekly, Sasquatch Books, and Crosscut.com. His civic ventures have been Town Hall Seattle and FolioSeattle.
Previous article
Washington on Top: My But We’re Productive!
Next article
Do As They Please? Moore V. Harper asks SCOTUS To Declare Who Has the Final Word