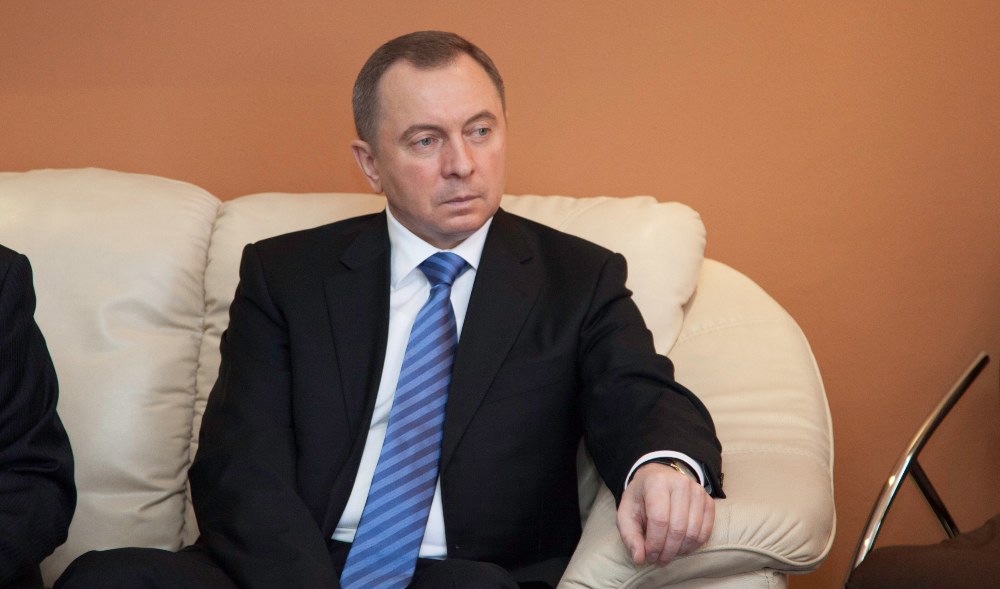 When the Belarus state news agency announced two weeks ago that a seemingly healthy and quasi-moderate Cabinet minister “suddenly” died, speculation naturally turned to Kremlin perfidy in the elimination of an official opposed to Belarus joining Russia’s war in Ukraine.

Late Foreign Minister Vladimir Makei was the most prominent advocate in Belarus’ thuggish autocracy for more independence from Moscow and better relations with the West.

Since 64-year-old Makei’s untimely and as yet unexplained death on Nov. 26, Putin has been ratcheting up pressure on Belarusian President Alexander Lukashenko to come to his rescue in the stalled quest for a new Russian Empire.

Hundreds, if not thousands, of disaffected young Belarusians are said to have gone to Ukraine to help their neighbors fend off Putin’s assault on Ukrainian freedom and independence. Those unconfirmed and anecdotal reports gained some credence last week when the Belarusian parliament drafted a measure to apply the death penalty for fighters in foreign conflicts convicted of high treason.

No successor to Makei has been named by the Lukashenko government, nor has any official report been issued on what killed the minister at his home as he prepared to leave for Brussels the next day for a meeting of the Organization for Security and Cooperation in Europe. Russian Foreign Minister Sergei Lavrov was barred from that gathering, where foreign ministers trained the wrath and censure of the OSCE’s collective conscience on Russia.

In the decade Makei served as foreign minister, “he had gained a reputation as the main pro-Western voice in the Belarusian regime. It is hardly surprising, then, that his sudden death at sixty-four has given rise to a multitude of conspiracy theories,” writes Artyom Shraibman, a Belarusian military analyst with the Carnegie Endowment for International Peace.

Shraibman believes the late diplomat’s reputation for pro-Western leanings was exaggerated, at least since his failure to persuade Lukashenko to moderate his brutal crackdown on protesters in 2020. But not all of the speculation of a nefarious hand in his death has come from crackpots.

“There may be something very sinister behind his sudden and unexplained death,” Nigel Gould Davis, a former British ambassador to Belarus, tweeted after the cryptic BelTA report of Makei’s passing.

Ukrainian Internal Affairs Ministry advisor Anton Gerashchenko claimed “there are rumors he might have been poisoned” as he was one of the few Belarusian officials not under Russian influence.

“He was always clear against Russian imperialism and a defender of sovereignty. What would he have said (at the) next conference of OSCE which he wanted to attend,” German Bundestag lawmaker Johann Wadephul tweeted, hinting at Makei’s possible public pushback from Putin’s imperialist warmongering.

Carl Bildt, co-chair of the European Council on Foreign Relations and a former prime minister of Sweden, recalled Makeias a leader determined “to prevent his country coming under the control of the Kremlin, and not shying away from describing Moscow’s policies as imperialistic.”

A day before Makei’s death, the little-known Robert Lansing Institute think tank reported the Kremlin had devised “a radical ‘solution’ to the issue of dragging Belarus into Russia’s armed aggression against Ukraine.” Citing unidentified sources in the Russian military leadership, RLI said Putin had ordered the assassination of Lukashenko “or its imitation, with the aim of ultimately intimidating the latter and prompting him to finally order his troops to directly engage in the war on Ukraine.”

Belarus has so far refrained from sending forces to back Russian invaders since the war began on Feb. 24. Makei pledged last year to keep Belarus out of any hostilities as Russian troops and armor massed along the Ukrainian borders in the months leading up to the invasion. He remained silent when Lukashenko apparently stood back and let Putin launch his initial march toward Kyiv from Belarus territory in the early weeks of the war.

Russia’s Foreign Ministry announced Thursday the start of an “intensive combat training” of a joint Russian-Belarusian force, a day after the Security Council in Minsk said it had begun moving troops and armored vehicles in a “counterterrorism exercise” with new Russian recruits.

While Lukashenko has been Russia’s most loyal ally since he came to power 28 years ago, he has been battling political opposition among a young and disgruntled population tired of the oppressive life in Russia’s vassal state. Anti-war sentiment runs high among Belarusians hungering for regime change and escape from the international sanctions imposed for their country’s alliance with Putin’s pariah state.

Putin reneged in September on his promise to the Russian people that no full mobilization of forces for the Ukraine “special military operation” would be necessary. A chaotic recruitment of 300,000 new troops sent twice that number of draft-eligible Russians fleeing to foreign refuge and has damaged public support for the war now dragging through its tenth month with tens of thousands of casualties and little territorial conquest to show for it.

Belarus has been preparing for a possible mobilization of its own. Lukashenko issued an order in September for all Belarusians liable for military service, about 1.5 million people, to register at military enlistment offices by the end of this year.

“The exercise is an extensive test of the mobilization system inspired by Russia’s dismal experience. Lukashenko has openly admitted this during his meetings with generals, urging them to take into account Russia’s mistakes,” Tadeusz Giczan, a London-based journalist and Slavic studies scholar, writes in a report for the Center for European Policy Analysis. He recounts mounting evidence that Belarus is getting more tightly entwined with Putin’s war effort.

The CEPA report cites Belarusian military analyst Aleksandr Alesin on the Shoigu-Khrenin collaboration likely to involve more transfer of weaponry from Belarus to Russia than Belarusian boots on the ground to Ukraine. Alesin said Belarus has sent at least 94 T-72 tanks and 65,000 tons of ammunition to Russia in recent months and that the newly enhanced joint Russia-Belarus defense strategy envisions resumption of production of a Belarusian-Chinese Polonez multiple launch rocket system similar to the U.S.-made HIMARS. The Polonez system uses Chinese-made missiles that Beijing would have to approve for transfer to Russia, a move seen as unlikely as China has maintained a neutral posture toward Putin’s war.

What consequences Makei’s death have for Belarusians’ future remain uncertain. While Lukashenko might seem freer to go all-in with his Kremlin ally, mobilization would risk another outbreak of unrest in Belarus, a country of barely 9 million with meager armed forces to offer.

Putin’s drive to draw Belarus into his unprovoked war could also dissuade China from maintaining its silence over Russian war crimes in Ukraine and the global economic and security destabilization the war has caused.

If Putin has engaged in another attempt at killing a perceived opponent, any role in Makei’s death would reveal the depths of his desperation to press on with a failing campaign of imperialist conquest that has isolated Russia and doomed its future as a major power.

Carol J Williams
Carol J. Williams is a retired foreign correspondent with 30 years' reporting abroad for the Los Angeles Times and Associated Press. She has reported from more than 80 countries, with a focus on USSR/Russia and Eastern Europe.
Previous article
Tall Tales: Fact-Checking Jack London on the Yukon
Next article
Academy for Chamber Music Makes Thrilling Debut