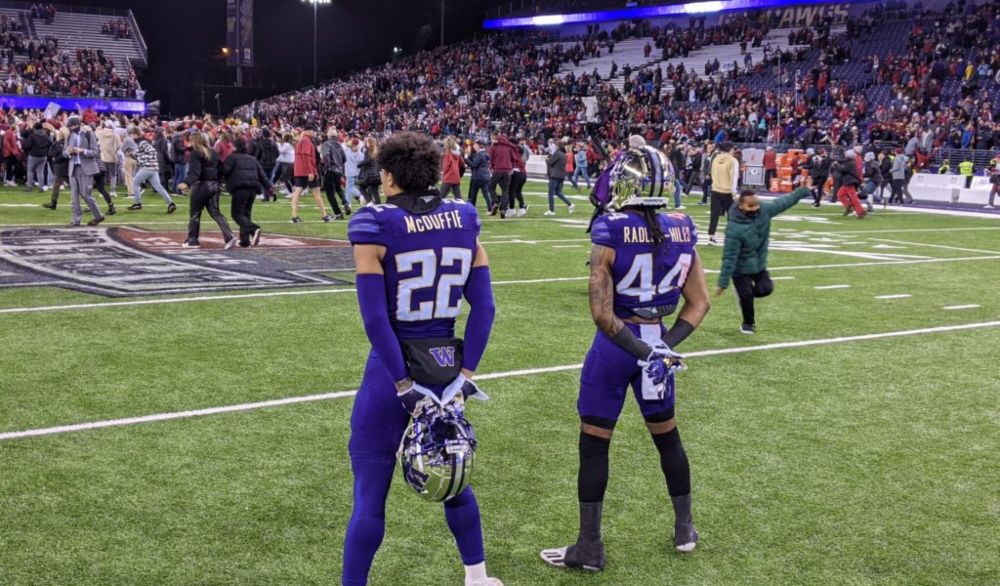 When last we left the Apple Cup, the Washington Huskies were a steaming pile. The Washington State Cougars, 40-13 victors over their elitist, wet-side cousins that ended a seven-game losing streak in the rivalry, were seen stabbing a crimson team flag into the ersatz sod of Husky Stadium. The purple people retched so intensely that rib cages have healed only recently.

Seven months later, their conference, the Pac-12, was stunned to learn its two premier teams in Los Angeles, USC and UCLA, filed for divorce from the league in order to run into the stronger arms of the Big Ten by 2024. Chaos reigned in West Coast football, with the threat of collapse in the air. Rumors had the Huskies joining the Big 10 as well as the Big 12. Rumors also had the smaller-budget Cougars being consigned to the Mountain West Conference hinterlands.

But as the 2022 season plays out, realignment talk has moved to the margins. The Huskies and Cougars were surprisingly successful. Even the preyed-upon Pac-12 might regain a smidgen of dignity if sixth-ranked USC (10-1) is selected for a berth in the four-team College Football Playoffs field.

As an industry, big-time college football makes a crypto-currency exchange operated out of the trunk of a Ford Pinto seem like the Federal Reserve. The kid-grid business has abandoned its pretense of guardrails and is now a lawless frontier replete with pirates, ogres, orcs, mountebanks and con artists. The tawdriness was so profound that it appeared UW and WSU might be unable or unwilling to plunge into the mud of name/image/likeness bribery, the skullduggery of the transfer portal and the surrender of the control of the game itself to the soulless cretins of the cable-TV networks.

Which gets us to 7:30 p.m. Saturday in Pullman, where the 9-2 and 13th-ranked Huskies meet the 7-4 Cougars in the 118th renewal of the state’s oldest invective festival. It will be a match with stakes beyond the rivalry, featuring teams on an uptick that accept the frozen darkness of the Palouse as a proper FOX Sports theater for proving they can get as metaphorically dirty as everyone else in college ball and come out ahead.

The most surprising development from a year ago at this time, when neither team knew the identity of their next head coach, is that both have winning records and bowl eligibility despite embarrassing circumstances that forced each school into mid-season firings.

Normally, an abrupt change in coaching staffs produces disruption sufficient for setbacks in the first year. But as suggested above, normal is no longer an operative word in college ball.

It would appear, based primarily on won-loss records, that newbie coaches Kalen DeBoer and Jake Dickert have operated well in the new world. Credit also goes to those university agents who marshal wealthy boosters to volunteer huge sums of money to pay college athletes, now that amateurism has gone the way of slavery and indentured servitude.

Dickert’s ascension to the top WSU job was an emergency staff promotion following the mid-season firing of Nick Rolovich and four assistants, all of whom refused to comply with a state vaccination mandate for state employees. Claiming a religious exemption denied by the school administration, Rolovich is suing the state for $25 million. Dickert took over the Cougs and finished 2021 with a 3-3 record, including the Apple Cup win, which produced a memorable celebration on the Montlake grounds that will be the topic of much discussion this week. Reward for helping deliver WSU’s biggest margin of victory in the series came the next day when Dickert was given was given the full-time job and a four-year contract despite previously never having been a college head coach.

The arrival at Montlake of the more experienced DeBoer from Fresno State was the slightly more customary hire after a season, but almost equally awkward, given the unseemly exit of his predecessor. It came four days after the Apple Cup left the Huskies with a 4-8 record and followed the firing of the pugnacious, mendacious Jimmy Lake. The second-year UW coach was caught during the Oregon game by national TV cameras swatting at one of his players, then denying it afterward. Somewhere in the UW hiring process there lies a painful truth that Lake’s boss, athletics director Jen Cohen, and his predecessor, Chris Petersen, completely whiffed on the absence of Lake’s chops for the top football job.

By this week, the stench of the twin debacles of Rolovich and Lake has drifted away. The cool breeze isn’t all due to checkbook recruiting (no public accounting of the outsider funds is required, or offered). The new coaches each hired quarterbacks from other schools (seven of the Pac-12 schools started transfer QBs), who flourished almost instantly, thanks in part to installation of systems to exploit their strengths.

Huskies QB Michael Penix Jr. , a fifth-year junior from Florida whom DeBoer coached before at Indiana, has been a revelation, becoming the national leader in passing yards. For a college franchise whose legacy includes a litany of wicked running backs, I stare in wonder — holy Hugh McElhenny/Robin Earl/Joe Steele/Napoleon Kaufman/Greg Lewis/Myles Gaskin, what happened?

This time, the Huskies guessed right on a coach who could innovate as well as behave.

After a 54-7 win over Colorado Saturday made DeBoer the first coach in program history to win nine games in his first season, he was rewarded Tuesday with a contract extension through 2028. He’ll start his second season pulling down $4.2 million as the state’s highest-paid employee.

“This is what I feel: I feel this is a championship-caliber program,” DeBoer told reporters Monday, the day before the school announced the extension. “It was just a matter of how quickly we could get to this point. Now we can talk a bit more about us being close to that. Nine wins, I think, starts putting you in those conversations. Ten does, obviously.”

If the 10th win comes Saturday in Pullman, it could propel UW into next week’s Pac-12 championship game against USC in Las Vegas. But that step requires a few outcomes at other regular-season-ending games. Even if the Huskies don’t make the title game, there’s a chance that, if the Trojans were selected for the CFP, UW could be invited to the Rose Bowl as the Pac-12’s second-best team.

None of these lofty heights were imaginable a year ago for Huskies adherents following the season, when the first go-round combining NIL money with transfer mania appeared to leave the UW in ruins. As a reminder, here’s how running back Sean McGrew, a graduating senior, described the feeling.

“The words I want to use, I’m not allowed to say . . . just chaos,” he said. “We weren’t really expecting the games and the season to turn out the way they did at all, whatsoever. We had expectations for ourselves and came up short on about all of them.”

After beating sixth-ranked Oregon 37-34 in Eugene two weeks in one of the great games in Huskies history, the single-season bounce-back from the despair in McGrew’s words is remarkable. Adding a win over the Cougars in Pullman could produce a bed of roses from the steaming pile.

It is true that UW caught a scheduling break, skipping USC and Utah this season. But still on the table is the argument that maybe the Trojans and Utes caught a break too.

The turnaround may be sufficient to persuade Penix to skip the NFL draft and play his final year of eligibility at Montlake. At least now, we know the Huskies can come up with the funds to compete with salaries in the lower rounds of the draft.

Then again, perhaps the Cougars fancy Penix in crimson and gray. In the lawless frontier of college football, one is wise to never assume anything.

Art Thiel
Art Thiel is a longtime sports columnist in Seattle, for many years at the Seattle Post-Intelligencer, and now as founding editor at SportsPressNW.com.
Previous article
In the Age of Information: Still Amusing Ourselves to Death
Next article
Women Lawyers Defying Trump

The Longest Game: Mariners Trickle out of the Playoffs