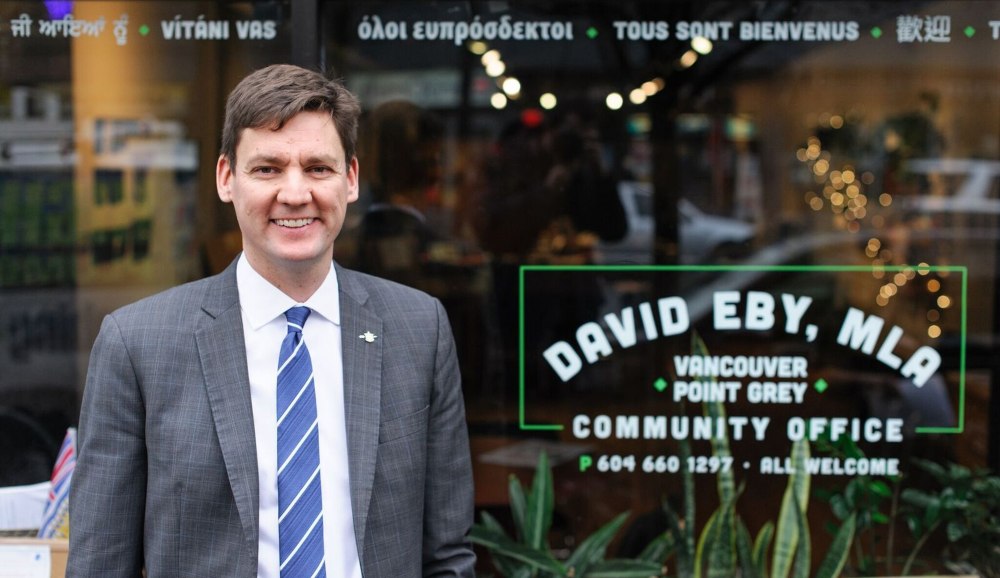 Ex-Attorney General David Eby was officially declared leader of British Columbia’s governing New Democratic Party on Friday and will later this fall succeed John Horgan as premier of Canada’s province on the Pacific.

Eby, 46, has followed an unusual path to the premiership.  He began his legal career working in Vancouver’s drug-ridden Downtown Eastside and later was executive director of the British Columbia Civil Liberties Association.  He is a former president of the Canadian HIV/AIDS Legal Network. He has played in two rock bands.

He entered the British Columbia Legislature in 2013 after defeating then-Premier Christy Clark in the Vancouver-Point Grey Riding (electoral district).  “David has been one of the hardest working members of my cabinet: When I was opposition leader, he was our hardest working critic,” Horgan told a news conference.

The center-left New Democrats scheduled a leadership election after Horgan, a two-time cancer survivor, announced his intention to step down.  No fellow NDP legislator chose to oppose him, but an environmentalist named Anjali Appadurai jumped into the race with backing from groups that have mounted anti-logging and anti-pipeline protests.

Under the parliamentary system, the public does not vote directly for a premier or prime minister.  They vote for individual members of Canada’s parliament or the provincial legislature.  The party winning a majority of seats forms the government.  When a premier resigns or is forced out, party members – not the public – vote on his or her successor.

The goal of campaigns in a leadership election is to sign up new party members. After an investigation by the party, the New Democrats’ executive disqualified Appadurai, finding improper involvement of outside groups in her campaign.  And members of the Green Party were signing up as newly minted New Democrats to vote for the young activist.

It turns out the green groups engaged in tactics that would have made an old time ward boss green with envy. Investigator Elizabeth Cull reported on a Sept. 7 meeting between Appadurai and environmental grandee and CBC TV host David Suzuki.

Suzuki told her “that he and his family had all signed up for NDP memberships to vote for her.”   Suzuki then excused himself “because he was headed to a Green Party fundraiser.” Cull reported: Ms. Appadurai thanked Mr. Suzuki for doing this and did not address the fact that he could not join B.C. NDP if he was a supporter, in this case participating in fundraising of a different party.”

Hence, Eby will be acclaimed party leader and premier-designate.  “There is no vote because one of the candidates violated the rules,” Horgan said Thursday.

Premier Horgan will host a last meeting of Canada’s premiers in November. The New Democrats hold a big majority in the British Columbia Legislature with two years left in their governing mandate.  Eby will face a tough new Liberal Party opposition leader, former provincial cabinet minister Kevin Falcon. The Liberals are in the process of changing their name because they aren’t very liberal.

Eby has held the attorney general and housing portfolios in the British Columbia cabinet and was given the job of straightening out management in the scandal-plagued Insurance Corporation of British Columbia.  He is credited with creating a no-fault auto insurance system called Enhanced Care, which has lowered premiums for many customers.

The New Democrats have created big provincial parks across British Columbia.  In the far northwest corner of the province, an NDP government preserved a world-famous rafting stream, the Tatshenshini River, and vetoed a vast proposed open-pit mine.  The center-left party also preserved farmland from development in the populous Lower Mainland and Okanagan Valleys.

Yet, the Horgan government has been plagued by direct-action protests against logging of old-growth forests, particularly on Vancouver Island. The R.C.M.P. has arrested more than 1,100 people at a blockade at Fairy Creek.  The New Democrats’ political base includes both labor unions and environmentalists, constituencies often at loggerheads.

The avuncular, outspoken Horgan, a lacrosse player in his youth, has been a popular premier.  He got on well with Gov. Jay Inslee.  Both men have pushed for future high-speed rail service in the I-5 corridor. Horgan joined the governors of Washington, Oregon, and California earlier this month to promote carbon emission reduction up and down the West Coast.

Horgan represented a Vancouver Island riding along the Strait of Juan de Fuca.  Eby is more a Vancouver politician, whose constituency includes the University of British Columbia and neighborhoods along English Bay. Eby is married to a nurse who is getting her medical degree at U.B.C.

Eby has promised, as premier, to implement a “flipping tax” designed to discourage real estate speculation that has driven up housing prices.  It would tax those who buy residential properties as an investment, only to turn around and sell them.  The tax would fall to zero if a home is held for two years.