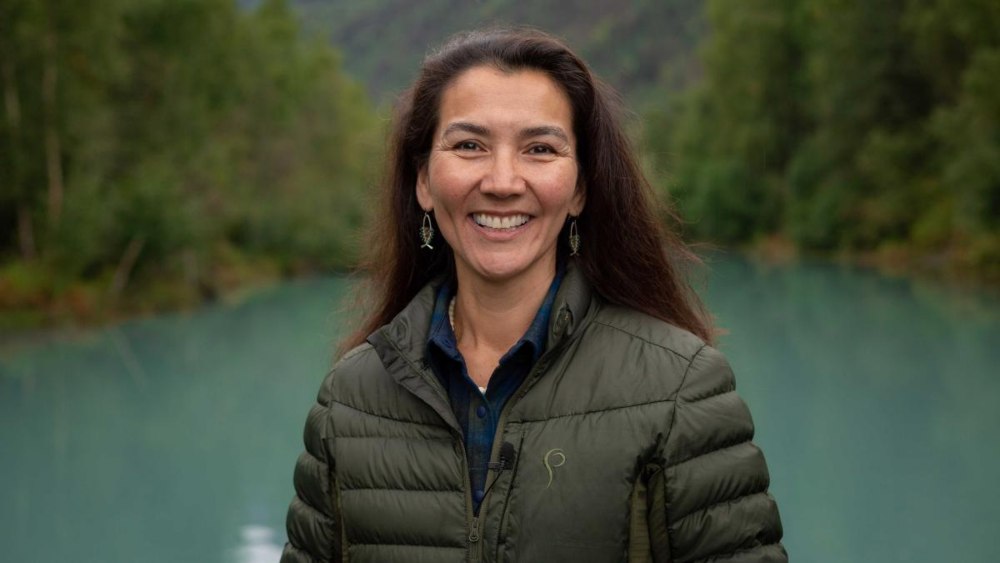 The narrative of Alaska’s newly elected Rep. Mary Peltola, the 49th state’s first new member of Congress in 49 years, can be described as a fish story. “We are all fish people,” Peltola, 48, a Democrat and Alaska native, told a Seattle fundraiser on Wednesday night.  She sure is.  Peltola began fishing on the Kuskokwim River when she was 6, became captain of her boat at 14, and as an adult served as executive director of the Kuskokwim Intertribal Fisheries Commission.

She won a special election in August to fill out the term of Alaska’s “Congressman for Life” Don Young, who died last spring after spending nearly a half-century in the House. She is facing a rematch in November against two Republicans, ex-Gov. Sarah Palin and Nick Begich. The winner will fill Alaska’s lone U.S. House seat for the next two years.

Peltola sang the praises of Sen. Lisa Murkowski, R-Alaska, an anti-Trump Republican who is also up for reelection this fall.  “I know Lisa and I really look up to her,” said Peltola. “Whenever there is a (government) shutdown, Lisa and a few other critical people work in a bipartisan way.” When Peltola was a new mother and newly minted Alaska state legislator, Murkowski as mother of a five- and eight-year olds (Matt and Nick) gave parenting advice.

Back to the fish story, Peltola added, Murkowski puts “issues over partisanship.” The Alaska senator has led a so-far-successful campaign to keep genetically engineered salmon — she labels them “Frankenfish” — off the market.

Fisheries is a big issue in Alaska.  Bristol Bay saw a phenomenal 78 million salmon return this year.  But the Kuskokwim River has seen its fishery crash in recent times. Climate change has triggered alarm.  The Bering Sea is warming more rapidly than oceans in temperate zones, and the Arctic is warming to two to three times faster than the rest of the planet.

The state of fisheries prompted Peltola to run for Young’s House seat. She warned in House testimony last year: “Ecologically, the Bering Sea is undergoing declines at an alarming level.  In 2021, decades-long trends of declining Chinook salmon stocks continue and fisheries throughout Western Alaska were closed.”

Election to Congress has given Peltola a chance to do something about it.  She was quickly given a seat on the House Natural Resources Committee.  The panel is rewriting the Magnuson-Stevens Act, which sets management rules for fish stocks in federal waters.  It is named for two men who served a total of 75 years in the Senate, Sens. Warren Magnuson, D-Wash., and Ted Stevens, R-Alaska. (“Alaska and Washington are very closely aligned,” Peltola joked Wednesday night.) Peltola wants to amend Magnuson-Stevens to protect Alaska subsistence fishing and place strict limits on trawlers.  Trawler fishing, largely by boats from out-of-state, is blamed for decline of the Kuskokwim River fishery.

She is also seeking to reserve two seats for Alaska tribal members on the North Pacific Fishery Management Council. “The reason that this effort came about is because the process of working with the council works well for the biggest, the wealthiest, and the most connected among us, but if you don’t happen to be big and wealthy and the most connected, it is very hard to get any inroads in the council process,” she told a forum Tuesday in Kodiak.

Sarah Palin took a more ideological position at the Kodiak forum: “The federal government needs to get off our back. It needs to get back on our side and allow Alaska primacy, the access to our resources.” To which Peltola responded: “If we are not at the table, we are on the menu.”

Odds are that Democrats will lose control of the House in next month’s election.  Two of the Democratic party’s best chances to pick up seats in Congress are in these parts — if Peltola holds onto Young’s old seat in Alaska, and if Marie Gluesenkamp Perez beats radical MAGA Republican Joe Kent in Washington’s 3rd District.  Both are moderates.

Alaska leans Republican — Trump carried the state by ten points in 2020 — but its voters have an independent, libertarian streak.  The Tea Party movement toppled Murkowski in the 2010 GOP primary, only to see her come back to win reelection in November with a write-in campaign.  Alaska natives are significant players.

Peltola won her seat thanks to Alaska’s new ranked-voting system, by which voters rank their choices in numerical order. The top four primary finishers advance to the November ballot.  If no candidate wins a majority, bottom dwellers on the ballot get eliminated and the second choices of their voters get tabulated and apportioned to the top two finishers.

Sarah Palin has become unpopular in the 49th state, since resigning as governor in 2009 to make money with lectures and speaking gigs.  She was attacked by Begich for skipping out on the state. Begich was eliminated, and enough of his second-places choices went to Peltola to give her the win.  Palin and ex-President Trump loudly protested, but ranked choice was the decision of Alaska voters.  The new system rewards collegial candidates over polarizers, and is helping both Democrat Peltola and Republican Murkowski in this year’s election.

Peltola extolled Alaska’s investment in renewable energy before her Seattle audience but defended the need for her state’s oilfields and pipelines.  She was bipartisan with praise, giving a nod to President Biden on college debt relief, but with warm words for Don Young for his work on fisheries legislation.

Like the returning salmon she began catching as a little girl, Mary Peltola is adapted to the habitat of the vast and unique state from which she comes. Will voters return her to Congress next month?

Joel Connelly
I worked for Seattle Post-Intelligencer from 1973 until it ceased print publication in 2009, and SeattlePI.com from 2009 to 6/30/2020. During that time, I wrote about 9 presidential races, 11 Canadian and British Columbia elections‎, four doomed WPPSS nuclear plants, six Washington wilderness battles, creation of two national Monuments (Hanford Reach and San Juan Islands), a 104 million acre Alaska Lands Act, plus the Columbia Gorge National Scenic Area.
Previous article
How Ukrainians are Defending the Values Americans Claim to Hold
Next article
Peter Bacho’s New Book: The Complex Fate of Filipinos in Seattle