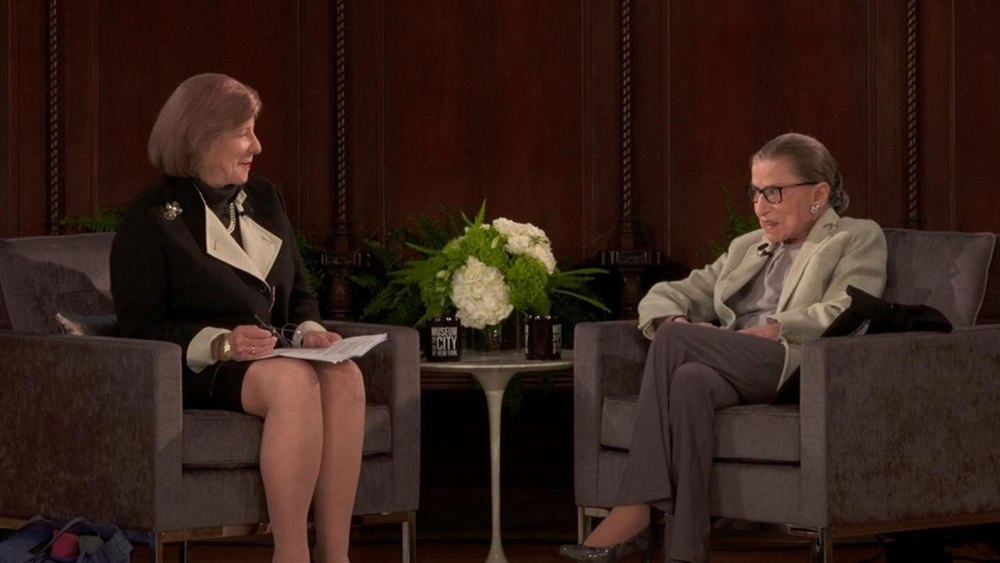 Nina and Ruth: A Beautiful Friendship with Serious Consequences

A young National Observer reporter, Nina Totenberg, phoned Rutgers law professor Ruth Bader Ginsburg in 1971, intrigued at a brief in which Ginsburg argued that the 14th Amendment’s equal protection clause applied not just to race but to gender. The case of Reed v. Reed eventually reached the Supreme Court where Ginsburg would one day serve.  It was her first win.

Borrowing Bogart’s line from Casablanca, this was the beginning of a beautiful friendship.  Ginsburg became, for Totenberg, “one of my first translators of the finer points of law.”  It grew to be a power friendship, as Totenberg became Supreme Court reporter for National Public Radio, and Ginsberg served 27 years on the U.S. Supreme Court.

Dinners with Ruth: A Memoir on the Power of Friendships (Simon & Schuster, $27.99) is a delightfully written book that has become a controversial book.  Totenberg recounts how a reporter and a subject of her reporting broke bread together, traveled to judicial conferences, and supported each other “through great personal jobs and also deep personal sadness.”

“I never got a scoop from her,” says Totenberg, an explanation doubted by critics of the book.  Yet, she knew intimate details of Ginsburg’s health as the justice battled kidney cancer, lung cancer, and pancreatic cancer. The journalist’s physician husband attended to Ginsburg at the time of her death, just before the 2020 election.  Donald Trump and Mitch McConnell moved with lightning speed to fill the Supreme Court vacancy with conservative Amy Coney Barrett.

Male critics of Totenberg’s book, from law professors to a sneering Tucker Carlson, can’t appreciate roots of the Totenberg-Ginsburg friendship.  Both women were barrier breakers in guy-dominated professions.  White shoe law firms would not hire future Supreme Court justices Ginsburg and Sandra Day O’Connor despite sterling records in law school.  A lawsuit was required to get women writing roles at Newsweek.

When National Public Radio did hire a nucleus of talented women, their desks at NPR became known as “the fallopian jungle.” “It was great to be a pack and not a solo act:  There was safety – and power – in numbers,” writes Totenberg.

What’s wrong with that?  Male network bigwigs and power brokers have broken bread for generations.  So, prominent women in Washington, D.C., bonded and had each others’ backs.  An informal support group that dubbed itself “Ladies Who Lunch” met monthly at Morocco’s in D.C. “In newsrooms and workplaces dominated by men talking sports and, more to the point, frequently talking over us, this was a refuge,” Totenberg writes.

Ginsburg and her husband Marty, with Totenberg and her first spouse ex-Colorado Sen. Floyd Haskell, became regular dinner companions and frequent companions at the opera, sometimes in company with conservative Supreme Court colleague Anthony “Nino” Scalia.  Totenberg describes Scalia as “a mensch” and celebrates the cross-ideology friendship of Ginsburg and Scalia.

Alas, Haskell slipped on ice and suffered neurological damage.  Five long years of care followed.  The friendship assumed new dimensions as Ginsburg bolstered Totenberg, told her to get out of the hospital room and go back to work.  “Where once the phone had been a professional bond between us, now it was a personal lifeline,” Totenberg writes.

Ginsburg would officiate at Totenberg’s second marriage to Boston surgeon David Reines.  As Ginsburg’s health problems intensified, Totenberg and her husband became both personal and professional lifelines.  During the COVID-19 pandemic, their home was the widowed Ginsburg’s only outside destination.  The justice grew so weak she needed a bodyguard’s help in climbing the six steps into the Totenberg-Reines residence.  She loved the bouillabaisse, but once fell asleep in the middle of a meal, a fork still in her hand.  The justice was dying.

As the offspring of a female journalist in a then-male profession, and later the partner of a lawyer who faced hiring barriers, I am moved by Totenberg’s tales of mutual support.  I witnessed my mother seethe after she was given a Time-Life correspondent’s award but described as “our little scout in the Northwest” by Henry Luce.  The scout would climb to 11,000 feet on Mt. Kennedy in the Yukon, to write for Life magazine the story on Sen. Robert Kennedy’s first ascent of a mountain named for his brother.

But there are unsettling aspects to Totenberg’s book.  Both the reporter and the Supreme Court justice rose to national prominence in their professions.  Celebrityhood can turn even the coolest of heads.  Totenberg traveled the country doing on-stage interviews with Ginsburg.  Ginsburg knew in advance what she would be asked.

In a strained defense, Totenberg writes: “I learned it was better if I shared the topic with her in advance. It gave her time to think about it, and almost always she would have things to say that were interesting.  . . But if I ambushed her without warning, it didn’t work.  She was very good at deflecting. All the justices are: It’s part of their job.”

It is not the role of a journalist to slip questions in advance, in order to make the interview subject sparkle. Apparently, it was a lucrative gig for Totenberg, doing on stage interviews with Ginsburg before adoring sold-out audiences.  As well, Ginsburg delighted in the late-life notoriety that came from a law student’s blog entitled “Notorious R.B.G.,” a play on the name of slain rapper Notorious B.I.G.

Getting too close, even while not getting scoops, has its dangers. The younger Totenberg was a ferocious journalist. She did a seminal piece, “The Last Plantation,” on the Supreme Court’s exploitation and mistreatment of its support staff.  (A major villain:  William O. Douglas.) Totenberg broke the story of law professor Anita Hill’s sexual harassment complaint against Supreme Court nominee Clarence Thomas.  She is hated to this day by right-wing media.

O.K., Ginsburg did not tip off Totenberg.  The more basic question:  Did Totenberg befriend so many influential people, including such conservatives as Scalia and ex-Solicitor General Ted Olson, that the edge came off her reporting?  She had a fiery faceoff with Sen. Alan Simpson, R-Wyoming, during Thomas’ confirmation.  But she and Simpson later became friends.  “We were the bells of the ball,” Totenberg proudly writes, when she made Simpson her guest at the Radio and TV Correspondents Annual Dinner.

Ginsburg spurned President Obama in 2013 when he invited her to the White House and gently suggested she retire from the Supreme Court.  The justice’s wish was to wait until Hillary Clinton was in the Oval Office. “She wanted desperately to give the first female president the power to nominate her successor,” writes Totenberg.  “It was a gamble, and she lost.”

So did the Republic.  Amy Coney Barrett cemented a 6-3 conservative “super-majority” on the Supreme Court and paved the way for overturning Roe v. Wade.  Ginsburg wrote a famous dissent when the Supremes eviscerated the 1965 Voting Rights Act, opining: “Throwing out preclearance when it has worked and is continuing to work to stop discriminatory changes is like throwing away your umbrella in a rainstorm because you are not getting wet.” As this review is written, the court is hearing arguments and poised to cut out what remains of the landmark civil rights law.

Totenberg could have, should have, acted with her knowledge of Ginsburg’s health problems.  By airing what she knew, she could have strengthened Obama’s retirement argument, made while Democrats controlled the Senate.  Even without violating patient confidentiality, she could have reported Ginsburg’s rapidly deteriorating health in the summer of 2020.  The press could have pressed Republican senators, up for reelection, to go on the record. Would they push through a Supreme Court nomination before the election?

The time comes when professional duty and – yes – friendship require that you make clear to someone that the time has come to hang it up. By hanging on, with Totenberg silent on the subject, Ginsburg enabled political conservatives to complete their long-plotted takeover of the U.S. Supreme Court.

Architects of the takeover demonstrated their ruthlessness even with death. Senate Majority Leader McConnell and House GOP Leader Kevin McCarthy refused to allow Ginsburg’s body to lie in state in the U.S. Capitol Rotunda.  House Speaker Nancy Pelosi arranged for a ceremony and viewing in Statuary Hall.

I am conflicted by this book.  Justice Ginsburg upheld and expanded rights of Americans with her service on the court.  Totenberg has been a mostly fearless barrier breaker for women in journalism.  Dinners with Ruth speaks to the goodness of some people in influential places, and the vital role of helpmates in life.

Yet, ultimately, Totenberg was too protective.  Buoyed by adulation, Ginsburg lost focus on passing the torch.  As a result, the country got torched.

Joel Connelly
I worked for Seattle Post-Intelligencer from 1973 until it ceased print publication in 2009, and SeattlePI.com from 2009 to 6/30/2020. During that time, I wrote about 9 presidential races, 11 Canadian and British Columbia elections‎, four doomed WPPSS nuclear plants, six Washington wilderness battles, creation of two national Monuments (Hanford Reach and San Juan Islands), a 104 million acre Alaska Lands Act, plus the Columbia Gorge National Scenic Area.
Previous article
Is Brazil Really Done with Balsonaro? Previous President Lula Makes a Comeback
Next article
The Books they Ban: A Novel about the WWII Internment of Japanese