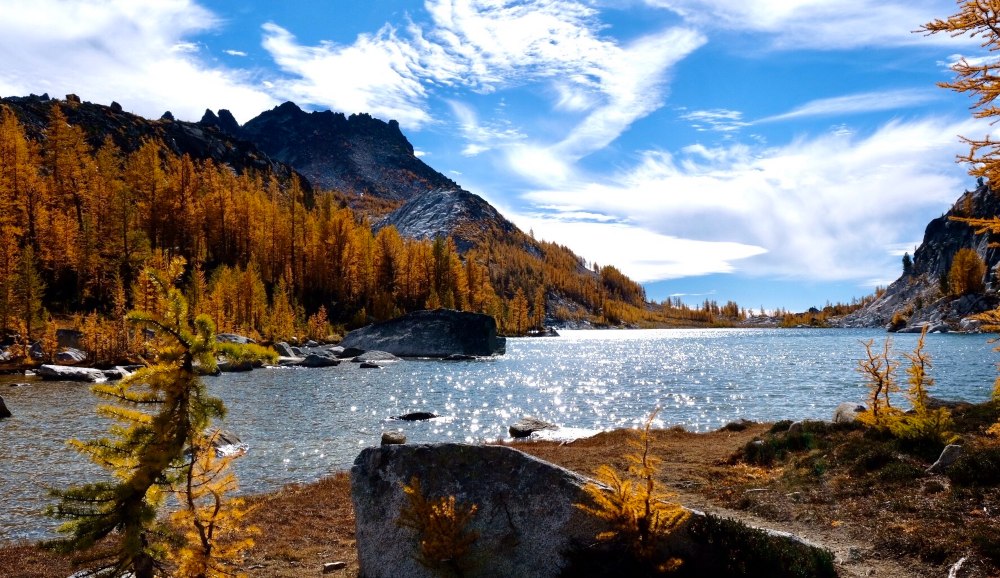 When Bill and Peg Stark did their first autumn scramble up into the remote, 7,000-foot-high Enchantment Lakes above Leavenworth, and witnessed the gold needles of Lyall’s Larch trees, “It felt as if we were the first people ever to see the place,” Bill Stark later recalled.

He was not quite right. Famed climber Fred Becky had made such first ascents of Prusik Peak, and christened spires of the Wenatchee Mountains with such names as the Boxtop, the Blop, and the High Priest.  The High Priest later gained a nickname due to a protruding rock resembling the proboscis of our 37th president:  “Nixon’s nose.”

The Starks relocated in retirement from Seattle to Leavenworth and explored the Enchantments and surrounding Lost World Plateau in all seasons. They returned annually during the “golden week,” to a camp they called Marmot Manor amid a larch grove above Lake Viviane and Excalibur Rock, which they named.  One year, a high school jazz ensemble from Snohomish County lugged in instruments and did an evening serenade across the lake.

The Enchantments have since achieved national and international renown.  They have come to symbolize the first week in October, when larch needles backlit by the sun draw thousands of hikers to the east slope of the Cascades, as well as to the Canadian Rockies and Purcell Mountains north of the border.

The U.S. Forest Service has limited visitation, established a preseason lottery for day use and camping permits, not long ago extending the season from May 15 to October 31.  As well, limits apply in the penumbra of the Enchantments, the nearby area of Snow Lakes, Colchuck and Stuart Lakes, plus Eightmile and Caroline Lakes. All are famed beauty spots of the Alpine Lakes Wilderness Area.

The Okanogan-Wenatchee National Forest had to act.  In pre-permit times, I loved to hang out at 7,780-foot Aasgard Pass or higher on Enchantment Peak, watching the line of people climbing up 2,200 vertical feet in less than a mile from Colchuck Lake.  The line suggested World War II photos of Tito’s partisans behind German lines in Serbia.

Other famous larch destinations get mobbed.  Parking and turning around becomes an exercise in mountaineering skill on the North Fork, Teanaway River road out of Cle Elum. It is trailhead to vastly popular Ingalls Lake and Longs Pass, but also more remote Lake Ann.  Ditto cars jam the trailhead off Rainy Pass, on the North Cascades Highway, takeoff point for the popular Maple Pass loop.  Visit these places on a weekday.

Similar scenes play out in the Great White North.  A ranger plays traffic cop, allowing cars one-by-one onto the Moraine Lake Road, near Lake Louise in Canada’s Banff National Park, as other vehicles leave.  Famous in its own right – Moraine Lake has decorated Canadian currency – the lake is starting point for the trail up to Larch Valley and Sentinel Pass, an epic golden place on the shoulder of 11,627-foot Mt. Temple.

The Canadian Rockies boast a comfortable if pricey alternative to risking a fall snowstorm in high larch country.  (Lyall’s larches are found only above 6,500 feet.) Two famous golden week destinations, Lake O’Hara and Mt. Assiniboine, have backcountry lodges and cabins where gourmet meals and down comforters end your day traversing high routes to alpine tarns. Reservations at both need be made months in advance.

Why the vast popularity? As one Canadian writer put it, “There are many ground plants that introduce reds and oranges, but if you’re looking for beautiful fall colors in our trees, there is really only one tree people care about: Lyall’s Larch.”

Lyall’s larches, also called alpine larch, are deciduous conifers.  The trees drop their needles in a brief blast of green turning to yellow turning to gold over a three to four week period from mid-September to mid-October. They share timberline habitat with subalpine fir and Whitebark pine.  (Beetle infestations have endangered the Whitebark pine, whose cones are best known as nutritious grizzly bear food.)

Lyall’s larches can grow only at low temperatures and in rocky soils.  Bring one back to sea level and it will wither and die in the heat.  The trees can cling to ledges, but usually grow in groves. They grow to be spectacularly gnarled, and very old. One on the east slope of the Rockies in Alberta was in 2012 and dated as 1,917 years old.)

Where to experience golden colors without the crowds.  The trail up Entiat Rover leads to the Larch Lakes and higher, more remote Ice Lakes on the shoulder of 9,000-foot Mt. Maude.  Both are gorgeous if strenuous destinations.  Once, puffing up to Larch Lakes, a friend and I encountered a party of old boys from Chelan, who offered us a shot of Black Velvet and Tang to recover.

The Twisp Pass hike, out of the Methow, takes you into a high, golden basin on the boundary of North Cascades National Park.  Be sure to camp on the Forest Service side, or press on to a high tarn on the shoulder of Mt. Rennie.  High country of the Chelan-Sawtooth Wilderness offers multiple uncrowded lake and larch experiences.

My favorite alternative, however, is Cathedral Provincial Park at the east end of the Cascades in British Columbia.  It has a lodge and cabins as well as a campground at 6,800-foot Quiniscoe Lake, with the lodge folk driving you up a fearsomely steep jeep road.  Circling the lake is an 8,000-foot-plus ridge with larches, views out to the entire Cascade Range, mountain goats and ptarmigan.

A cabin at Cathedral beats a tent when a fall storm blows in.  One year, my group waited out a night of blowing snow with a warm fireplace and single-malt Scotch, waking up hung over but with morning sun on glistening newly fallen snow and gold larch. (Call the lodge at 250-226-7560 for jeep trip and/or lodging reservations.)

Or you can study the Okanogan-Wenatchee National Forest website and get ready to pounce.  Gary Paull, a retired Forest Service trails and recreation manager, did just that last week, with a post of 17 pictures and the caption: “Last Sunday night, I found that there was one permit available for the Lae Caroline areas in the Enchantments. I snagged it and departed at oh-dark-thirty Monday morning for Leavenworth with three days on the permit.  Weather was perfect – frosty mornings, warm afternoons, and smoke from fires . . . blowing to the west well to the north.”

A controversial Enchantment experience has come to the fore over the past five years.  Super in-shape hiker-climbers go in and out, or do a 17-mile traverse, all in one day.  My 20-something friend, a world class kayaker and a medalist at the Pan American Games, went up and in last year.  Critics claim the “Enchantment runners” step on plants, but I can never see my friend Keenan doing any such thing.

Keenan sent me pictures. One shot was taken of 8,000-foot Prusik Peak with a back-lighted larch grove in the foreground.  Over a decade of pre-lottery golden week visits, our favorite camp spot was Gnome Tarn at the edge of this grove.