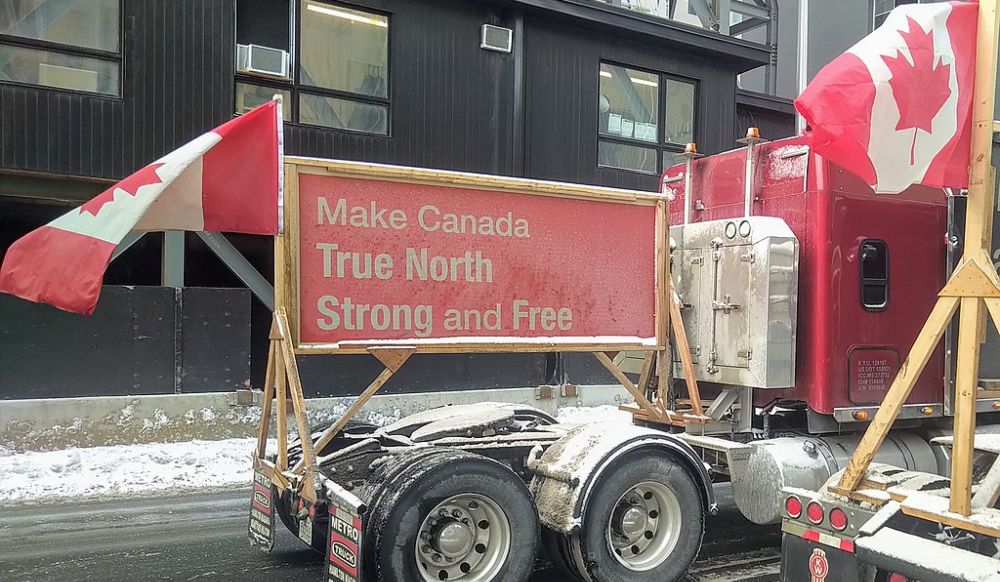 Grumpier and Trumpier: Canadian Politics and the Distemper of our Times

Settled on the principles of “peace, order, and good government,” Canada has enjoyed and endured its reputation as a staid and low-key country.  “Maybe we should invade North Dakota,” Sondra Gotlieb, wife of Canada’s then-Ambassador to the United States, once joked, lamenting lack of attention given to the Great White North.

But the country is getting edgier of late. Canada is seeing more angry confrontations, symbolized by the “Freedom Convoy” that occupied and disrupted downtown Ottawa in February.  That outbreak began as a truckers’ protest directed at COVID-19 vaccination requirements but came to embrace a variety of fringe causes.  The protesters demanded removal of Prime Minister Justin Trudeau, five months after an election returned his government to office.

A Trumpification of Canadian politics?  Some hope so. Fox News pundits and an ex-president in the US cheered the blocking of border crossings.  “The Freedom Convoy is peacefully protesting the harsh policies of far-left lunatic Justin Trudeau who has destroyed Canada with insane Covid mandates,” Donald Trump proclaimed.  Money to support the protest flowed north across the 49th Parallel.

Canada has one of the world’s highest vaccination rates.  The anti-vaxxer Peoples Party of Canada took just 5 percent of the vote last September and failed to win a single seat in parliament.  Trudeau’s Liberal Party has prevailed at the polls in 2015, 2019, and 2021.  Although short of a House of Commons majority, it governs with support from the left-of-center New Democratic Party.

Still. There is genuine frustration, centered in the conservative Prairie provinces of Alberta and Saskatchewan, as well as protest that is taking on a new nastiness.  Gravel was thrown at Trudeau during last fall’s campaign.  New Democrats’ leader Jagmeet Singh, a practicing Sikh, was confronted with obscenity-shouting protesters in Peterborough, Ontario, during a provincial election appearance. It got ugly. The NDP leader was called a “traitor,” heard shouts wishing him dead, with one protester shouting “Cut your turban off.”   Singh described the episode as “one of the most intense, threatening and insulting” in his career, and that his aides feared for their safety.

Trudeau was forced last week to cancel an Ottawa-area appearance when anti-Liberal protesters gathered outside a brewery where he was to speak.  One carried a Canadian flag emblazoned with a “Fuck Trudeau” message.  The Prime Minister canceled a Surrey, British Columbia, appearance in May due to a raucous protest.

“Since the beginning of the COVID-19 pandemic, ideologically motivated violent extremist activity has been fueled by an increase in extreme anti-authority and anti-government rhetoric, often rooted in weaponization of conspiracy theories,” Cherie Henderson of the Canadian Security Intelligence Service told a parliamentary committee in May.

B.C. Attorney General David Eby is set to become the province’s premier later this year.  Premier John Horgan is leaving office in December. Eby took note of the climate in a Vancouver Sun interview last week, saying: “It’s not a left-right issue. I look at old-growth protesters blocking highways and anti-vaxxers smashing windows and blocking hospital entrances. And I also look at the rise in racism and anti-Asian racism, in particular. And I know that we have a lot of work to do to heal those divisions, to heal the social fabric in British Columbia.”

The Canadian government announced in late June that members of parliament will be given panic buttons to call police in an emergency, as a result of growing harassment incidents, intimidation, and threats of violence.  The “very negative and toxic rhetoric that we see on-line” is concerning, said Public Safety Minister Marco Mendicino. MPs have been offered cameras and home alarms and de-escalation training.  “We need to have a space where we can have vigorous debate without seeing the level of vitriol and near physical confrontation and out-and-out incitement to violence and death threats,” said Mendicino. The government was also mindful of the assassination of two popular British MPs

Canada is not coming apart.  The cause of Quebec separatism has been on the wane since coming within 30,000 votes of victory in a 1995 sovereignty referendum.  Nor has the cause of Western separatism, nicknamed Wexit, ever progressed beyond the noise-making stage.

Which is not to say there isn’t alienation on the Prairies, in a region which finds itself a perpetual part of the Opposition in Ottawa. The government of Saskatchewan Premier Scott Moe is looking at ways to increase his province’s autonomy.  “The premier has been speaking about some sort of independence from Ottawa for quite a while in terms of the economy,” said ex-MP Allan Kerpan, tapped earlier this month to lead a series of meetings on how the province will assert itself.

The opposition Conservative Party of Canada has lost three consecutive elections, capturing only 100-120 seats in the 388-member House of Commons.  Former Prime Minister Stephen Harper decamped to corporate boardrooms after losing the 2015 election.  Subsequent leaders Andrew Sheer and Erin O’Toole left few footprints and were shown the door after the party failed to make inroads in urban Canada.

A feisty hard-c conservative, MP Pierre Poilievre, is frontrunner to become the Conservatives’ new leader, and to move his party to the right.  Poillievre received a hero’s welcome at a Conservative event during the Calgary Stampede earlier this month. A moderate rival, ex-Quebec Premier Jean Charest, was booed. The Calgary-born Poilievre was part of Canada’s insurgent Reform Party in the 1990s, which later took over the existing Progressive Conservative Party. Poilievre favors elimination of the Trudeau government’s carbon tax, and he would defund the Canadian Broadcasting Corp. He has sharply criticized federal vaccine mandates and vows to make Canada “the freest country on earth.”

Angry Canadians may feel better watching Poilievre take on Trudeau. Poilievre made a show of marching with right-wing convoy protest leader James Topp in a recent Canada Day protest.  A former Liberal strategist but Trudeau antagonist, Warren Kinsella, wrote this month:  “The Conservative Party of Canada has effectively been taken over by the convoy types.”

Canada has loud talk radio hosts but lacks the vast resentment machine that is right-wing media in “the States.”  The country is progressive on social issues, and has been since PM Pierre Elliott Trudeau (Justin’s father) proclaimed in 1968 that the state has no place in bedrooms of the nation.  The ruling Liberals are tightening gun-safety legislation, to widespread public support.  Climate change is a concern that spans party lines in the Great White North.

Nonetheless, the language of politics is becoming harsher.  Public officials are targeted for abuse. Confrontations are getting more frequent and intense.  And divisions are growing deeper, on both sides of the U.S.-Canada border.  Ugly trends in the United States usually have a way of moving north. It’s the distemper of our times.