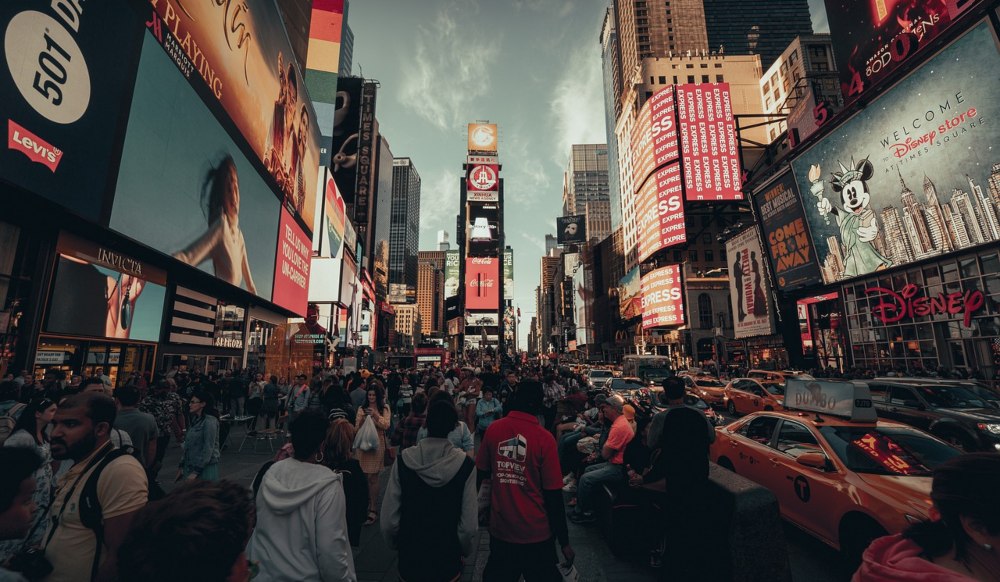 Back in the Big Apple: My Post-Pandemic Culture Crawl

My son dropped me off at the airport for my first trip to New York since before the pandemic – actually, my first trip anywhere in two years. Unsure of my stamina, I’d arranged for a wheelchair to transport me to the gate, and I had my cane, which I call my old lady card in a blatant attempt to garner “old lady cred.” When my son reminded me that it’s no longer just a card – “You are an old lady,” he said – I hit him with it.

The ticket to NY was a gift for my 80th birthday, just when COVID closed it down.  It only took the bumpy, sweaty, overcrowded A train ride into the city to reassure me that the more everything changes, the more it stays the same. Some familiar places are gone, especially small retail businesses and restaurants on the upper west side, but there weren’t many vacant storefronts, either, and there was a new Banksy on the wall of the old Loehman’s across from Zabar’s on 79th street.

There are plenty of new buildings, including  the Vessel at Hudson Yards, a $200M structure closed to the public after a spate of suicides from its 150 feet ascended by the 154 interlocking stairs of this truly ugly testament to wealth and vanity by the Related Company, the developer of the Yards.

Still, it’s a good entry point to the Hi-Line, which is lush with greenery and thick with tourists this summer but surprisingly devoid of art, which was plentiful, at least on the southern section of the elevated track, the last time I was there. But there was fascinating and provocative art at the Whitney Biennial when we descended the track at 15th Street, after a morning at the Modern where Matisse’s Red Studio was engaging the crowd of visitors.

I also caught the American fashion on display at the Met Costume Gallery, delighted to see that a vintage Bill Blass suit which is a twin to the one I wore to the inauguration of JFK. I also had a new look at the old paintings from the Frick which have been beautifully rehung at the Breuer building on Madison while the Frick undergoes a badly needed renovation.

On a gorgeous summer night I listened to Brazilian music under the stars at the Damrosch Pavilion in Lincoln Center and another evening I tapped my feet to a blissful set of Benny Green’s great bebop piano at a club in the west village. But mostly I go to New York to gorge on theater and on this trip I saw six shows in 12 days – between TDF, Today’s Tiks and Theatermania, they totaled less than $350.

Paradise Square, whose fabulous star won the Tony last month, is a stunning musical about the draft riots in New York in 1853. Not exactly Hamilton, but with choreography by Bill T Jones to Afro-Irish music and the best dancers anywhere,  as well as a stunning and eminently hummable anthem, ‘Let it Burn,’ it should have enjoyed a longer run than it’s getting, and is probably too expensive to tour, according to Burke Walker, who led the Empty Space Theater in Seattle back in the day and reminded me over brunch that the Space will celebrate its 3Oth anniversary with a big party here on July 30. (Check the Space’s web site for details and expect to see some old familiar faces, including Burke’s).

POTUS is a hysterical farce about the women who work for the president. It won raves for Julie White and Rachel Dragg but the biggest applause came for a member of the audience who stood up to cheers when POTUS ‘s chief of staff asked his wife why she wasn’t the president and Hillary Clinton clapped and laughed uproariously along with everyone else.

Queen is a resonant and prescient play about two women who’ve been researching the reasons for collapse of bee colonies (Monsanto, they presume) and are about to publish their data in a prestigious journal when a data sample added in at the penultimate moment renders their research insignificant. While their mentor urges them to ignore it and threatens to fudge the science himself, only one of the women agrees, while the other threatens to expose the lie. The tension is palpable and the actors make the most of it; the denouement is thrilling and unexpected.

Tracy Letts stars in The Minutes, his well-wrought play about a city council meeting that erupts in spectacular fashion. A revival of Company with Patti Lupone deserves the Tony’s it got, but Corsicana, a play by Will Arbrey, a finalist for the Pulitzer for his last outing in 2019, disappoints, despite Sam Gold’s direction. Five hits and one miss didn’t dim my happiness at being back even in cheap seats for the best theater in the world (possibly excepting London).

In between music, museums and theater, there were the smaller pleasures of New York after too long an absence. I was delighted by it all – the sunsets over the Hudson, the fireworks on the east river and in Central Park, the lobster rolls and soft shell crab, the always amazing variety of  people, languages, clothes and street culture, the energy, and even the pop-up marijuana stores that are everywhere.

In a state that just legalized weed but hasn’t yet set up a licensing infrastructure, I saw chocolate psilocybin bars legal in Canada but nowhere in this country, prominently displayed in a storefront on Columbus Avenue (yes, reader, of course I brought one home, and at $60, it was the most expensive thing I purchased including the theater tickets and lobster). Seeing old friends, making a couple of new ones, walking the streets of the city more slowly than I used to, but still reveling in its many pleasures even in 85-degree sunshine, was how I spent my first post pandemic summer vacation.

Jane Adams
"Jane Adams PhD was a founding editor of the Seattle Weekly. Among her twelve books is Seattle Green, a novel . She is a contributing editor at Psychology Today, and coaches parents of adult children."
Previous article
A Long Hike: Congress Adds More Wilderness Area to the Olympic Peninsula
Next article
Rise of the Anti-Feminism Backlash