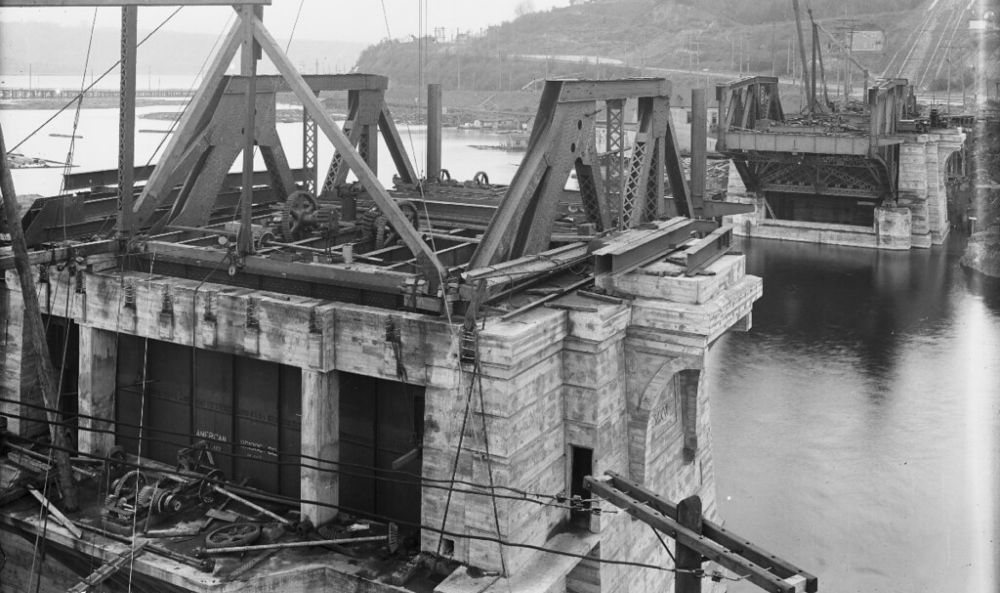 Ups and Downs: How the Fremont Bridge Came to Be

Seattle’s funky and iconic Fremont Bridge, now 105 years old, was part of the ambitious construction of the Lake Washington Ship Canal project – a first in the American West – and the development of Seattle’s North End. These ambitious projects rose from the talents and determination of a blend of newcomers. Allow me to introduce them.

The Fremont neighborhood – and its nearby bridge – received its moniker from the community’s founders, L.H. Griffith and E. Blewett, who wanted to honor their hometown of Fremont, Nebraska, a village overlooking the Platte River and on the main route of the Oregon Trail.  In turn, the Nebraska town was named for “The Pathfinder,” John Charles Fremont, a flamboyant Western American explorer and politician.  The bridge boasted a rare “double-leaf pony truss bascule,” a 317-foot span connecting downtown Seattle to burgeoning neighborhoods north of Queen Anne Hill.  (In Oregon another bridge bears the Fremont name, along with a highway, a lake, and a national forest.)

A galaxy of independent-minded, talented individuals contributed to Seattle’s Fremont neighborhood.  The first industries on the north shore of the little stream gurgling by tiny Fremont were shingle mills and an iron foundry.  Dr. E.C. Kilbourne (1856-1958), one of Seattle’s first dentists, joined Griffith and Blewett to plan and expand the new community.  In 1888 the founders hired Chinese labor to deepen the stream meandering between Salmon Bay, a traditional Duwamish settlement, and “Tenas Chuck” (Lake Union).

In 1852, Ira Wilcox filed the first homestead claim on land that would grow into Ballard, a workers’ neighborhood that became Seattle’s Scandinavian district.  More rumblings of activity along this watery crease attracted railroads, including the Great Northern Railroad and a smaller player, the Seattle, Lake Shore and Eastern Railroad.

The ship canal spent many years in its birth canal. On July 4, 1854, at a civic Independence Day celebration, Thomas Mercer (1813-1898) touted the advantages of a potentially navigable passage between Lake Washington and Puget Sound.  In the 1860s, Harvey L. Pike, son of John H. Pike (namesake for Seattle’s busy Pike Street), and Judge Thomas Burke (1849-1925) undertook efforts to send logs through a narrow opening at the 1,200-foot-long Montlake Cut.  In 1867, the U.S. Navy signaled its interest in linking Puget Sound with Lake Washington, but no further steps were taken. In 1906, developer James A. Moore (1861-1929) was ready to invest in a cross-city canal, but ran out of funds.

The ship canal had a rival. Washington State Territorial Governor Eugene Semple (1840-1908) sought a “cut” through the hills from sweet to salt water.  In 1895, Semple began digging a canal through Seattle’s formidable Beacon Hill, hoping to link the Duwamish tide flats to Lake Washington, but never completing the route.

Coal, timber, and truck farm goods were being shipped to Seattle from Bellevue, Medina, Renton, Newcastle, and other eastside districts.  Semple wanted to shorten the path of goods with a large canal.  His bill passed the Washington State Legislature, but was stymied when major Seattle players (Arthur Denny, Judge  Burke, John J. McGilvra, and others) preferred the Shilshole Bay-Fremont route.  These established figures had the last word.

Enter Scotsman Guy Carleton Phinney (1852-1893), who arrived in Seattle in 1881 after making a fortune in Nova Scotia real estate.  He bought 200 acres next to Green Lake and erected an English-style manor house in the middle of his spread.  Phinney invested in a menagerie – precursor to the Woodland Park Zoo – and invited Seattleites to visit his realm on top of the hill.

To encourage visitors and prospective home and lot buyers, Phinney built a trolley from central Fremont – a short walk from the northern end of the Fremont Bridge – to his homesite.  Phinney’s quaint trolley was locally known as the “White Elephant.” His eccentric character laid down unusual rules of behavior for park visitors.  Dogs would be shot on sight; no firearms; no picking flowers or cutting trees; drinking fountains must be turned off after use; horse-drawn buggies were only allowed on designated roadways; molesting of animals was prohibited; profane or vulgar language was not allowed; no gambling.

When Phinney died unexpectedly in 1893 at age 42, his wife Nellie Phinney struggled with the project, finally selling most of the property – site of Seattle’s future Woodland Park – to the City of Seattle for $100,000.  Guy Phinney never saw Fremont’s rapid development or dedication of the Fremont Bridge, but his early civic interests and activities helped build a community foundation and included plans for the Lake Washington Ship Canal.

Following his graduation from the Military Academy at West Point in 1884, New Yorker Hiram Martin Chittenden  (1858-1917) undertook tours of duty as an officer in the Corps of Engineers, assigned to Yellowstone Park.  The West became his passion and Chittenden wrote several books on the West.

Chittenden as commander of the U.S. Army Corps of Engineers in Seattle tried to encourage both the local community and federal officers about the importance of a Lake Washington Ship Canal.  He played a key role getting Congress to appropriate $2,275,000 for boat locks in the muddy waterway.

In 1916, the Montlake Cut was safely opened, allowing Lake Washington waters to cascade into Lake Union, lowering the larger by nine feet.  In 1917, Admiral Robert D. Peary’s flagship, USS Roosevelt, led a flotilla eastward through the “ditch.”  After his death on October 9, 1917, the Corps of Engineers re-named the Government Locks in
Chittenden’s memory.

Fremont and nearby north Seattle communities, led by local railroads, erected rickety trestles over Seattle waterways in the late 1890s to serve the Fremont Mill Company and other businesses.  After the Ship Canal opened, the era of bascule bridges commenced.  Such bridges achieved balance like a teeter-totter, one end counterbalanced by the other.

Engineer Frank A. Rapp (1876-1923), designer of the Fremont Bridge, arrived in Seattle in 1912 after designing bridges for the railroad. Three years into his new job he apparently got sideways with his boss, A.J. Goddard.  The sale of bonds to pay for the Fremont Bridge had been stalled because of Rapp’s work, wrote Goddard, but Rapp held onto his job and in 1917, the Fremont Bridge opened at a cost of $410,000. With a clearance of only 30 feet, today’s Fremont Bridge opens an average of 35 times a day, earning it the claim as “The Busiest Drawbridge on the Planet Earth.”

Six years later, Rapp took his life with a pistol at his home in West Seattle, after being confined to his bed for several months with a serious illness.  The Rapp obituary noted that he had designed “nearly all Seattle’s important bridges,” and was considered a “highly skilled bridge engineer.”

In 1982, the Fremont Bridge was posted to the National Register of Historic Places.

Another landmark, sculptor Rich Beyer’s most famous work, “People Waiting for the Interurban,” stands under a pergola on a triangle at the north end of the Fremont Bridge.  The five aluminum adults and one dog (with a human face) look over Fremont’s commercial center.

Fremont residents claim the cluster represents the changing fortunes of Fremont.  The original milltown, once isolated from the Big City, hosted worker’s clapboard homes, noisy railroad traffic, small businesses and population on the move.  Today, Fremont is a thriving community of artists, writers, and retirees.

Junius Rochester
Junius Rochester, whose family has shaped the city for many generations, is an award-winning Northwest historian and author of numerous books about Seattle and other places.
Previous article
What Italy Learned: Lessons from a Time of Senseless Violence
Next article
The Most Interesting Governor’s Race in the Country This Year?