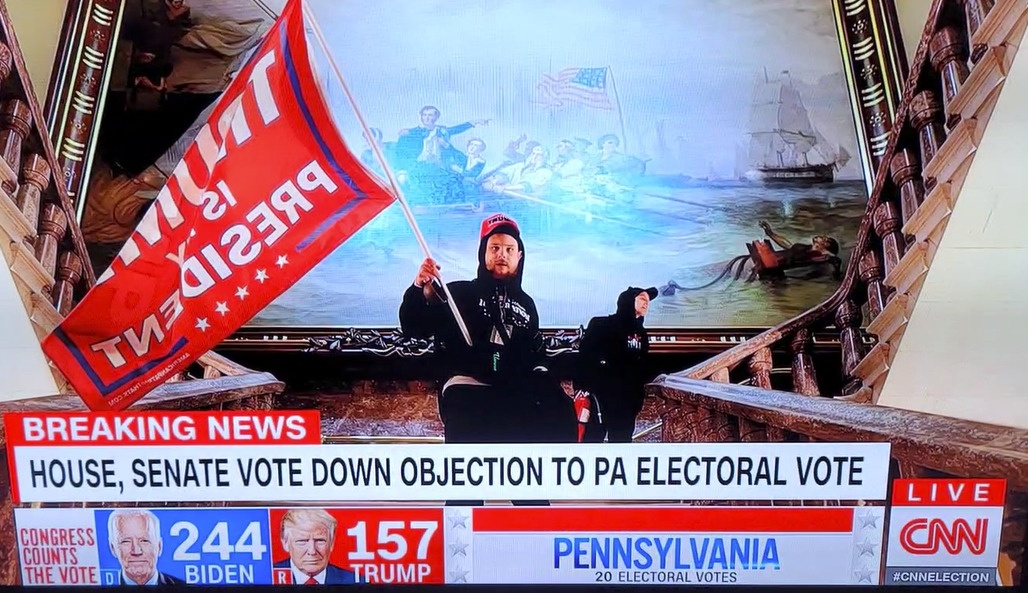 Sen.-elect Ralph Warnock knew he “had arrived” as network morning shows clamored to give him airtime after the January 5, 2021, special election which elected Georgia’s first U.S. Senator who is African American, and Jon Ossoff, its first Jewish Senator, and flipped Congress’ upper chamber to tenuous Democratic control.

The upbeat interviewing ended with Whoopi Goldberg on “The View.”  But the news cycle turned to national trauma that afternoon, as a mob inspired by President Trump stormed and trashed the U.S. Capitol in a bid to halt the counting of electoral votes and formal certification of Joe Biden’s election.  A Confederate flag was carried through National Statuary Hall and cries of “Hang Pence” rang through the corridors of power.

“Are we a January 5th country or a January 6th community?” asks Warnock, a minister who continues as senior pastor at Atlanta’s Ebenezer Baptist Church.  The answer is part both, with better angels and darker impulses competing for the national psyche.  “That is who we are,” says the senator-pastor.

Warnock has twice scheduled Seattle fundraisers but scrubbed both appearances due to Senate business.  He spent an hour on Zoom with Seattle supporters on the eve of Georgia’s primary this Tuesday.   He is up for election to a full term this November and tops the “core four” list of targeted Democrats in the battle to control the U.S. Senate.

Seeing a Senator who is the parson of Dr. King’s old church is a small kindling of hope as this country struggles to measure up to its ideals. Warnock is running nonstop, but with pauses to consider where he has made a difference. He and seatmate Sen. Ossoff were key to the 52-48 Senate vote to confirm appellate judge Ketanji Brown Jackson as the first African American woman who will serve on the U.S. Supreme Court.  “If we had not won, she would not be sitting there in that we would not have had that majority,” he said.

On a 50-50 vote, with Vice President Kamala Harris breaking the tie, the Senate passed the American Rescue Act, a key provision being temporary expansion of the Child Tax Credit. “We gave a tax cut to hard-working families who feel the difference,” said Warnock. Alas, thanks to unified Republican opposition – and Democratic Sens. Manchin and Sinema – “We didn’t have the votes to extend it.”

Warnock is the 11th of 12 children.  He grew up in public housing dreaming of going to Dr. King’s alma mater.  “My folks couldn’t afford to send me to Morehouse.” He made it, however, thanks to a Pell Grant and student loans. He went on to graduate before doctoral studies at Union Theological Seminary, and a vocation that began as youth pastor at Harlem’s Abyssinian Baptist Church.

He has leaned on President Biden to forgive mounting student debt, on which Biden is reportedly about to act to the tune of $30,000. “It is getting harder for a kid to do what I did,” Warnock reflected. “States are investing less and less in public colleges. Student debt has surpassed credit card debt . . . Students have a mortgage before they get a mortgage.” A $30,000 break would “dramatically narrow the wealth gap,” added Warnock, easing the path to buying a home or starting a business.  “Student debt is something the President could accomplish right away.”

Working on the specifics isn’t easy in today’s America, or in a Georgia that is on the nation’s political minds.  The Peachtree state is, in Warnock’s words, “split straight down the middle.” Trump has anointed onetime Heisman Trophy winner Herschel Walker, a recent transplant from Texas, as Warnock’s Republican opponent.  Walker is African American, but a critic of “this racism thing” and tells audiences that “the Bible does not talk about Black and White, just believers and nonbelievers.”

Without using Walker’s name, Warnock referred to an opponent as a “deeply flawed individual.” Walker has faced accusations of domestic violence and a history of mental illness.  Nonetheless, the Republican Party’s leaders have embraced Trump’s choice of a Senate candidate much as they have acquiesced to his other actions.  In Warnock’s words, “They’re willing to go along with what Trump has done to this country if it serves their short- term purposes.”

The Republicans used personal attacks against Warnock in 2020 and labeled him a “radical liberal.” They’ve switched tactics this year, acknowledging his charisma.  “His personal story? It’s inspirational,” says the narrator in a National Republican Senatorial Committee TV spot.  Instead, Warnock is depicted as a rubber stamp for President Biden, a far more convenient devil figure.

An Atlanta TV station poll, completed in late April, showed Warnock with a 50-45 percent lead over Walker.  “We’ve got to hold the line in Georgia,” he said.  The Warnock campaign had a whopping $25.6 million in the bank after first quarter campaign finance reports came in last month.

I paid my way into the Warnock fundraiser and hope he wins reelection.  If Tucker Carlson can give $250 to QAnon’s Rep. Marjorie Taylor Greene, this retiree will damned well contribute a like amount to a better angel in the Georgia delegation. Besides, it’s worth it to peer into the post-Citizens United world of fundraising without limits. I’m tempted to give again if Alaska’s Lisa Murkowski, a Senate adult and anti-Trump Republican, hits town.

What we saw on our screens was a good guy, who has campaigned for Medicaid and preached against Georgia legislators’ bills to permit gun owners to pack heat when they go to church.  Moreover, Warnock has a feel for legacy, sense of what kind of country we want to deliver to our offspring.

Warnock was at the well of the Senate during the vote on Judge Jackson, chatting with Vice President Kamala Harris.  At her suggestion, he took a piece of the Veep’s stationary and wrote a note to five-year-old daughter Cloe.  The Senate was about to confirm “the first Supreme Court justice in America who looks like you, has hair like you.”

“We ought to think of the legislation we pass as a letter to our children,” said Sen. Warnock.

Joel Connelly
I worked for Seattle Post-Intelligencer from 1973 until it ceased print publication in 2009, and SeattlePI.com from 2009 to 6/30/2020. During that time, I wrote about 9 presidential races, 11 Canadian and British Columbia elections‎, four doomed WPPSS nuclear plants, six Washington wilderness battles, creation of two national Monuments (Hanford Reach and San Juan Islands), a 104 million acre Alaska Lands Act, plus the Columbia Gorge National Scenic Area.
Previous article
A Glimmer of Hope for Passing Gun Legislation: A Quiet Breakfast Deal
Next article
Idaho-Envy: Inside the Eastern Oregon Movement Yearning to Secede