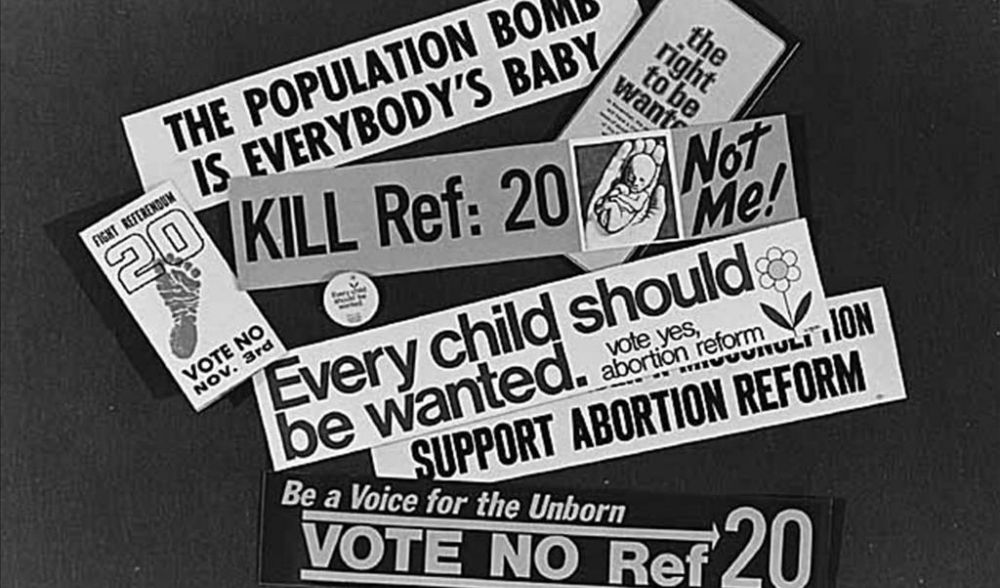 How Abortion Rights Became Central to the Culture Wars

The language of Washington state’s 1970 election campaign over whether to legalize (and limit) abortion repeats consistent themes heard for more than half-a-century in a debate that continues to divide America. Alas, the country’s political parties have crossed to opposite extremes, even as polls show a conflicted public.

“KILL REFERENDUM 20, NOT ME,” proclaimed the anti-abortion campaign’s slogan, displayed on billboards across the state. The Catholic Church carried that message from church pulpits to the public square.

“Every child should be wanted,” countered a line used in pro-choice literature, citing case after case of desperate pregnant women unable to afford trips to Japan or services of a discreet downtown clinic near Frederick & Nelson.  Back-alley abortions moved out front as an issue, with Washington becoming the first state to legalize abortion by popular vote.

Lines have not changed, but lineups have. Republicans were leaders in the 1970 drive to legalize abortion. State Sen. (and future Congressman) Joel Pritchard was a chief sponsor, aided by such colleagues as Sens. Fran Holman and Charlie Elicker. Gov. Dan Evans was a supporter, and wife Nancy Evans was a founding board member of Planned Parenthood of Thurston County.

Our pro-choice Republicans had company, particularly in the West. Sen. Bob Packwood, R-Oregon, was a pre-Roe v. Wade supporter of legalizing abortion. California Gov. Ronald Reagan signed into law the 1967 Therapeutic Abortion Act, which liberalized laws to allow abortion in cases of rape and incest, and when a woman’s physical or mental health was in jeopardy. Arizona Sen. Barry Goldwater, father of modern conservatism, joined his wife in birthing a Planned Parenthood chapter in Phoenix, backed birth control, and argued that abortion should be the decision by a woman and her doctor.

Former GOP first lady Betty Ford was a headliner at the 1977 National Women’s Conference in Houston, called to build support for abortion rights and to rescue the ERA. Across town at the Astrodome, however, conservative activist Phyllis Schlafly drew 15,000 people to an anti-feminist counter-conference.

It was a harbinger of events and wars to come. With Reagan’s nomination in 1980, the Republican Party tacked hard right on the abortion issue. High-profile conversions were an order of the day. As a Texas congressman, Vice Presidential nominee George H.W. Bush had been nicknamed “Rubbers” by colleagues since he was a zealous champion of birth control. The senior Bush then became a supporter of the GOP platform, as did Reagan, who voiced public regret at signing the 1967 law.

The National Republican Coalition for Life, headed by anti-ERA campaigner Phyllis Schlafly, came down on any Republican leader (e.g. Bob Dole) who sought to soften anti-abortion language. Supporters of the right of choice, such as Barbara Bush, kept their feelings private.

Sen. Joseph Biden of Delaware, a Democrat and a Catholic, took a different direction in his long political journey. Biden once supported restrictions on abortion (e.g. the Hyde Amendment) and backed a proposal to let states decide whether to legalize abortion.

“The people who are for abortion have already been born,” was one of Ronald Reagan’s favorite lines. He paid lip service to the anti-abortion movement, sending out a support statement to the annual March for Life, which takes place annually on the anniversary of the Supreme Court’s 1973 Roe v. Wade decision.

Backstage, more fundamental coalition-building was going on, starting with the Moral Majority movement of Rev. Jerry Falwell. Its ambition was to expand the Republicans’ political base by activating evangelical and social conservative voters.  “Traditional Republican business groups can provide the resources, but these groups can provide the votes,” Grover Norquist of Americans for Tax Reform explained.

In exchange for those votes, the anti-abortion movement wanted judges. It proved willing to airbrush past pro-choice statements and multiple lifestyle transgressions of Donald Trump, gaining as a reward three Supreme Court appointments.  Instead of amending the Constitution – an impossible goal — the movement set out to gradually impose restrictions which a more conservative Supreme Court would uphold.

In the last few years, Republican-run legislatures have made abortion illegal after 20 weeks, and then 15 weeks (Mississippi), then six weeks (Texas and Oklahoma), with 13 states enacting “triggering” clauses making abortion illegal altogether if the Supremes overrule Roe.

Washington has gone the other way, with a 1991 statewide vote that strengthened protection of abortion rights, and legislation requiring that contraceptive services be part of health care plans. The state has sued druggists for refusing to supply “morning after” pills.  As well, the religious right has suffered a succession of ballot box defeats on civil unions, same sex marriage, and sex education in schools.

Meantime, the ranks of pro-choice Republicans in Congress have sharply dwindled.  Sens. Dan Evans, Slade Gorton, and Rep. Jennifer Dunn were among them, although not sympathetic to late-term abortions. Now, Reps. Cathy McMorris Rodgers and Jaime Herrera Beutler, R-Wash., are outspoken abortion foes.  Reacting to Justice Samuel Alito’s draft anti-Roe opinion, McMorris Rodgers tweeted: “We must protect life from Democrats’ extreme abortion agenda and affirm that Chloe, Cole, and Valentina’s (her children) lives are worth living.”

If the Court’s final decision mirrors Alito’s draft, Collins said Tuesday, “it would be completely inconsistent with what Justice Gorsuch and Justice Kavanaugh said in their hearings and in our meetings in my office.” Murkowski said the prospect of such a decision “rocks my confidence in the court right now.”

It’s not your fathers’ and mothers’ Republican Party anymore. Our state’s “new look” Republicans of yesteryear are old or deceased.  The moderates were displaced by Goldwater/Reagan conservatives, who in turn have been supplanted by culture warriors.

Joel Connelly
I worked for Seattle Post-Intelligencer from 1973 until it ceased print publication in 2009, and SeattlePI.com from 2009 to 6/30/2020. During that time, I wrote about 9 presidential races, 11 Canadian and British Columbia elections‎, four doomed WPPSS nuclear plants, six Washington wilderness battles, creation of two national Monuments (Hanford Reach and San Juan Islands), a 104 million acre Alaska Lands Act, plus the Columbia Gorge National Scenic Area.
Previous article
Polarized Frenzy: Is There Room for the Moderate?
Next article
Boeing: Move to DC is all About Our Values