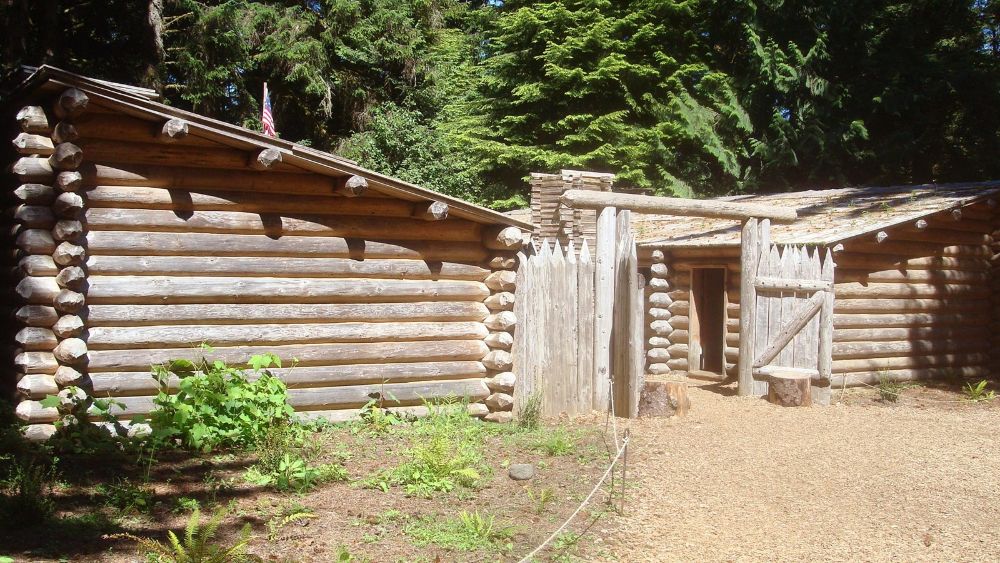 Webster’s defines the word “fort” as “a strong and fortified place.” There are many such places in the Pacific Northwest, both to guard settlers from attack and to fend off possible Pacific incursions. Lewis and Clark may have considered “Fort Rock Camp” near the Columbia River at the mouth of Mill Creek near The Dalles, Oregon, to be a protective bastion. Today the site reveals a pile of broken basalt stones lying randomly in a semi-circle.

There is also the famous Fort Clatsop, Lewis and Clark’s second winter home, south of today’s Astoria, Oregon, where they spent November 1805 to March 1806. Today, the fort has been reconstructed.

An earlier fort was located at Neah Bay, Washington, the far Northwest corner of the Olympic Peninsula.  In 1792 the Spanish built a “fort” at this site – the first building erected by Euro-Americans in our region – and they called it Bahia de Nunez Gaona.  This tiny settlement was named after Alonso Nunez de Haro y Peralta, a distinguished Spanish prelate and Archbishop of Mexico.

Later, American traders called it “Poverty Cove,” and in 1841 Lt. Charles Wilkes named it “Scarborough Harbor” for Captain James Scarborough of the Hudson’s Bay Company.  Its current moniker, Neah Bay, employs the name of the whale-hunting people who have occupied the site for at least 4,000 years.

Were “Fort Rock” and Nunez Gaona true forts?  It is believed that neither of them was built to ward off attacks.  More likely, each was a waystation, a temporary settlement and a source of food, water, and information.  Fort Clatsop, on the other hand, may lay claim to being a true “fortified place,” with its stockade and round-the-clock military presence.

These obscure historical sites are interesting sidebars in our regional history. Most of them served as trading centers and integral parts of the great fur trade. In later years the Pacific Northwest became one of the nation’s preeminent military sites, from the Canadian border and eastern posts (Fort Nez Perce, Fort Okanogan, and Spokane House), through the Yakima hills (a military training reserve), Puget Sound (Fort Lewis and McChord Air Force Base), in the Walla Walla Valley (three sites, each named “Fort Walla Walla” at different periods), to Fort Vancouver on the north bank of the Columbia River, also reconstructed.

Fort Vancouver was a complete fur trade/military compound.  Originally constructed by the Hudson’s Bay Company, it assumed its role as a pre-eminent site when Americans took control of Fort Astoria at the Columbia River mouth.  Its agricultural, livestock-raising, fishing, fruit-growing, and cultural influences were felt throughout the Pacific Northwest.  Dr. John McLoughlin, the Chief Factor or administrator, dominated the Fort Vancouver site  for more than 20 years and was known as the White-headed Eagle for his shock of white hair.

The Fort Vancouver community consisted of 500 residents, workshops, storerooms, a bakery, a flour mill, Protestant and Catholic churches, and over 20 miles of riverfront and docking facilities.  Fort Vancouver assumed the role of an unofficial government for all non-Native groups in the region and was the leading social center in the Pacific Northwest until 1843, when the United States assumed control of the Oregon Territory, up to the 49th parallel.

Junius Rochester
Junius Rochester, whose family has shaped the city for many generations, is an award-winning Northwest historian and author of numerous books about Seattle and other places.
Previous article
Wake-up Call: Supreme Court Shows Its Hand
Next article
Post Alley Writers: a Roundtable on the Supreme Court’s Roe Bombshell