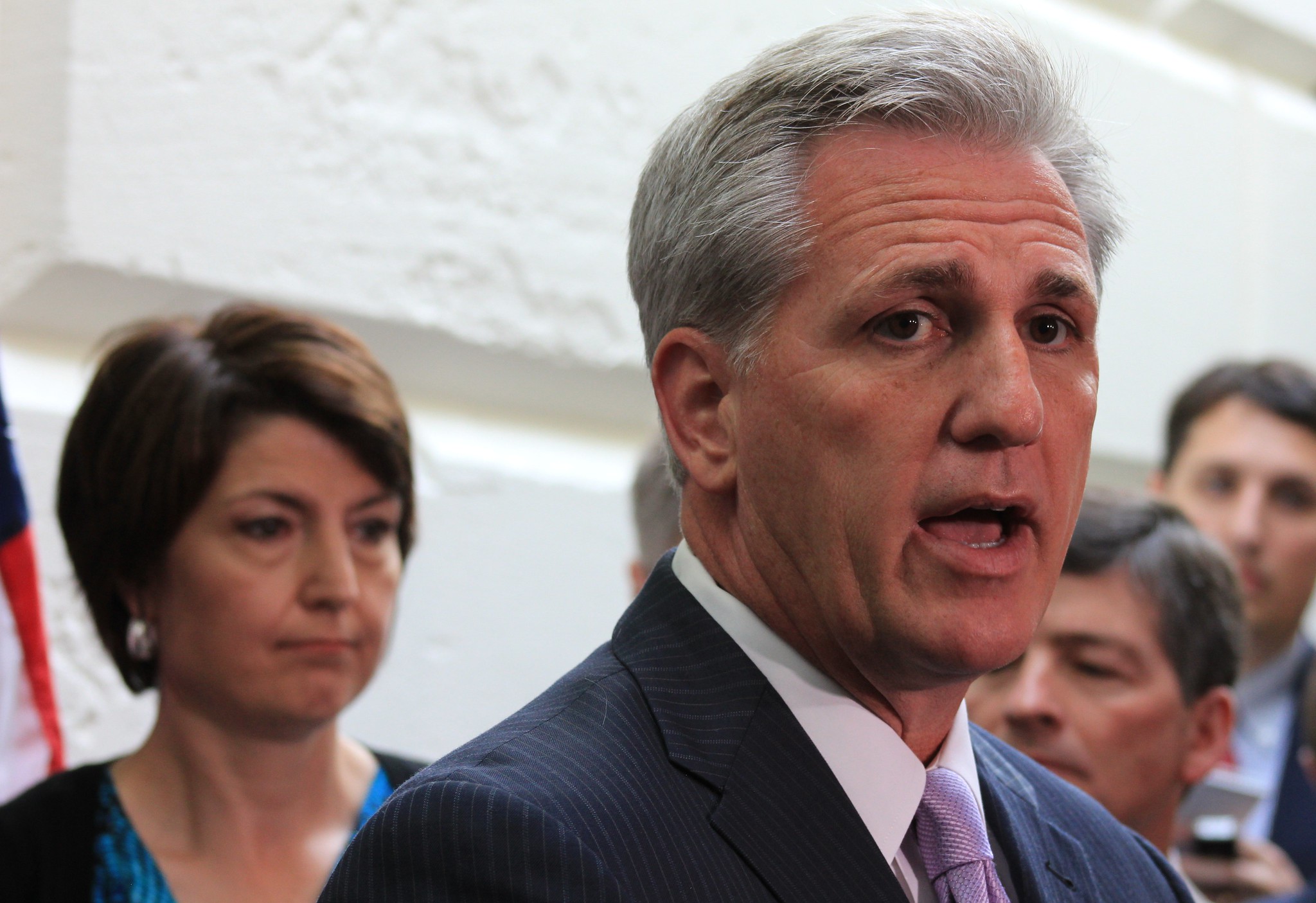 McCarthy: (Oops, the Tapes) — We Now Return to our Regularly-Scheduled Trumpophilia

Republican leadership on Capitol Hill put in blind trust their scathing private views of Donald Trump and reaped rich benefits during the reign of President Trump. A sweeping tax cut rewarded the rich, three conservative Supreme Court justices were nominated and confirmed, environment and workplace regulations were rolled back.

It turned out there is nothing like a violent mob displaying nooses and chanting “Hang Mike Pence” to focus leaders’ minds — but only briefly. The just-published book This Will Not Pass: Trump, Biden and the Battle for America’s Future has milked recordings from January 6 and its aftermath to put their temporarily-panicky thoughts on the record.

The result is turmoil in a party favored to rule Congress after the 2022 mid-term elections. House Republican Leader Kevin McCarthy denied the book’s quotes as “totally false and wrong,” only to be embarrassed when he was heard saying to GOP leaders on taped recordings that he told Trump: “I think this [impeachment] will pass, and it would be my recommendation you resign.”

McCarthy lied about the quotes and got caught when they were released by the book’s authors. Similarly, Senate Republican Leader Mitch McConnell was heard to say, of Trump’s January 6 behavior, “If this isn’t impeachable, I don’t know what is,” and of the President whose agenda he pushed: “I’ve had it with this guy.”

Not quite. McConnell voted against convicting Trump when impeachment went to the Senate. Days after his private remarks were made public, Fox News asked McConnell if he would vote for Trump should he become Republicans’ 2024 presidential nominee. “Absolutely!” McConnell replied.  Similar assurance came from ex-Attorney General Bill Barr, whose bestseller details how Trump became unhinged in his catastrophic final year in office.

McCarthy, on the tapes, appeared briefly concerned for the Republic, saying:  “This country is too crazy. I do not want to look back and think we caused something or we missed something and someone got hurt. I don’t want to play politics with any of that.” Moi? Play politics??

The Republican establishment did indeed quickly “play politics,” beating a retreat worthy of Saddam Hussein’s Republican Guard.  McCarthy made a penitential pilgrimage to Mar a Lago within weeks of the insurrection. The reason for the reversal was summed up at a leaders’ meeting by Rep. Bill Johnson, R-Ohio: “I’m just telling you that’s the kind of thing we’re dealing with, with our base.”

The base. Of his blind followers, Trump once said, “I could stand in the middle of Fifth Avenue and shoot somebody, and I wouldn’t lose my voters, O.K.?” He has urged GOP primary voters to take down any Republican who voted to impeach him and anyone who questions his false claim that the 2020 election was “stolen.”

Trump has given a pass to recordings from now-subservient Republican leaders, leaving their punishment to his camp followers.  On cue, with Wednesday’s release of a new set of tapes of McCarthy and his deputies, Rep. Matt Gaetz, R-Florida, stated: “This is the behavior of weak men, not leaders. While I was protecting President Trump, they were protecting Liz Cheney from criticism. On the bright side, you no longer have to be a lobbyist with a $5,000 check to know what McCarthy and (Rep. Steve) Scalise really think.”

The base also takes its cues from Fox News, where Tucker Carlson described McCarthy as “a puppet of the Democrats . . . a man who, in private, turns out sound bites like an MSNBC contributor.” On the chyron, behind Carlson’s monologue, was a message in capital letters: “KEVIN MCCARTHY HATES PEOPLE LIKE YOU AND THIS SHOW.”

The Donald has gone off the rails on some of these endorsements. Trump withdrew his endorsement of faltering Rep. Mo Brooks in Alabama, using as excuse Brooks’ impertinent suggestion of looking ahead to 2024 rather than back at 2020. A Trump-backed Pennsylvania Senate candidate, Sean Parnell, withdrew when facing charges of spousal abuse.

Summertime for Trump will include primary tests in Washington state for Loren Culp and Joe Kent, who are running with Trump’s endorsement against GOP U.S. Reps. Dan Newhouse and Jaime Herrera Beutler, two of the 10 House Republicans who voted to impeach Trump after the January 6 insurrection.  Trump is also backing Sarah Palin in her special election bid running for Alaska’s U.S. House seat.

Trump’s sway over the Republican Party can be seen in the 203 House Republicans who voted against impeaching him. Republicans in Congress blocked creation of a 9/11 style independent commission to investigate 1/6. Meanwhile, McCarthy needs votes of pro-Trump crazies like Gaetz and Marjorie Taylor Greene in his quest to become House Speaker. He has purged Liz Cheney from leadership and is endorsing her GOP primary challenger in Wyoming. McCarthy has also backed the extremists’ refusal to testify before the House select committee probing the insurrection.

The tapes are showing collusion in efforts to overturn the election. Rep. Jim Jordan, R-Ohio, told White House Chief of Staff Mark Meadows: “Vice President Mike Pence, as president of the Senate, should call out electoral votes that he believes are unconstitutional as no electoral votes at all.” (Jordan would chair the House Judiciary Committee if Republicans win control this November.)

Going into the mid-terms, polls show a motivated Republican “base,” three quarters of whom believe Joe Biden was not legitimately elected.  By contrast, the Democrats’ base appears far less enthusiastic than in 2018 and 2020. Our state Democratic Party leadership is concerned the troops aren’t turning out.

They need motivation. J. Michael Luttig, a retired federal appellate judge and Bush appointee, was called upon to advise VP Pence and his legal counsel, in dealing with Trump’s demand that Pence delay or block Congress’ certification of Biden’s election.  Pence was presiding January 6 when states reported their electoral votes and he refused to obstruct the ballot counting.

Luttig, a conservative legal scholar, is looking at the political landscape and sees a steal in the making. “At the moment, there is no other way to say it: This is the clearest and most present danger to our democracy,” Luttig recently told The New York Times. “Trump and his supporters in Congress are preparing now to lay the groundwork to overturn the election in 2024 were Trump, or his designee, to lose the vote for the presidency.”

Time to remember Benjamin Franklin’s answer on what form of government the Founders had agreed upon — “A Republic If You Can Keep It.”

Joel Connelly
I worked for Seattle Post-Intelligencer from 1973 until it ceased print publication in 2009, and SeattlePI.com from 2009 to 6/30/2020. During that time, I wrote about 9 presidential races, 11 Canadian and British Columbia elections‎, four doomed WPPSS nuclear plants, six Washington wilderness battles, creation of two national Monuments (Hanford Reach and San Juan Islands), a 104 million acre Alaska Lands Act, plus the Columbia Gorge National Scenic Area.
Previous article
The Big Gamble: COVID and Children
Next article
Why Pete Carroll Thinks he can Punch the NFL in the Nose