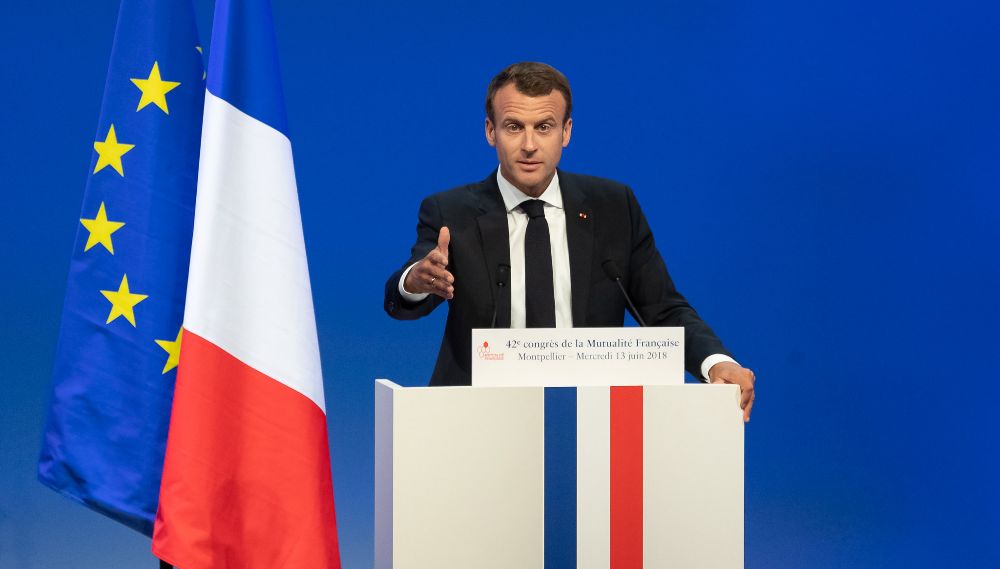 Russian President Vladimir Putin’s wanton aggression in Ukraine has united the fractious member states of NATO and the European Union in a way unimaginable only a few months ago.

Putin’s aggression is a stark reminder of the dangers of a long-scheming autocrat imperiling the security of his neighbors by violating international laws and practices enshrined in treaties that ended the last century’s world wars.

Macron’s victory over Le Pen, a force hostile to NATO and the EU, established the 44-year-old president as de facto European leader, successor to former German Chancellor Angela Merkel who chose not to seek a fifth term in the 2021 election after 16 years in office.

Macron’s rise to the fore of the 27-nation EU is more the result of a process of elimination than any coordinated strategy of the alliance or the voters of France.

Germany and France are the political and economic strongholds of the EU now that Britain has crashed out of the alliance and pursued a troubled go-it-alone course under Euro-skeptic Prime Minister Boris Johnson. A measure of the relief at Macron’s defeat of Le Pen was Johnson’s congratulation of Macron, deeming France “one of our closest and most important allies.”

Macron is the first French president to win a second term in two decades. Along with the surprise defeat of Slovenia’s right-wing Prime Minister Janez Jansa, the twin victories brought much-needed votes of confidence in democratic values of free and fair elections, independent media, and respect for human rights in a Western world mired in culture wars.

Olaf Scholz, conservative Merkel’s Social Democrat successor who took office late last year, was never going to replace her in the broader European leadership role. He governs in coalition with environmentalist Greens and pro-business Liberal Democrats whose clashing priorities constrain him from the bold action needed in a continent threatened by Putin’s reckless war.

France under Macron has taken the lead in Europe in lavishing arms and aid on embattled Ukraine to push back Putin’s effort to conquer his independent neighbor and install a Kremlin-friendly regime. With less public fanfare than U.S. efforts to aid Ukraine, Macron has led the European members of NATO in dispatching sophisticated munitions to the embattled country.

Macron’s decisive action appears to have influenced Scholz. The German chancellor relented this week on his earlier refusal to send powerful defense weapons to Kyiv in fear of spurring Putin to escalate his aggression. German Defense Minister Christine Lambrecht announced Tuesday that Germany will supply 50 Gepard self-propelled anti-aircraft guns and train Ukrainian forces on the use of long-range armored Howitzer 2000s supplied by the Netherlands. The policy change was disclosed ahead of Lambrecht’s meeting with representatives of 40 countries led by U.S. Defense Secretary Lloyd Austin in Ramstein, Germany, to coordinate Western aid to Ukraine.

Macron’s ability to maintain Europe’s fragile unity will be challenged by the scope of the continent’s collective needs and his own domestic woes. The French and European economies have yet to recover from pandemic shutdowns, inflicting inflation on populations even before the added burdens of energy supply disruptions in countries heavily dependent on Russian supplies of oil and gas. The rising cost of living in France is Macron’s greatest obstacle as his party and potential coalition partners face parliamentary elections in June.

Macron’s victory over Le Pen was less a vote of confidence in his policies and performance as fierce rejection of his opponent’s infatuation with Putin when Europeans are trembling over Kremlin aggressions.

Macron’s popularity in France teetered throughout his first five-year term. Widespread labor strife among disenchanted “yellow vest” laborers, his hugely unpopular efforts to raise the retirement age from 62 to 65, rising costs of living and Macron’s image as a president out of touch with his people saw his approval ratings tumble as the election approached.

A record-low 72% of French voters turned out Sunday and at least 5% of those who voted cast blank or defaced ballots in symbolic rejection of both candidates. The head of the Ipsos polling institute, Brice Teinturier, told France Inter radio that 90% of those polled said they voted for Macron primarily to keep Le Pen from winning.

Macron’s emergence as Merkel’s successor is embraced by other European leaders fearful of the rise of extremist politics and disrespect for the rule of law and internationally recognized borders.

“Targeting and killing innocent civilians. Redrawing borders by force. Subjugating the will of a free people. This goes against core principles enshrined in the U.N. Charter,” European Commission President Ursula von der Leyen lamented during a visit to India on Monday. “In Europe, we see Russia’s aggression as a direct threat to our security.”

Slovenian voters’ ouster of Jansa showed a turnabout by the former Yugoslav republic’s citizenry in rejecting the subjugation of peoples to Stalinist dictatorship and repression. Robert Golob, likely incoming prime minister, has promised to return the EU-member country of 2 million to the liberal democratic path on which it embarked after declaring independence from Yugoslavia in 1991.

“Macron’s victory in France may have restored some of our faith in the future of the free world at a time when we desperately need it,” Washington Post commentator Jason Rezaian writes. But believe me when I say: Slovenia is something to behold.”

EU member states Poland and Hungary have likewise strayed from the democratic path in recent years as leaders packed the judiciary with supportive judges and misused EU development funds.

In an opinion piece published by the New York Times two days after the election, Philippe Marliere, a professor of French and European politics at University College London, warned it was premature to celebrate Macron’s victory as a boost for democracy. He notes that the two former mainstream parties in France, Republicans and Socialists, have virtually collapsed as French voters defected to far left and far right extremes.

“That brew of volatile feelings is not going anywhere. In the coming years, as the country deals with the continued fallout from the pandemic, geopolitical crises, and price hikes, it may be given ample cause for expression. Mr. Macron won, yes. But France is still in trouble.” Maliere concluded.

While Macron has an abundance of naysayers as heir to Merkel’s leadership of Europe, his is the last best hope for a unified European voice and strategy for halting Putin’s upending of the world order.

In an unusual intervention in an EU member state’s national election, Scholz and the prime ministers of Spain and Portugal appealed to French voters to choose Macron over Le Pen.

“We need France to defend our common European values,” the European leaders urged two days before the French election.

“Europe is facing a momentous change. In an attempt to rewrite history, Vladimir Putin has launched a brutal attack on Ukraine and its people,” the three government leaders stated. “The choice French people are facing is crucial for France and for all of us in Europe. They have to choose between a democratic candidate who believes that France is stronger in powerful and autonomous European Union, and a far-right candidate, who openly sides with those who attack our freedom and democracy, which are the fundamental values we inherited directly from the French Enlightenment.”

How much internal support Macron gets from voters in the legislative elections will show whether he can influence the greater goal of defeating Putin’s attempt to restore Russia’s imperial stature at Ukraine’s expense.

In the weeks leading up to Macron’s victory, he made concessions, or at least promises of them, on issues of concern to French voters. He said he was open to discussions with unions on the retirement age rise, an incendiary proposal in a country where most citizens could retire in their mid-50s a decade ago.

“I know that the anger and disagreements that led many of our compatriots to opt for the far right, to vote for this project, must also be addressed,” Macron said on the night of his victory. “This will be my responsibility.”

Carol J Williams
Carol J. Williams is a retired foreign correspondent with 30 years' reporting abroad for the Los Angeles Times and Associated Press. She has reported from more than 80 countries, with a focus on USSR/Russia and Eastern Europe.
Previous article
Fed Up: Delays in Activating Tiny House Villages
Next article
Before or After: A Global Trade Debate