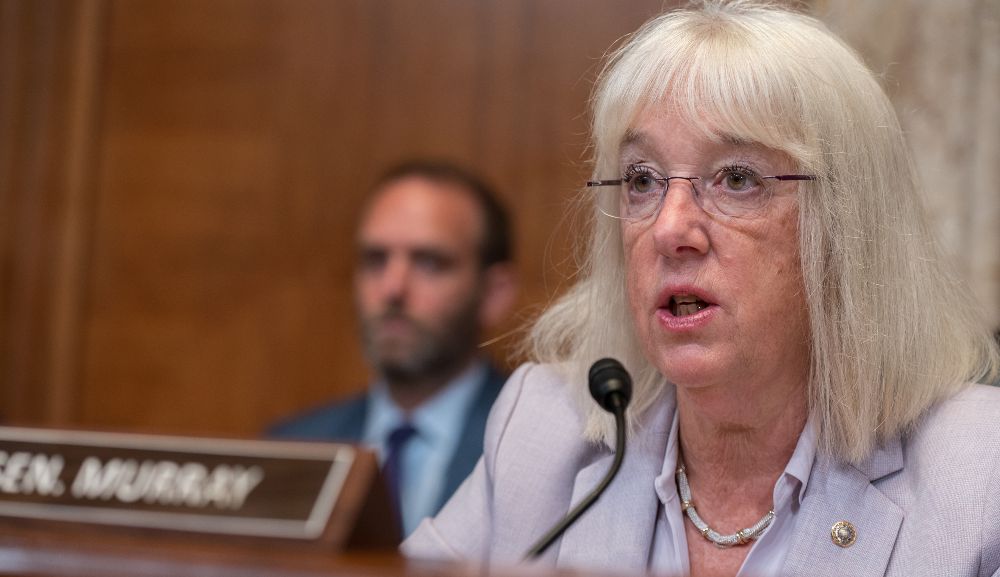 Failure to Meet: What’s Wrong with Washington’s US Senators?

Oregon Sen. Jeff Merkley, D-Ore., quietly marked an anniversary last week, celebrating his 500th town hall in the Beaver State since being elected to the Senate in 2008. This one was a virtual meeting in for citizens of coastal Lincoln County.

If voters keep him in office, Merkley may someday equal numbers put up by his seatmate, Sen. Ron Wyden, D-Ore., who marked his 1,000th town meeting in Lane County (Eugene) last February. The total for Wyden, 970 in-person meetings, 31 virtual town halls, and 15 regional virtual town meetings for multiple counties held during the COVID-19 pandemic. “Choosing the county for my 1000th town hall posed a challenge as hard as somehow having to pick between sunrises in the Cascades or sunsets on the Coast,” said Wyden.

Washington doesn’t get to see senators hold such events at any time of day or day of the year.  Under pressure, Sen. Maria Cantwell, D-Wash., did hold two town meetings in 2017: Most of the folks who turned out at the UW’s Kane Hall just thanked her for coming.  Sen. Patty Murray, D-Wash., has held no town halls in recent years, and is reticent about schedules where voters can catch up with her.

The two Oregon Democrats win their elections in Multnomah, Lane, Washington, and Clackamas Counties in Western Oregon and the Greater Portland area.  Still, they raise the flag in deep-red Eastern Oregon counties. When Washington Democrats held a state central committee meeting in Walla Walla, one member had Ron Wyden as seatmate on a flight back to Seattle.  Wyden had been doing a town hall in nearby Milton-Freewater, Ore.

Each of Oregon’s 36 counties gets a senator’s visit, virtual or in person each year. It’s a state tradition. Even in the 1990s, bedeviled by sexual harassment allegations – which would later force him to quit the Senate – Sen. Bob Packwood, R-Ore., hit the road in a camper, trailed by a truth squad of feminists.

“I hold a town hall in every county, every year, because they enable me to hear directly from folks on the ground about the ideas and priorities that matter most to them,” said Merkley, adding: “My town halls also continue to serve as safe spaces for people to express their points of view during these increasingly divisive times.”

On this side of the Columbia River, House members still hold town halls. Rep. Rick Larsen, D-Wash., with a diverse district, has become a master at disarming a tense or hostile situation. During the height of the Tea Party movement, Larsen faced a stadium in Everett evenly divided between Obama haters and Democratic union activists. He defused the situation by having everyone stand and sing the national anthem.

Seattle Rep. Pramila Jayapal, D-Wash., represents perhaps the nation’s safest house seat, yet she began her tenure in Congress holding meetings in community centers, schools, and even Horizon House, a retirement community. The turnout was relentlessly liberal left. So frequent is uniform head nodding in agreement with Jayapal, a joke went, that it’s best to take Dramamine before the meeting begins.

As Speaker of the U.S. House of Representatives, Big Tom Foley spent Easter week doing town halls in the southeast corner of the state. Foley sat with a Colfax High School student after one session, answering questions for a term paper.  The same angry critic would show up in Walla Walla year after year, wanting to now why America “wastes” so much money on foreign aid each year.

There is much to be learned on the road. Foley represented a district dependent on agricultural exports. The national reporters coming out to see him were surprised at detailed questions on export policy, the U.S. Export-Import Bank, tariffs and other barriers erected by counties protective of their wines.

Sen. Murray should know. In earlier times, when more accessible, she listened to and was moved by stories from women who were victims of domestic violence. It led to a landmark in her Senate career, the 1994 Violence Against Women Act, co-sponsored with colleague Joe Biden. She went to the mat successfully in 2013 to expand VAWA coverage to protection of women on Tribal reservations and LGBTQ victims of abuse. The act was again renewed and expanded by Congress last month.

Why resist town meetings?  Angry people started showing up in Tea Party times. Then-U.S. Rep. Brian Baird, D-Wash., loved meetings in his Southwest Washington district, but saw the fun go out of his job. The angry left showed up for Republican successor Jaime Herrera Beutler, causing her to embrace more sedate coffees.  “Coffees with Cathy” are a staple for GOP Rep. Cathy McMorris Rodgers, who did hold town halls when facing a tough 2018 challenge.

Murray has been the object of threats, including physical threats, from the political extremes.  Fox News once got hold of remarks about U.S. difficulties in Afghanistan and made it appear that Murray was endorsing the Taliban’s social services.

Still, she is being depicted by this year’s Republican challenger Tiffany Smiley as a D.C. creature out of touch with this Washington. In earlier times, with Murray out and about, such charges could be laughed away.  She has, however, taken on accoutrements of a senior Senator, shielded by handlers and with access given mainly to those who agree with her. Example, a recent event put on by FUSE Washington, the state’s leading progressive lobby.

Murray has won five terms in the Senate, dispatching three incumbent House members in the process. She’s had only one real close call, in 2010. Defeat or near-defeat can change a politician’s behavior.  Sen. Slade Gorton, R-Wash., lost his Senate seat in 1986, only to make a comeback in 1988. Sen. Gorton confessed that he had not been listening enough and cultivated a small town-rural base during his second Senate stint.  He held more than a dozen town halls a year and gave hours of his time to local advisory boards.

Such work has rewards. In his 2014 reelection, Jeff Merkley was targeted by nasty TV spots aired by dark money groups.  He placed worried phone calls to wealthy Democrats, begging money to counter the threat of Koch brothers and their allies.  The ads dropped off.  Merkley’s base was solid and more tempting targets were to be found elsewhere.

Joel Connelly
I worked for Seattle Post-Intelligencer from 1973 until it ceased print publication in 2009, and SeattlePI.com from 2009 to 6/30/2020. During that time, I wrote about 9 presidential races, 11 Canadian and British Columbia elections‎, four doomed WPPSS nuclear plants, six Washington wilderness battles, creation of two national Monuments (Hanford Reach and San Juan Islands), a 104 million acre Alaska Lands Act, plus the Columbia Gorge National Scenic Area.
Previous article
All Dressed Up and Ready to House: Why is This Tiny Home Village Just Sitting There?
Next article
Opening Day: Confessions of a Baseball Novice