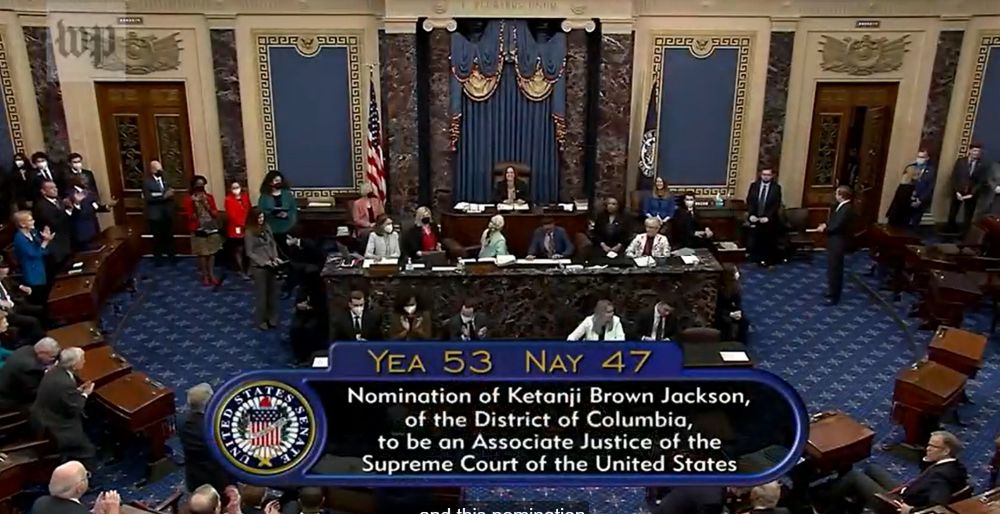 Judge Ketanji Brown Jackson was introduced to America at her Supreme Court confirmation hearings as a person of qualification and intellect. At the same time, the nation received a quite different first dose of Sen. Marsha Blackburn, R-Tennessee. Blackburn went on and on about “culture wars” and asked Judge Jackson to define a woman. Blackburn is a person who judges without evidence, witness this Tweet: “The radical left is teaching five-year-olds that they can choose their own sex. Meanwhile, they’ve put forward a nominee to the Supreme Court who cannot define the word ‘woman.’”

How did Tennessee, home to past Senate Majority Leaders, come to elect a Tea Party supporter to the World’s Greatest Deliberative Body? A Supreme Court confirmation hearing played a role. In 2018, Republicans deployed the “smearing” of nominee Brett Kavanaugh to their advantage in conservative states.  It worked in Tennessee, where Blackburn beat a blue-chip Democratic nominee, ex-Gov. Phil Bredensen.

Judge Kavanaugh was worked over the coals, legitimately because of a specific allegation of attempted rape rendered – hesitantly and reluctantly – by a credible person. The Jackson hearings before Senate Judiciary Committee have shown what a real-life smear looks like.

On the Senate floor, in Tuesday’s debate, Sen. Tom Cotton, R-Arkansas, hit a new low as he stated: “The last Judge (Robert) Jackson left the Supreme Court to go to Nuremburg and prosecute the case against the Nazis. This Judge Jackson might have gone there to defend them.”

The Republicans are at it again, ginning up issues and targeting folk ranging from legal-services lawyers to transgender teens. They have in mind three ends. The GOP “base” is a minority of voters, which means they must be mobilized by stoking anger, particularly in low-turnout off-year elections. Secondly, make it difficult for such non-Republican constituencies as working women, people of color, and young folks to vote. Third, officeholders who stray from the party and the Trump line must be terrorized. Of the three Republican senators who are voting for Judge Jackson’s confirmation, Rep. Marjorie Taylor Greene, R-Georgia, Tweeted on Tuesday: “Collins, Murkowski, and Romney are pro-pedophile.”

I watched the Judiciary Committee hearing with a neighbor who is African American. She was upset at this latest boorish treatment of a black woman. So were many African American women, an outrage given eloquent voice by Joy Reid and guests on MSNBC. But this outrage is not enough and not enduring. Political progressives are roused less often, which is not good for the nation. When it does happen – such as the Judiciary Committee’s treatment of Anita Hill and the growth of the #me-too movement – positive social change results.

Progressives don’t deploy a grievance machine that nurtures past anger. Quite the contrary — the urge is to move on and move ahead. Shiny new matters grab attention.  A vast citizen movement fueled Barack Obama’s campaign for the presidency, but then he seemed to say, “I’ll take it from here.” The activism wasn’t there to advocate for the Affordable Care Act, and the troops were not turned out to defend it in the 2010 election campaign.

Recalling midterm shellackings in 1994 and 2010, there is in 2022 the peril of a “three-peat.” The stakes are too high to sit this one out. Trump is far from gone. The Trump movement is very much alive, and the Republican Party is subservient to it.

With abortion cases before the Supreme Court, Americans may soon see a right taken away.  It has happened before, as when 80 years ago the nation sent Japanese Americans to internment camps, but never with more than half the population affected, and never with a right, the right to choice, consistently supported in polls by a majority of Americans.

Judge Jackson was confirmed by the Senate, not with the 80-plus votes given Ruth Bader Ginsberg but with 53 or 54 votes. She has the candle power to excel on the Supreme Court, but likely never will forget her treatment before the Judiciary Committee. Nor should we. Nor has one Republican, Sen. Lisa Murkowski, R-Alaska, who is voting to confirm based on Judge Jackson’s “range of experience from the courtroom that few can match given her background in litigation.”

Of her decision, Murkowski said Friday: “It also rests on my rejection of the corrosive politicization of the review process for Supreme Court nominees, which, on both sides of the aisle, is growing worse and more detached from reality by the year.”

The proposed revocation of rights is a must-follow, must-act matter for progressives. The selection, nomination, and confirmation of federal judges is also vital to protecting these rights. Note, for instance, how judicial nominations put forward by Washington Sens. Patty Murray and Maria Cantwell have already made the federal bench in Washington look a lot more like the state’s population.