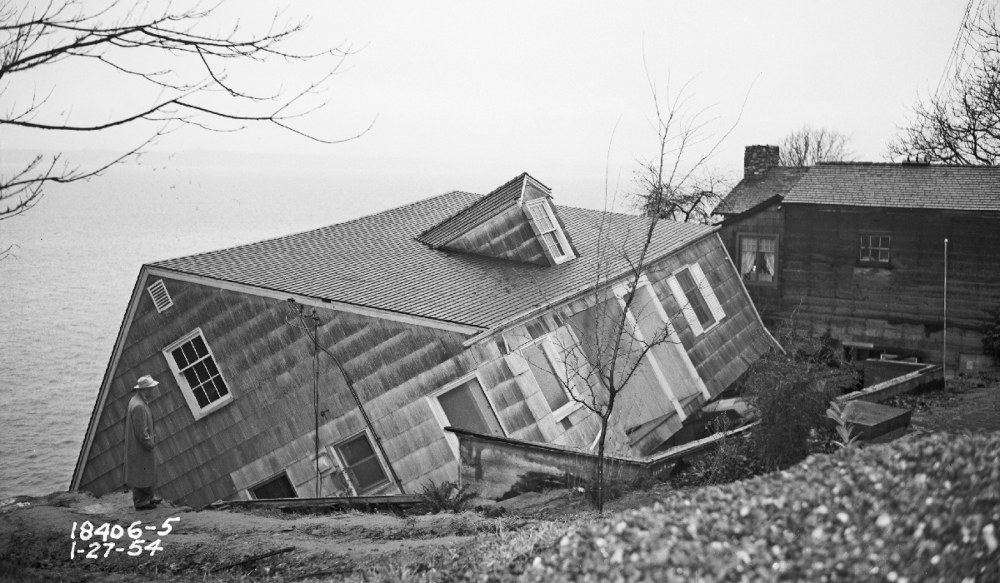 Northwest Rain: ‘How Horrible Is the Day!’

It’s the constant rain and water-logged terrain that are likely to blame for a house sliding down a steep Magnolia hillside Jan. 7. Owners James and Didi Fritts were in their Perkins Lane West home that Friday night when mud and debris knocked the house off its foundation. Didi Fritts escaped on her own while James was trapped and had to be rescued. A week later, Sammy, one of the couple’s dogs, thought to have perished, was found alive.

Perkins Lane West trades matchless views of Elliott Bay for the threat of landslides. There have been dozens of incidents down under that steep bluff. In 1992, Seattle Councilmember Sue Donaldson, head of the land use committee, sponsored legislation restricting building permits to protect environmentally critical areas. The council passed Donaldson’s legislation, but a Canadian developer, Buildings West, beat the clock and obtained building permits before the new ordinance could take effect.

This winter’s rainy season has affected other nearby communities as well. On Jan. 17, a broken water main — coupled with rain-saturated soil — may have caused a landslide and collapse of a Bellevue home. The two-story dwelling slid from its foundation in the early morning hours. First responders were fortunately able to free Barb Surdi and her golden retriever unharmed. John Surdi, Barb’s husband, had gone outside earlier to investigate the water main break. The incident led to evacuation of seven nearby homes in the Somerset neighborhood.

In other words, this wet, moist, drenched land continues to live up to its centuries-old notoriety  and to the risk of landslides, as explored in this Seattle Times story by Lynda V. Mapes.

The Pacific Northwest’s reputation for rain is as ancient as the first explorers. It was February of 1541 when Bartolome Ferrelo, a Spanish mariner sailing up the Northwest Coast, encountered unrelenting rain, miserable enough to drive him back to California. Then came Sir Francis Drake in the Golden Hind in 1547. Although it was June, Francis Fletcher, the ship’s chaplain, chronicled the chilly rain, the “generall squalidnesse” and “the most vile, thicke and stinking fogges.”

When the Lewis and Clark expedition finally reached the Columbia River on Nov. 5, 1805, Captain William Clark grumbled that “it rained all the afternoon part of last night and rain continued this morning…we are all wet and disagreeable.” He describes the rain and pervasive dampness rotting their clothes, moccasins, blankets and robes, as well as “breeding a legion of fleas.” As yet another rain storm blew in, Clark concluded, “O how horrible is the day!”

No less depressed were Seattle’s first white settlers. The Denny party of 24 landed on Alki Beach Nov. 13, 1851. After a rough voyage, they encountered cold wind, pounding rain and an injured kinsman who’d sliced his leg while trying to construct the still roofless cabin. David Denny greeted them saying, “I wish you hadn’t come.” His sister-in-law, Mary Denny, sat down on a log and burst into tears.

Locals shared that outlook. The late, great poet Richard Hugo, who grew up in White Center in the 1920s, reflected on the city’s perpetually leaden sky, “turning the [Duwamish] river gray.” Hugo wrote of “the moody damp and wanton rain.”  He said: “What is harsh about this rain-soaked landscape is the bone-infecting, soul-deranging, forest-brooding damp.”

Other rain-obsessed passages stand out in The Egg and I, Betty MacDonald’s 1945 best-selling novel. MacDonald fictionalized her own real misadventures on a chicken ranch on the Olympic Peninsula. She recalls, “Along about November, I began to forget when it hadn’t been raining and became one with the characters in novels about rainy seasons, who rush around banging their heads against the walls, drinking water glasses of straight whiskey and moaning, “The rain! The rain! My god the rain!”

In The Good Rain, Seattle journalist Tim Egan wrote about our rain-washed landscape:  “Winter days can be so dark and dank that a flashlight is helpful on a noonday stroll. For nine months out of the year meteorologists issue one basic forecast: rain turning to showers. How can they tell? It’s the threat, the constant ambiguity in the sky that drives people crazy.”

Echoing that view, Seattle Times pundit Terry McDermott authored a meditation on the months-long rainy season. He said, “It’s not the amount of rain that defines the Northwest. It’s the persistence.” He likened rain to a relative who comes for the night, stays through the weekend, misses his plane on Monday and starts moving in, taking control of the refrigerator, and “then it dawns on you, he’s taken over your life.”

McDermott and Egan were contemporaries of Emmett Watson, the scribe who invented “Lesser Seattle” to counter Chamber of Commerce boosterism. Watson told residents to join the KBO (“keep the bastards out”) and write to relatives about pounding rain, mudslides, and other disasters. He urged Mayor Wes Uhlman to appoint a Rain Committee “to exploit our most important product, and spread the word: Seattle is a dark, ugly, unfriendly place and probably beyond saving.”

But, although rain and gloom inspire laments, outbursts and dark humor, our climate does have defenders. Novelist Tom (Another Roadside Attraction) Robbins, a North Carolina expat, proclaimed, “Yes, I am here for the weather.” He wrote an anthem of praise to the wet stuff, proclaiming “It will rain a miracle; it will rain a comfort, and it will rain a sense of salvation from the philistinic graspings of the world.”

Robbins isn’t the only newcomer to defend the rain. Award-winning African-American poet and writer Colleen J. McElroy, a University of Washington emeritus English professor, arrived here one autumn to teach speech at Western Washington University. She first wrote with Midwest skepticism bemoaning the “gray smother of clouds” and “the constant drizzle.” But by spring, when her mother called to report heavy snows in St. Louis, McElroy laughed and said, “But I don’t have to shovel the rain.”

For a scientific perspective, one can turn to Cliff Mass, University of Washington professor of atmospheric science. Although controversial for his outspoken political views, Mass is seldom faulted for knowledge of the region’s rain patterns. He points out that, on average, Seattle gets only 38.4 inches of rain annually, compared to cities like Boston’s 43.8 inches, New York’s 43.1, and Miami’s 57.1.

In his book, The Weather of the Pacific Northwest, Mass observes that the region’s rains are concentrated during a wet season from November to mid-February, with little precipitation in other months. The meteorologist says he holds “dry season” parties during “the drought week at the end of July.”

Mass relishes the irony that Seattle’s baseball stadium (T-Mobile Park) was built with a $100-million-dollar movable roof whereas ballparks back east, known for summer rains, remain open to the sky. He adds, “Stranger yet, the football stadium (Lumen Field) does not have a roof although football is played during Seattle’s wettest period.”

As with most weather, we locals can gripe about the region’s rainy season, but can’t do more than try to endure weather cycles, and, when asked by Back Easters about the phenomenon, shrug it off and say, “Oh, you get used to it.” In fact, it really does rain a lot, both in fiction and nonfiction.

Jean Godden
Jean Godden wrote columns first for the Seattle Post-Intelligencer and late for the Seattle Times. In 2002, she quit to run for City Council where she served for 12 years. Since then she published a book of city stories titled “Citizen Jean.” She is now co-host of The Bridge aired on community station KMGP at 101.1 FM. You can email tips and comments to Jean at jgodden@blarg.net.
Previous article
Joan Didion’s Hawaii
Next article
How Democrats Could Counter Republican Attacks on Voting Rights