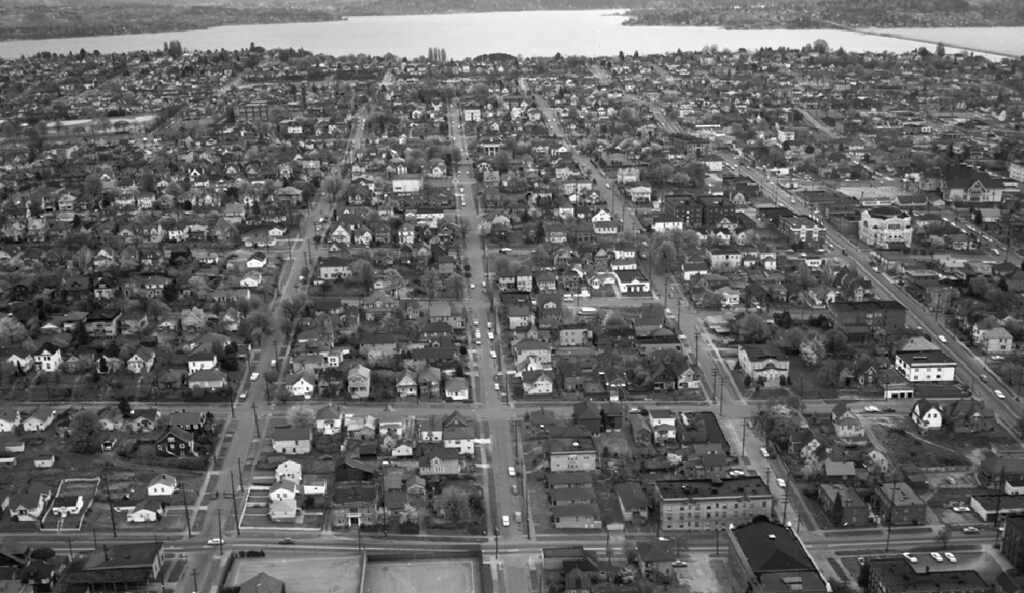 How Seattle’s Central District became the Heart of the City

The central Seattle neighborhood, sometimes called the Central District or CD, is the heart of residential and rental Seattle.  The city’s history and growth followed north-south and west-east wildlife and Native paths through the Central Area zone.  Like spokes on a wheel, Seattle’s 170-year life as a settlement has been monitored, nudged, and enriched by Central Area activity.

The Central Area’s first residents were Native Americans, along with deer, bear, coyotes, racoons, mink, otter, ducks, geese, coot, grebe, and loons.  Overhead, blue heron, quail, eagles, and humming birds were in control.  The surrounding waters teemed with salmon, trout, Northern pike, minnow, black bass, and a variety of bivalves.  The first human visitors, most likely Natives from northern climates, followed the melting ice to find food and temperate conditions along the shorelines, valleys, and the nearby hillsides.

Pioneer family names such as Collins, Van Asselt, Mapel, Denny, Yesler, Boren, Low, Bell, and Terry found the hillsides and valleys of Seattle’s Central Area just right for business and family.  The region boasted what appeared to be endless forests, water routes to everywhere, and a temperate climate.

John J. McGilvra cut a route to the lake through the Central Area, which became Madison Street.  Sophie Frye Bass, in her charming book Pig-Tail Days in Old Seattle, described that path as “a hilly, gravelly, bumpy road cut through dense forest and brush.”

This mid-town cluster of small farms, hunting grounds, salmon streams and viewpoints would eventually be peopled by the great homes of local business and cultural leaders, beginning on First Hill. Other early settlements were Mother Joseph’s Providence Hospital at 5th Avenue and Spring Street, Seattle University at the corner of Madison and Broadway, Washington Hall (established as the Danish Brotherhood Hall), the row of churches along 8th Avenue, hospital complexes atop First Hill, and educational institutions such as Horace Mann, Garfield, and Edmond S. Meany schools.

Ethnic, national and racial mixing has a long history in the Central Area.  Beginning in 1860 Chinese single men were brought to the Pacific Northwest to construct railroads and mines; later, Chinese businesses were established throughout First Hill and Capitol Hill.  Japanese immigrants came later, followed by Hawaiians, called Kanakas, Pacific Islanders, and Filipinos.  As Seattle’s port increased, sailors and dock workers from throughout the world drifted into the burgeoning town.  Among these seafarers were African Americans seeking jobs and escaping “Jim Crow” in the Old South.

Notable among the Black newcomers was William Grose, owner of a hotel and restaurant called “Our House” in Seattle’s “Skid Road.”  After the Great Seattle Fire of 1889, Grose lost his business, but then established a small farm between 23rd and 27th Avenues and Howell and Olive Streets.  His new residence attracted other African Americans to what became known as the Central Area. Redlining of other parts of town meant that the Black concentration in the CD was able to gain a critical mass.

By 1900, Jews in Seattle reached a population of 1,600.  Temple De Hirsch at E. Union Street on Renton or Second Hill became a leading Reform synagogue in Seattle.  Members supported an influx of Jews from Germany (Ashkenazim) and later Turkey and the Greek Islands (Sephardim).  Central Area businesses along Cherry Street between 34th and 23rd Avenues were mostly Jewish-owned, anchored by Brenner Brothers Bakery.

Nordic residents were not confined to Seattle’s old Ballard, as Scandinavians found the Pacific Northwest a land of fjords, timber, fishing, farming, and shipping.  Finn Halls were established in the Central Area, and a Swedish folk dance troupe thrived in the Denny-Blaine neighborhood.

The CD may have lost Black population to gentrification, but it has gained Asian and Hispanic residents. It is still a rich ethnic blend and the heart of Seattle progressive voters.

Junius Rochester
Junius Rochester, whose family has shaped the city for many generations, is an award-winning Northwest historian and author of numerous books about Seattle and other places.
Previous article
Crabby ’bout Crab
Next article
Interview: Jelani Cobb on Race and Organizing People at the Bottom