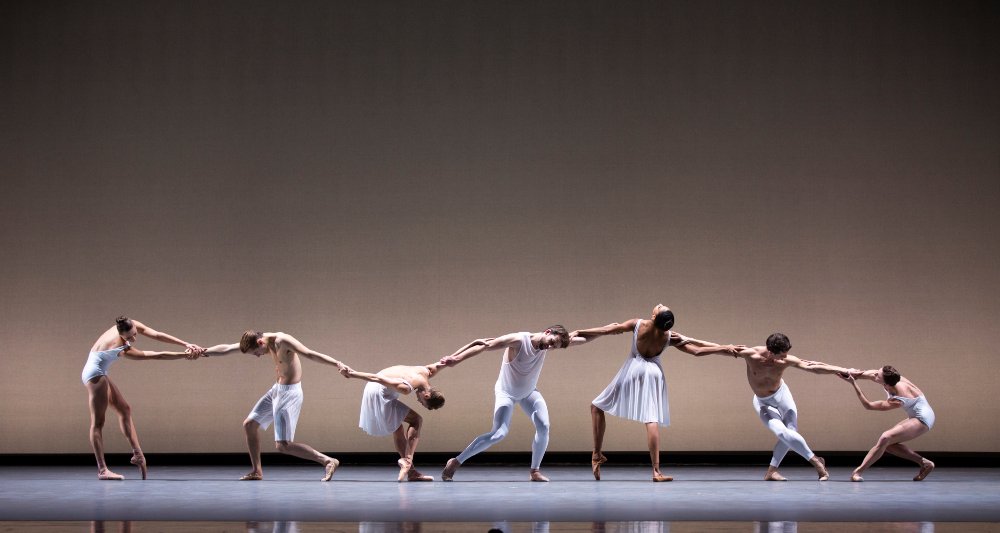 At the end of Beyond Ballet, PNB’s second live program under current live-performance COVID rules, my date and I joined the hearty applause for the company premiere of Jason King’s The Personal Element.

As we collected our belongings to depart McCaw Hall, I asked her what she thought about the piece. Judicious as always, she paused, then said: “I liked it. I’d like to see it again, without the music.”

My sentiments exactly. According to the fuddling program notes, Jason Moran is a jazz-focused composer with strong affinities for multimedia experimentation.

What we heard as we watched sounded like improvised musings by a pianist waiting for the recording engineers to get their act together, more a distraction than a support.

But what we saw was a continuously gripping evolution of movement: eight dancers in vestigial ice-blue costumes invisibly connected even when apart, and, when they came together in confrontation and collision and writhing chains, the connection visceral enough to entangle us watching as well.

This is choreography of a high order of complexity; I plan to see it again when the program streams later this month—maybe with the sound turned down.

The opening piece was a revival of Ulysses Dove’s Dancing on the Front Porch of Heaven, a collection of solemn tableaux along reverent lines—upturned faces, check; cupped hands, bended knees, check—set to one of Arvo Pärt’s minimalist sound-curtains for bells and strings: revolutionary in the concert-hall 50 years ago and a fatal temptation for choreographers ever since.

The centerpiece of the program, Ghost Variations, was set to a cut-and-paste soundtrack of piano pieces by Robert and Clara Schumann originally devised for one of PNB’s streaming-only COVID programs. Jessica Lang’s spooky-romantic black-and-white conception depends a bit too much on program-note reading for coherence, but the staging, with its shadow-pairings and swoopy vampire partnering, is assured enough to work on the big stage as well. With the electric exhilarations of King’s Personal Element to conclude, not a bad way to get back down to the business of dancing and the long parade of sugarplums coming up.

Beyond Ballet will be streamed (for a fee) from November 18 th through 22 nd.

Roger Downey
Born in Canada moved to Peru's altiplano at the age of six; came to the U.S. at 10 to discover that you don't use your feet to dribble the ball. Learned from the git-go that "America" is an idea, not a place.
Previous article
New Election Numbers are Definitive
Next article
Inside the Funeral of Colin Powell