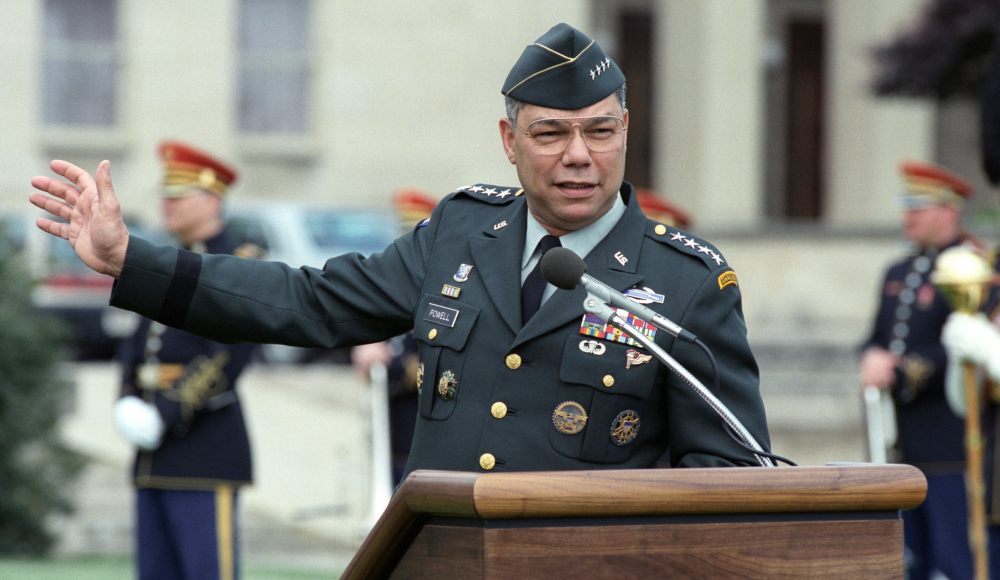 Rules for Leadership: What I Learned Interviewing Colin Powell

Gen. Colin Powell was leaning across the desk in his office at America’s Promise gesturing to the lunch that had just been set before him. I had arrived to interview him about his new venture and declined the offer to munch along with him. I needed my hands free to take notes. But it struck me as so typical of Powell, a man whose professional life often involved standing on ceremony, that he could be so casual and welcoming.

I first interviewed him at the Pentagon when he was chairman of the Joint Chiefs of Staff and our country was engaged in the First Gulf War. For that interview, we sat around a small table, and a chest full of medals gleamed on his uniform.  I remember how he shared with me his rules of leadership. I kept a copy pinned to the wall of my office for many years afterward:

When I next interviewed him, it was at his new home in McLean, Virginia. Powell had retired from the military after a career marked by repeated firsts and a stellar reputation for his leadership. Now at home, he admitted that he had confronted a popular adage among military couples at that time: “I married you for better or worse, not for lunch.” He told me how Alma, his wife, had made it clear that he was on his own for the midday meal. He said this had led him to the discovery that his local supermarket had rows of food you could scoop up for lunch. After years of being served meals by military stewards and not doing his own grocery shopping, he described this the way an astronomer might expound on discovering a new planet.

He delighted in showing me around his house. Two moments stand out. First, he took me downstairs to his man cave. This was where Alma had relegated his souvenirs and toys, things like carved coconuts. It also was adjacent to a hot tub room which he had decorated with portraits of himself. With a smile that lit up his whole face, he pointed out the many paintings people around the world had sent him and laughed at how widely they differed, how the painters from different countries seemed to find a way to make him look more like their own leaders, like the one that showed him as a virtual stand in for Egypt’s Mubarak.

Then he took us into his garage. He stepped aside to pull on well-worn overalls and showed off the latest Volvo he was working on. He had a longtime passion for fixing aging Volvos, a passion that he could indulge now that he had retired.

While newly retired, he had started work on his autobiography. I next interviewed him in Chicago where he was promoting My American Journey at the annual American Booksellers Association convention.

In the book, he recounts his early years as the son of Jamaican immigrants struggling to get ahead. He talks about living in the Bronx where he helped orthodox Jewish neighbors as a “Shabbos goy,” a non-Jew who could turn on and off their lights while they observed the Sabbath proscription against doing so themselves. He describes how the City College of New York led him to the Army ROTC and the start of his military career.

In the book he does not hold back when describing how hard he had to court his future wife, Alma, or what it was like for them driving from the North to his next post at Fort Bragg, North Carolina. He was a young officer in the U.S. Army, but the South was segregated and they had to pack food for the trip because they knew they wouldn’t be served at restaurants.

Today, as Powell noted in a 2020 commencement address, there are 14 secondary and elementary schools across the country named after him – including some in states where he once had to use segregated restrooms and couldn’t sit at lunch counters.

It’s not surprising to see Powell celebrated by schools because he spent much of his post-military career focused on helping children. In 1997, he chaired The Presidents’ Summit for America’s Future that led to the creation of America’s Promise where Powell served as founding chairman. Interviewing him there, besides the offer of the french fries, I found Powell animated by this new mission of assuring that all children enjoy a healthy start, caring adults, safe places, effective education and opportunities to help others.

I understand that as a journalist perhaps I only saw Powell as he chose to present himself to me. But I’ve interviewed many people in all walks of life over the years and Powell did not come across to me as scripted or manipulative. He had a plate full of french fries and didn’t want to eat in front of me without offering to share. He took real joy in showing off his aging Volvo and the bizarre painting that made him look like Mubarak’s twin. When he smiled, his eyes always lit up.

It’s been a challenge for me to wrap my mind around his later role in the invasion of Iraq. In 2001, Powell had again answered the call to service when President George W. Bush named him Secretary of State. Powell was the first Black person to lead the State Department. It was not an easy tenure. His role in the administration’s claim that Iraq had weapons of mass destruction ended up tarnishing his reputation. Inevitably, the many obituaries and write ups about Powell that we will see in coming days will highlight how the general who once told a nation to “trust” him, lost that trust.

I never interviewed Powell while he served as Secretary of State. For me, the images that now come to mind as I read about his death show him standing with pride in his overalls next to an old Volvo or standing to one side at an event honoring his beloved wife Alma where he is holding her purse while she stepped up on stage to receive her tribute. I see him in uniform as the first Black Chairman of the Joint Chiefs of Staff. I see his rules of leadership and just want to say, General Powell, thank you for your service.

Linda Kramer Jenning
Linda Kramer Jenning is an independent journalist who moved to Bainbridge Island after several decades reporting from Washington, D.C. She taught journalism at Georgetown University and is former Washington editor of Glamour.
Previous article
Postcard from Zurich: Connections to Home
Next article
New Poll: Harrell With Strong Lead, Plus Some Surprises