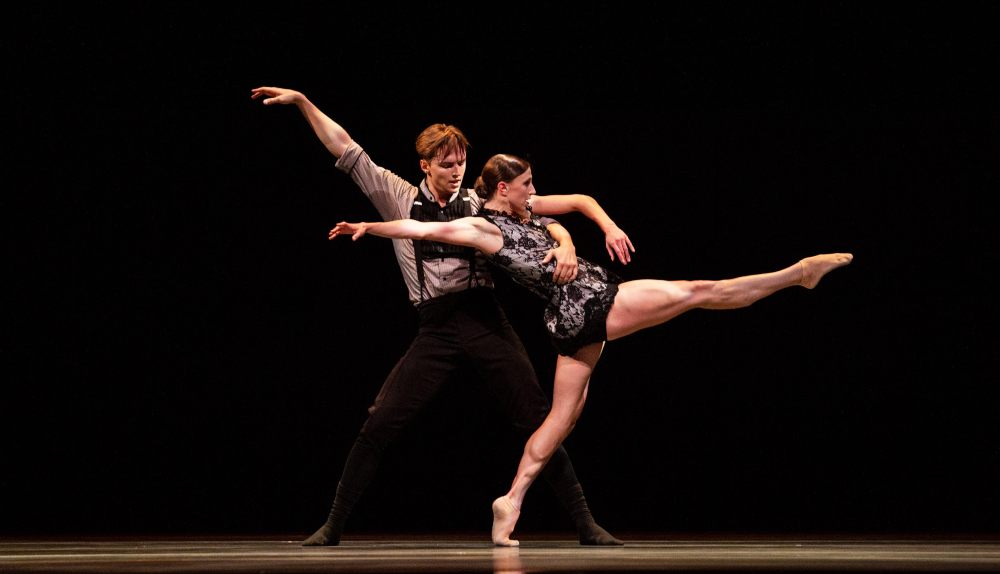 Longer and Longeur: PNB’s Alejandro Cerrudo and the Mirroring of Coincident Sounds

I looked forward to Pacific Northwest Ballet’s first live-and-in-person performance in 16 months as an opportunity to clarify my experience of the work of the company’s titular resident choreographer Alejandro Cerrudo. Instead, after seeing three of Cerrudo’s works in one afternoon, I found myself more frustrated than ever.

In PNB’s 16-month video-only “season,” Cerrudo provided the company with his first piece created “on” its dancers since his 2014 debut with Memory Glow. A pair of duets entitled Future Memory, it confirmed Cerrudo’s devotion to the fashion for endlessly undulant movement in half-light set to endlessly undulant New-Agey music.

But despite its brevity, Future Memory seemed to me much more solidly constructed than most such ventures, with shared movement motifs reflecting between its segments in both spatial dimensions and time, and the work became more memorable with each video re-viewing.

So much more memorable than anything in the entire hour-plus program on October 8 that I was praying it was not a fluke.

Seeing three Cerrudo works created between 2012 and 2015 in a row is to enter a dance world which discards most of the conventions which have underlain the art of ballet since the mid-seventeenth century. Parings-down and re-purposings have been a way to refresh ballet’s idioms during that long history. But this time each has had the effect of narrowing the medium’s overall range without stretching it in another direction.

Begin with Cerrudo’s approach to music. He’s not alone among living choreographers in setting works to collages of “found” material: playlists, in effect. A generation or so back, Twyla Tharp gained notoriety by setting dances to a suite of Beach Boys tunes or Sinatra singles.

A typical Cerrudo score is assembled from less identifiable sources. His most recently-composed contribution to the PNB repertory 2015’s Silent Ghost, lasts 20 minutes and is composed of five works by six artists. 2012’s Little mortal jump crams 10 pieces by seven artists into 26 minutes.

The individual creators of these soundtracks are numerous, but all are inheritors of the ever-evolving-loop manner developed in the 1970s by the eminently imitable Philip Glass. The music is constantly, nervously in motion but without a sense of forward harmonic or structural direction.

What we see on stage in Cerrudo is a near-mirroring in motion of coincident sounds. The choreography is fluid, flexible, constantly folding, an interaction of equal mutual forces embodied by undifferentiated partnering as unlike the polar gender opposition of classical ballet as imaginable.

Ballet partners look forward, out into the audience; Cerrudo’s partners look only at each other and into the wings. Ballet movement invokes space; Cerrudo dancers ignore everything outside their own reach. Ballet bodies extend, legs lift, spines arch upward. Cerrudo keeps his dancers near the floor, legs low, while arms grapple and flail.

It’s in the arms that Cerrudo’s most profound denial of ballet form appears. It took several centuries of technical evolution to turn arms and their awkward elbows into graceful enhancements of the dance.

In Cerrudo the elbow is back, and arms flail free or gesture in stiff abstract pantomime. When it’s effective, it’s more in the way Javanese shadow-puppets are effective; striking visually but dramatically flat and often visually awkward.

This all may sound as if it’s actively disagreeable to watch Cerrudo’s work. That’s not true. He is an exceptional creator of ingenious movement, striking and stimulating to the eye and clearly satisfying his dancers’ desire to show their skill and training. But prolonged exposure to his work leads to monotony: so much mini-action and detail; so little drama and grand design.

I cling to my recollection of Future Present as evidence of growth and maturity in PNB’s long-resident choreographer. But simultaneously comes news that Cerrudo’s infatuation with big, fiddly concatenations of heterogeneous materials like the aptly-named One Thousand Pieces (seen here in excerpt this month and at grueling full-70-minute length last March) has not been transcended in his most recent work.

Brian Siebert’s New York Times’ trashing of Cerrudo’s recent self-produced show at the Joyce Theater captures the choreographer’s mannerisms and longeurs in cruelly memorable terms. Between 2010 and today he was one of the world’s heralded young chorographers. But fashions change. Seattle’s resident choreographer doesn’t have much time left to show he’s not last-season’s flash in the pan.

Roger Downey
Born in Canada moved to Peru's altiplano at the age of six; came to the U.S. at 10 to discover that you don't use your feet to dribble the ball. Learned from the git-go that "America" is an idea, not a place.
Previous article
Ojai: A 75-Year Conversation About Where Music is Going
Next article
Help! They’re trying to Gerrymander Me!