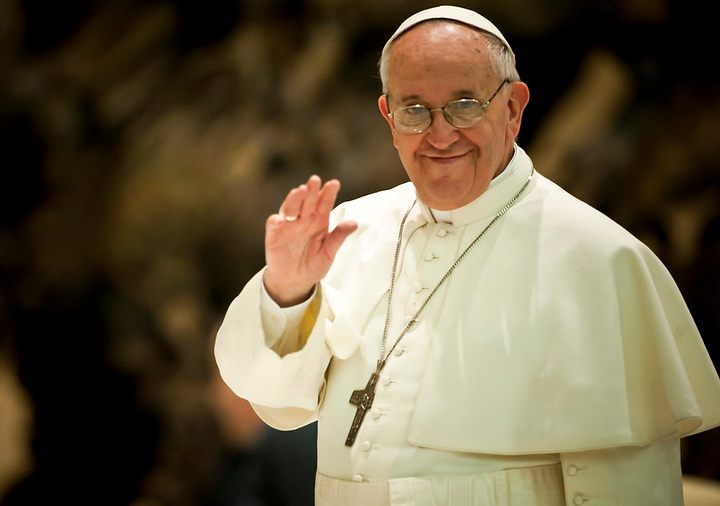 Pope Francis To US Bishops: Stay Out of Politics!

The Pope had a long chat with reporters during a return flight from Slovakia to Rome. He was asked about the communion flap in the United States. “I have never refused the eucharist to anyone,” Pope Francis replied, although noting that he has never been approached at the altar rail by a pro-choice politician.

Addressing a broader question, the proposed weaponizing of the communion wafer, Francis stressed that priests and bishops should act as pastors. “And what should pastors do?” he asked. “Be pastors, and not go condemning, condemning.”

The U.S. Conference of Catholic Bishops is split but with a strong conservative presence.  A statement issued by USCCB chairman Archbishop Jose Gomez of Los Angeles, at Biden’s inauguration, rebuked the 46th president for pursuing “certain policies that could advance moral evils.”  In turn, Chicago Cardinal Blasé Cupich rebuked Gomez for his “ill considered” statement.

Pope Francis delivered a warning while winging home to Rome from Bratislava.  “Whenever the church, in order to defend a principle, didn’t do it pastorally, it has taken political sides,” he said.  “If a pastor leaves the pastorality of the church, he immediately becomes a politician.”

The pontiff repeated his definition that “communion is not a prize for the perfect” but instead a “gift of the presence of Christ in the church.” He argued earlier this summer that “the eucharist is not the reward of saints but the bread of sinners.”

Francis did not move far from church doctrine.  He described abortion as “homicide,” adding “It is a human life. This human life must be respected – this principle is so clear.”

Conservative prelates in the United States are clearly not in communion with the pope’s position on the eucharist, or the warm greetings he extended to Biden in a call last January. Arch conservative San Francisco Archbishop Salvatore Cordileone stated recently: “Because we are dealing with public figures and public examples of cooperation in moral evil, this correction can take the public form of exclusion from receiving holy communion.”

Archbishop Joseph Naumann of Kansas City, who heads USCCB’s pro-life work, has said of Biden:  “How can he say he’s a devout Catholic and he’s doing these things that are contrary to the church’s teachings.”

Pope Francis was in a talkative mood Wednesday. He argued that states should pass legislation guaranteeing health coverage and inheritance rights to same-sex couples.  “Marriage is marriage: That doesn’t mean condemning people who are like this. No, please. They are our brothers and sisters and we must accompany them.”

But the Seattle Archdiocese has come under fire for opposition to LGBTQ rights.  Two high schools, Eastside Catholic and John F. Kennedy, have witnessed forced resignations of gay and lesbian faculty.  Hundreds of students and parents from each school protested outside the diocesan chancery.  The state legalized same-sex marriage with support from a Catholic governor, Christine Gregoire. When then-Archbishop J. Peter Sartain campaigned against the 2012 marriage equality referendum, more than 500 supporters of same-sex marriage rallied outside St. James Cathedral.

Pope Francis also reiterated his strong support for vaccination against the COVID-19 pandemic, saying “humanity has a history of friendship with vaccines.” (Cardinal Raymond Burke, a leading anti-vaxxer in the Catholic Church, was recently hospitalized with COVID-19.)

The Pope is beginning to leave his mark on the conservative American hierarchy.  He has named progressive cardinals in Chicago, Newark and Washington, D.C.:  Cupich was elevated from his previous posting as Bishop of Spokane.  Such luminaries of the Catholic right as Gomez and Philadelphia’s longtime Archbishop Charles Chaput have pointedly not received red hats, although their dioceses have been traditionally headed by cardinals.

Joel Connelly
I worked for Seattle Post-Intelligencer from 1973 until it ceased print publication in 2009, and SeattlePI.com from 2009 to 6/30/2020. During that time, I wrote about 9 presidential races, 11 Canadian and British Columbia elections‎, four doomed WPPSS nuclear plants, six Washington wilderness battles, creation of two national Monuments (Hanford Reach and San Juan Islands), a 104 million acre Alaska Lands Act, plus the Columbia Gorge National Scenic Area.
Previous article
The Key to Getting Better Health Insurance
Next article
Measuring Seattle’s Soda Tax: This is Why That’s So Difficult