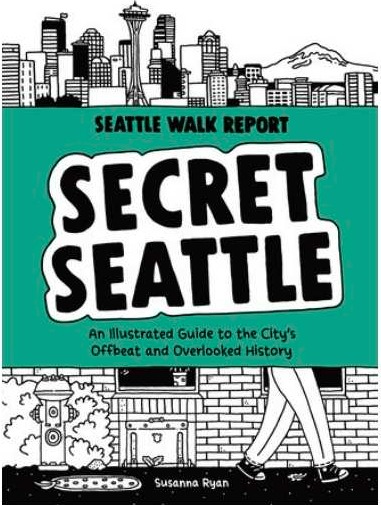 On a Tour with a Cartooning Librarian

Seattle librarian Susanna Ryan wants to be your guide when it comes to strolling around the city. The pert young woman just finished writing “Secret Seattle.” Like her earlier best seller, “Seattle Walk Report,” the new book is filled to the margins with puckish cartoons and entertaining stories about Seattle’s offbeat and “woefully overlooked history.”

When introducing herself recently, Susanna reported, “My mother said I was born holding a pencil. I didn’t realize it wasn’t true ’til I was 11 or 12.” Susanna also describes her first name as an easy one to remember, “having two of each letter except ‘u’.”

Equipped with her trusty pencil (maybe a pen now) she irreverently cartoons everything she spots during her strolls across the city: from vintage fire hydrants (would you believe we have 18,000?) to company logos stamped on the bricks that paved Seattle streets. As our guide to these and other secrets, Susanna has developed a stylized icon. Her cartoon self morphs from a torso-less pair of sneakers to — look! Up in the sky – it’s the super Seattle Subvisionary who is using her powerful x-ray vision to let us peek under the city’s streets.

My favorite scene comes after page 32, the one that’s titled “Statues of Notable Seattle Men” and depicts luminaries like Ken Griffey Jr., Roberto Maestas and Gov. John McGraw. The next page is topped with a similar banner: “Statues of Notable Seattle Women.” Curiously page 33 is totally blank except for cricket noises in the corner. That empty page invites readers to suggest women worthy of a statue. Who’s it to be: Photographer Imogen Cunningham? Writer Betty MacDonald? Mayor Bertha Knight Landes?  Or perhaps my own favorite: Catherine “she did what she could” Maynard?

Apart from her day job at the library (Montlake Branch, soon to reopen), Susanna “Ryan is the city’s own urban rambler — a fervent flaneur — adept at the research ability and curiosity to discover what’s behind features like the tiny, less-than-an-acre parks and the terra cotta figures that live on our buildings.

That she occasionally lapses into outrageous puns (describing the Belltown Union Stables building as once home to important “neighhh-bors”) is almost excusable. But the best news is that apart from a chance to buy and learn from one of her best sellers (available at local bookmongers), we can look forward to Susanna soon contributing an occasional report, just for followers on Postalley.

Jean Godden
Jean Godden wrote columns first for the Seattle Post-Intelligencer and late for the Seattle Times. In 2002, she quit to run for City Council where she served for 12 years. Since then she published a book of city stories titled “Citizen Jean.” She is now co-host of The Bridge aired on community station KMGP at 101.1 FM. You can email tips and comments to Jean at jgodden@blarg.net.
Previous article
What Would You Trade?
Next article
Port Townsend’s Love Affair with Wooden Boats