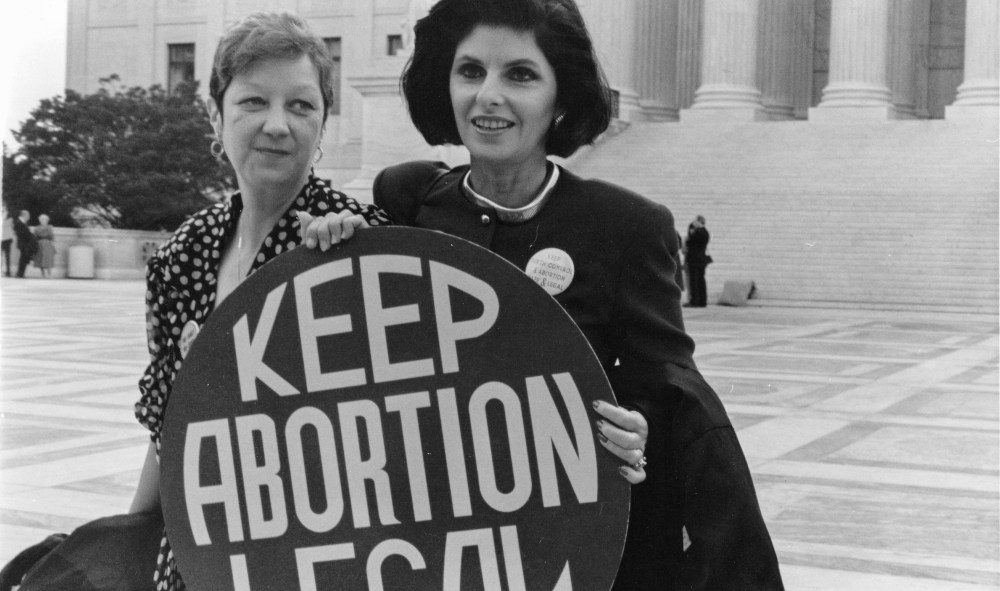 Once More, to the Barricades for Abortion Rights

I can remember long ago marching and carrying a sign in favor of a woman’s right to choose an abortion. Along with many others, I joined  demonstrations in support of Referendum 20, the ballot measure that legalized abortion in Washington in 1970. And now, here we go again.

In November of that year, 56.5 percent of state voters approved Referendum 20. Washington thus joined a handful of states — Hawaii, Alaska, Colorado, and New York among them — in making abortion legal. Washington, however, was first to pass the right with an affirmative vote of the people. It would be three more years before the Supreme Court’s 1973 handed down the Roe v. Wade decision “establishing a woman’s right to have an abortion without undue restrictions or interference from government.”

In the late 1960s and early ‘70s, there was widespread bipartisan support for women’s reproductive rights. Referendum 20 had been introduced in the Washington Senate by Republican Sen. Joel Pritchard and in the House by Democratic Rep. William Chatalas. At that time, the national Republican Party had pro-choice as part of its national platform. Republicans like Richard Nixon, Barry Goldwater, Gerald Ford, and George H.W. Bush were all pro-choice.

It wasn’t until 1976, three years after Roe was decided, that the national Republican Party flip-flopped and took a stand promising, if elected, to back an anti-choice constitutional amendment. Prior to that, it was more often Democrats who opposed a woman’s right to choose.

After the Roe decision, Washington state revised its statute to reflect the more liberal Roe v. Wade position of the Supreme Court. Washington’s Referendum 20, in order to obtain legislative approval, had attached several conservative provisions. But, with the clear wording of Roe v. Wade, it would no longer be necessary for a Washington woman, if married, to get her husband’s consent, nor, if under 18, to obtain parental approval.

However, it was only a matter of a few years before pro-life forces began to chip away at the right to abortion in this state and others.  Despite majority acceptance of abortion in opinion polls nationally, states with statehouses and governor’s offices dominated by Republicans worked to limit access to reproductive health care.

The incursions into women’s rights ranged from requiring an invasive pre-abortion ultrasound to mandating counseling and waiting periods. There were obstacles like prescribed width of the clinic doorways and stricter medical credentials for providers.

Even in this state, as recently as 2013, 18 members of the Washington State Senate introduced a bill requiring women under 18 to notify parents or a legal guardian before having an abortion.  That law, which fortunately did not pass, would have required that parents or guardians receive 48-hours notice from the medical professional or agency intending to provide the procedure.

For those with long memories, it is incredible to believe that we are still discussing women’s reproductive rights nearly half a century after the U. S. Supreme Court decided Roe v. Wade by a 7-2 majority. But the stark reality is that, on the first day of September, 2021, we learned that we might no longer be a nation that abides by its own constitution or settled law. By a 5-4 decision, the Supreme Court, without explanation, decided not to block Texas’ blatantly unconstitutional law. That law, passed in May, bans abortion after six weeks, a time when many women are unaware they might be pregnant.

Other states have passed similar laws, but those laws still face legal clouds and run into the Roe v. Wade restrictions. The Texas law with no exceptions for cases of rape, incest, or to protect the life of the mother is the first to be implemented and to become the law of the land and purports to find a way around Roe.

The Texas law evades Roe by providing for enforcement, not by the state, but by deputizing any private citizen from anywhere in the world to sue anyone who performs an abortion or aids and abets an abortion. That provision gives the complaining party standing to collect $10,000 as well as legal fees. In other words, the law permits and encourages bounty hunters, leaving our nation at the mercy of vigilante justice.

Given this monstrous law and the court’s refusal to stay its provisions, legal scholars and others have been earnestly debating what can be done next?

Responding on Sept. 9, Attorney General Merritt Garland filed suit against Texas over the law and its alarming scheme of deputizing private individuals. Garland said the DOJ will seek an immediate injunction to block the law from taking effect and warned other states against passing similar laws. He expressly cited the constitution’s supremacy clause that gives federal law precedence over state law. He also underscored equal rights protections guaranteed under the 14th Amendment.

Meanwhile, another solution is for Congress to enact the Women’s Health Protection Act, which enshrines the right to provide and receive abortion care. Although the act will most likely pass the House, in the Senate chances aren’t good, for it would face Minority Leader Mitch McConnell and the Senate filibuster.

There also are other possible legal avenues. An article in the Boston Globe by Harvard professors Laurence Tribe and David Rosenberg drew a parallel with a 1982 Massachusetts case. They successfully argued the Grendel’s Den case overturning a law delegating government powers to a private individual (a church attempting to prevent award of a liquor license.) The two lawyers argue that the Ku Klux Klan Act of 1871 can be invoked to prevent the illegal delegation of essential government powers.

Tribe and Rosenberg also suggested another remedy: the use of countersuits to confront vigilantes directly for “acting under the color of law.”  They believe that those who are targeted could sue bounty hunters for double and even triple damages.

Garland’s legal action against Texas and the arguments of Tribe and Rosenberg provide some encouragement to those rightfully distressed over threats to constitutional rights. Other avenues will also be explored such as  raising funds to help poor women unable to travel or afford medication, and backing agencies like Planned Parenthood in suing those who try to profit from the Texas law’s unconstitutional provisions. Some of us will need to scrounge up those old protest signs.

Jean Godden
Jean Godden wrote columns first for the Seattle Post-Intelligencer and late for the Seattle Times. In 2002, she quit to run for City Council where she served for 12 years. Since then she published a book of city stories titled “Citizen Jean.” She is now co-host of The Bridge aired on community station KMGP at 101.1 FM. You can email tips and comments to Jean at jgodden@blarg.net.
Previous article
Lessons From Amsterdam: Reclaiming Your City
Next article
Unsafe: A Pioneer Square Restaurateur’s Plea to City Hall: Help!