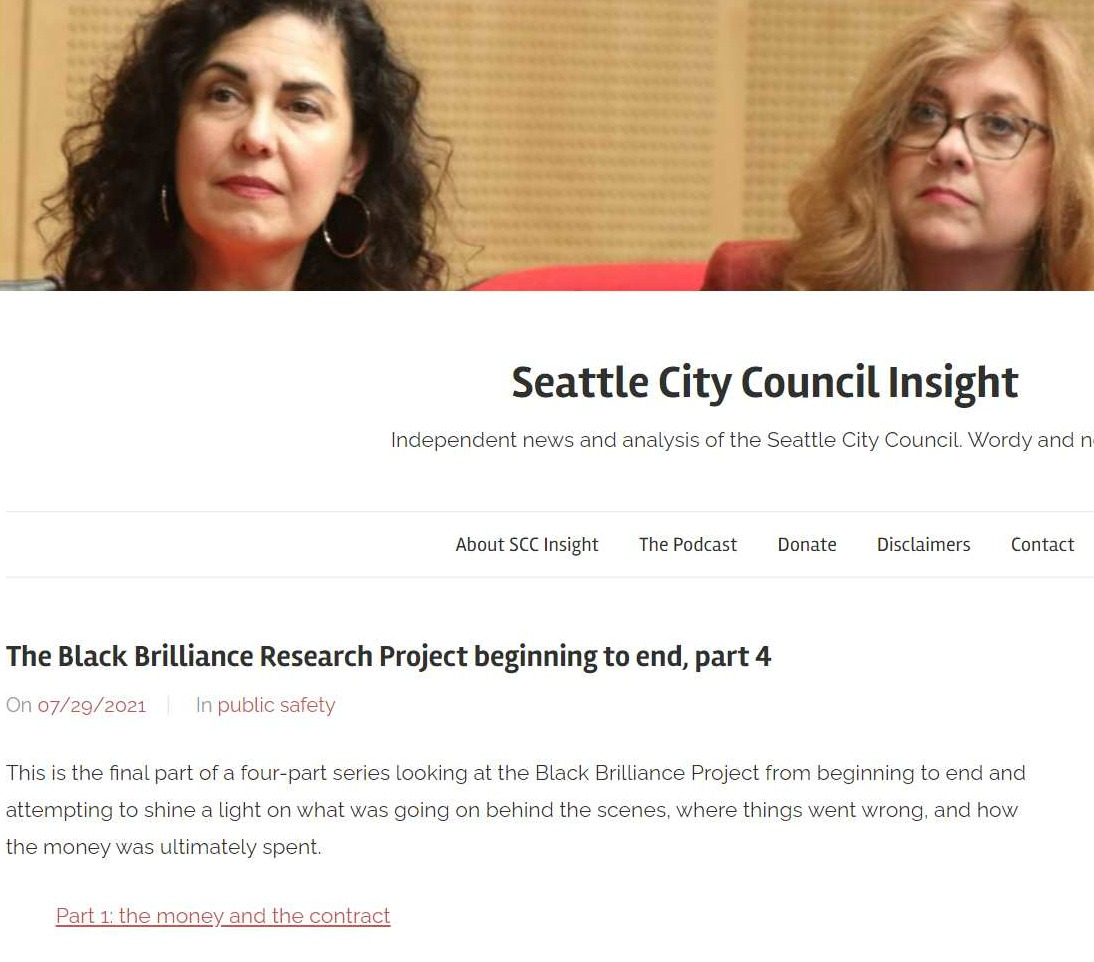 Some Brilliant Journalism about the Black Brilliance Project

If you haven’t read it already, I can’t recommend more highly Seattle City Council Insight writer (and regular Post Alley contributor) Kevin Schofield’s four–part deep dive into the troubled $3 million Black Brilliance Research Project contract awarded by the Seattle City Council last year. It’s a lengthy read, but for anyone interested in how the current incarnation of the Seattle City Council, with its left activist supermajority, operates, it’s well worth the time.

Schofield worked his way through thousands of pages of emails, financial documents, and other public records to piece together a master narrative of how the troubled no-bid contract — intended to explore “the true sources of community safety in Black communities,” and is the basis of the $30 million plus participatory budgeting process initiated by the City Council — came together, and, at times, nearly fell apart.

Schofield did painstaking work in reconstructing the internal dynamics of the Council’s approach to the hastily developed contract, born in the immediate aftermath of the killing of George Floyd and the ensuing protests. The contract approval involved a fair degree of rule bending, unusual procedural moves, questionable decision-making, and clear efforts to conceal a host of problems that swirled around the project. It is really something that merits far greater attention than it has received. That the traditional media has largely punted on providing this sort of oversight (I’m looking at you, Seattle Times) says something not so good about the current state of our local media in Seattle and the depth of their commitment (or lack thereof) to journalistic objectivity and fairness.

Luckily, Kevin Schofield and the invaluable SCC Insight has stepped up to try to fill this void. If you’re interested in Seattle municipal politics, this four–part deep dive is a disquieting must-read.

Sandeep Kaushik
Sandeep Kaushik is a political and public affairs consultant in Seattle. In a previous life, he was a staff writer and political columnist at the Stranger, and did a stint as a Washington State correspondent for Time Magazine and for the Boston Globe, back in the olden days when such positions still existed.
Previous article
Primary takeaways: Vouchers not Votes, Endorsements and Money Dominate
Next article
Democracy on the Edge: What Democrats Need to Do for ’22