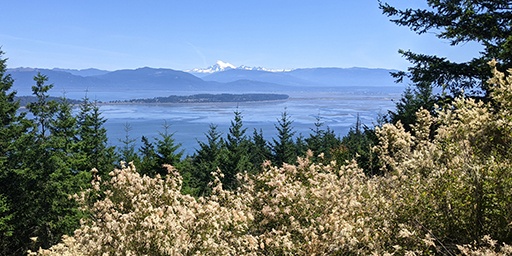 It’s less than a seven-minute ride to another world from the bustling small town of Anacortes aboard the Guemes — a 21-vehicle, 99-passenger, diesel-powered ferry — across the Guemes Channel to Guemes Island. More and more people are making that ride, as permanent or part-time residents, or as vacationers. And all of them need water.

Freshwater access has been an issue for as long as humans have been living on the island. Guemes lacks lakes and year-round streams. It depends on groundwater stored in two natural aquifers, accessed by wells, for fresh water. Continuously increasing water use and, more recently, rising sea levels are compelling individual and governmental responses.

Guemes (GWEE-muhs) Island is part of unincorporated Skagit County and was named Isla de Guemes in honor of the viceroy of Mexico who funded a 1790-91 Spanish exploration of the northwest coast by Francisco Eliza.

At last count, about 800 people resided year-round — along with more than a thousand part-timers and summer visitors — on about eight square miles in a rural setting. Many roads are often reduced to one-way traffic with repairs, there is a heavily eroded south beach. Mountain and forest lands have been preserved with great efforts. One fire station, one cemetery, one store.

For hundreds of years before the arrival of Europeans, Samish tribal members used Guemes, sometimes for fishing and gathering and sometimes as a winter village with cedar longhouses that housed multiple families. The Samish were not assigned their own reservation after the Treaty of Point Elliott in 1855, and many tribal members refused to move to Lummi or other nearby reservations. Bureaucratic errors denied them official tribal status for generations.

One compensation, alongside the many injustices and deprivations stemming from their long exclusion from official tribal status, was that the Samish had less government scrutiny. Potlatches and other traditional observances were forbidden by the U.S. government, but the Samish’s relative invisibility and village sites on remote Guemes enabled them to continue potlatching until 1917, welcoming members of other tribes to this shared cultural tradition.

One Samish longhouse site was near Potlatch Beach. Although it does not show up in contemporary reports, tribal sources indicate there was a natural spring at the site. In 1912, white settlers who wanted to control the water supply forced the Samish residents to leave.

‘Icing and cake’ — and runoff

The island’s freshwater source is complicated both by geology and rising sea levels. “Guemes is a flat, complex layer cake of sand, gravel, and clay deposits left by glaciers that passed over this place 10,000 to 250,000 years ago. The layers alternate — impervious and pervious, icing and cake,” geology professor John Oldow — who grew up in Anacortes and has a home on Guemes Island — wrote in the 1995 U.S. Geological Survey (USGS) report on groundwater on the island.

The rainwater that renews the aquifers, about 22 to 28 inches a year, filters quickly through the thin topsoil and then turns to runoff when it hits the clay, reducing the amount that gets down into the aquifers.

Mount Guemes, the highest point of the island at 688 feet and the only part above sea level of the volcanic basalt that comprises the island’s base, is described on a hiking webpage by one user as “easily done by an 80-year-old grandfather.”

“It’s a pretty special place,” said Patty Rose who with her husband has homes in Seattle and on the island. Not exactly newcomers to island life, they previously lived on Whidbey Island when she taught in Oak Harbor in the 1970s. They were introduced to Guemes by friends who had a place on the island.

After purchasing an existing small cabin with a well in 2006 on North Beach, they added second small living quarters. They got to know the people around them and became more involved in island life. The draws for them still are water views, a beach nearby, and a small garden of flowers and vegetables with an orchard. Rose serves on the Guemes Island Planning Advisory Committee (GIPAC), which advises Skagit County on island goals and concerns.

In the 1990s the Environmental Protection Agency recommended no new wells on the north end due to a collapse of one of the island’s two aquifers, Rose said. According to a GIPAC newsletter, the state Department of Ecology in 1994 advised Skagit County Department of Health to curtail well drilling on the north end of Guemes. Yet, she said, there’s been no enforcement of that recommendation. Permits continue to be issued and homes to be built.

According to the county’s planning department, the drilling of water wells is permitted and overseen by the state and not the county. After the well is drilled, the quantity and the quality of the water to be used comes under county health department rules regarding minimum amount of flow and chloride content due to saltwater intrusion.

Meanwhile, the population continues to grow. An early report noted a population of 100 in 1908. A cemetery, telephone service, and a weekly newspaper arrived soon after that. By 1975, the population was around 289 people.

In 1995, when the last water survey was conducted on Guemes, there were about 500 single-family residences and fewer than 800 year-round residents. The 2011 Guemes Island Sub-Area Plan estimated the population of the island in 2005 to be around 600-800 permanent residents and in the summertime over 2,000 with part-time residents and visitors.

Based on 2005 data, the 2011 plan identified 1,532 parcels of land on the island, of which 627 had homes on them. An updated buildout analysis conducted by the county in 2010 indicated an approximate capacity for around 861 potential new units on the island under current zoning.

Because groundwater is the “primary potable water on the island,” according to the 2010 Skagit County Comprehensive Plan, its protection is “a primary concern.” All potable water on Guemes comes from the 22 to 28 inches of annual rainfall that percolates to the island’s underground aquifers, according to the 1995 USGS study. The Double Bluff aquifer is the main groundwater source at and below sea level, and the Vashon aquifer rests above it in two areas of the island. According to the USGS report, it is not known what percentage of recharge water from rainfall reaches the aquifers; the carrying capacity of the groundwater system also is unknown.

The 1995 study inventory counted 120 wells. In 2020 Steve Orsini, who grew up on the island and returned in 1989, wrote that there were more than 360, at least 64 of which have been compromised. Some of these wells, especially those along the shoreline, have an increased amount of salt in the water pumped, a problem called saltwater intrusion. That happens when more freshwater is being withdrawn from an aquifer than is being replenished.

Like Rose, Orsini is also a member of GIPAC. And like Rose, he has felt the pain of saltwater intrusion in his well water. The shape of the aquifer is like a lens, Orsini said, thinner at the edges where the water in shoreline area is drawn from and allowing more salt water to enter the “lens.” Orsini estimates that pumping that lowers an aquifer by one foot in its center can result in about a 40-foot rise of seawater intrusion on its edges.

Time — and funds — for an update

In the 2019 session of the Washington state legislature, funds were appropriated for an update of the 1995 survey but withheld in 2020 because of the COVID pandemic emergency.

The 2021 legislative session appropriated $80,000 for GIPAC to update the USGS 1995 survey, to “study … the island’s aquifer recharge areas, quantify an updated water budget, and provide an accurate water-level analysis and water-table map of the two aquifers on the island.” The state funding, passed through to the USGS, is a match with USGS funding for a total project cost of $150,000. The study is set to begin in 2022 and estimated to take a year and a half to complete.

With additional water data for the island, Orsini thinks a legal basis would exist for requiring pre-drilling hydrogeological studies and inclusion of water resources in the county’s comprehensive planning. In the meantime, Orsini, Rose and GIPAC will continue advocating that all wells should be reviewed, not just those linked with new building development. Orsini has advocated for Skagit County to require new homebuilders to have a hydrogeology assessment where wells are failing due to seawater intrusion.

This is not to be confused with discussions of “land rights,” Orsini noted. “There is an assumption [by some property owners] that there is a right to the water under the property.”

According to the county’s planning department, residential catchment systems designed for annual rainfall by county-approved engineers have been permitted in the county and on Guemes Island since 2014. The engineered systems are expensive but allowed building permits to be issued in Skagit Valley areas with insufficient groundwater for in-stream flows.

A simpler rainwater catchment design template was presented in 2018 by Western Washington University student intern Joseph Kuljis working with geology professor Robert Mitchell. The county has not approved its use by residential users because the design template has not yet been adopted and fully designed by an engineering company.

On Guemes, Rose and others anticipate the upcoming USGS study as another opportunity for the county to act on the island’s water problems before it is too late. “We have saltwater intrusion in our well so we filter our drinking water,” said Rose. “We also have installed a cistern to collect rainwater for the gardens. A couple of years ago we installed a larger water holding tank in our well house and we have decreased our pumping speed to 1 gallon per minute.”

“I had hoped that the combination of conservation, slower pumping and using rainwater in the garden would improve our water quality, but so far there is not a noticeable difference,” she said. “If we had understood our water situation better when we built our new small house in 2008, we probably should have done rainwater catchment for drinking water even if we weren’t able to get county approval at that time.”

“We hope that an aquifer recharge study will help the county decide that some wells should not be permitted and that rainwater catchment is the best alternative for some islanders,” Rose said.

By 2024, when the new study is complete, there might be answers that prompt some county actions.

For more on water supply in the San Juans: “Have enough water? San Juan prepares to find out, with USGS study,” Salish Current, July 21, 2021. Water Watchers, “a deep dive into the precious resource of fresh water on Lummi Island.”

Elisa Claassen
Elisa Claassen, a journalism graduate from Western Washington University, had great-grandparents who settled in northern Whatcom County over 100 years ago. She freelance writes, has done research for academic and legislative matters, and enjoys the arts and the great outdoors. This article first appeared in Salish Current, a Bellingham-based news website.
Previous article
An Astrid By Any Other Name…
Next article
Siriusly, I’m Trying to Break Up with My Radio!