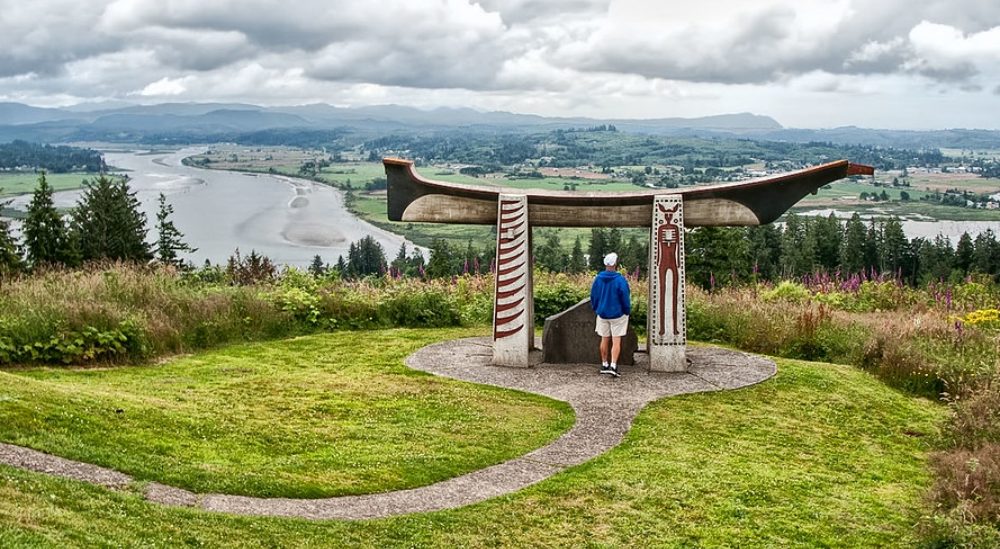 How Astoria Became the Plymouth Rock of the West

On July 22, 1926 a ceremony was held atop Astoria, Oregon’s Coxcomb Hill, 600 feet above sea level.  The sun was hot, but breezes blew from the mouth of the nearby Columbia River.  After climbing the new, narrow road – by foot, automobile, and bicycle – a happy crowd assembled to commemorate the erection of what would be called the Astoria Column.

The new 125-foot-tall column with a cast-iron spiral staircase inside seemed a strange competitor to the small forest of hilltop Douglas fir trees reaching for the sky.  Brave climbers after taking 164 steps appeared on the observation deck and waved to the crowd below.

The event celebrated completion of the cross-country Great Northern Railway and early history of the Oregon Country.  The monument’s design was borrowed from Rome’s Trajan Column which celebrated Emperor Trajan’s military victories. The Astor Column murals saluted 14 significant events in Pacific Northwest history, including Captain Robert Gray’s 1792 “discovery” of the Columbia River (the Natives had been present for 10,000 years), and the 1805-1806 arrival of the Lewis and Clark Expedition.

Built at a cost of $27,134 (close to $500,000 in 2021 dollars), the Great Northern Railway and Vincent Astor, great-grandson of John Jacob Astor, paid the bill.  The local community invited to the ceremony and festivities one of America’s most famous historians, Harvard professor Samuel Eliot Morison.

Morison’s talk focused on comparisons between New England and the Pacific Northwest (once dubbed “New Albion”). Nodding to local historians, Morison reminded the audience that cranberry bogs, fishing, hunting, and birding are shared by New Englanders and Pacific Northwesterners.  Next, he compared the two great oceans that nurture trade, weather patterns, fishery resources, and histories of (mostly) European exploration.

Morison dusted off the term “Nova (or New) Albion,” once applied to our Pacific Northwest.  In historical writings New Albion is associated with the area north of Mexico claimed by Sir Francis Drake for England in 1579.  Drake’s ship “Golden Hind” put in at several West Coast locations, either sacking Spanish or Native communities or engaging in modest trade.  No certainty prevails about Drake’s exact landings, but Point Reyes, California is usually accepted as one of his ports-of-call.  The most northerly landfall could have been Cape Arago, just south of today’s Coos Bay, Oregon.

The name “Albion” was applied by Drake to our Pacific shores because he thought the white banks and cliffs of Oregon and California resembled those found along the southern English coastline.  Also “Albion” was occasionally used as an archaic name for Great Britain.  Morison saw Drake’s voyage as the first English assertion of sovereignty on the North American Pacific Coast.

Further describing the differences between New Albion and New England, Morison stated: “The West was the frontier of civilization; the East has become the frontier of democracy.”  (The statement somewhat stood on its head a famous historian’s frontier thesis, by which democracy’s seedbed was the wide open Western frontier.) Looking over waters of the great Columbia River Morison rhapsodized: “Astoria might well be called the Plymouth Rock of the West — for the opening up of the Oregon country is a close parallel, almost a reproduction of the process by which the Thirteen Colonies were founded by England.”

“Peace to the dust of conquerors –
Peace to all who slept at the trail-ends
Unrest, unrest, to all who come hereafter!
Unrest to the new pathfinder.”

The Astoria Column remains an unrivalled viewpoint of the Columbia River mouth, much of the Oregon and Washington Pacific shoreline, and several peaks in the Coastal Range.  It’s also a pivotal story on the white settlement of the Northwest. After the arrivals of adventurers, government representatives, explorers, fur traders and investors, Astoria’s “founding” was enriched and spread by Native, Scandinavian, and Asian fishers, fish processors, farmers, ship builders and entrepreneurs from everywhere.

The name “Astoria” was taken from New York fur trader John Jacob Astor who sent the first commercial party to the Columbia River mouth, where he hoped to see the building of a Pacific Coast version of New York City.  His workers built Fort Astoria in 1811, but it was sold in 1813 to the British rival in the fur trade, the North West Company. Astor himself never saw Astoria, the Great River, or the Pacific Ocean.

Junius Rochester
Junius Rochester, whose family has shaped the city for many generations, is an award-winning Northwest historian and author of numerous books about Seattle and other places.
Previous article
What Should Social Media Companies Have to Disclose About Political Ads?
Next article
Beyond Comfort: The Impacts of Air Conditioning