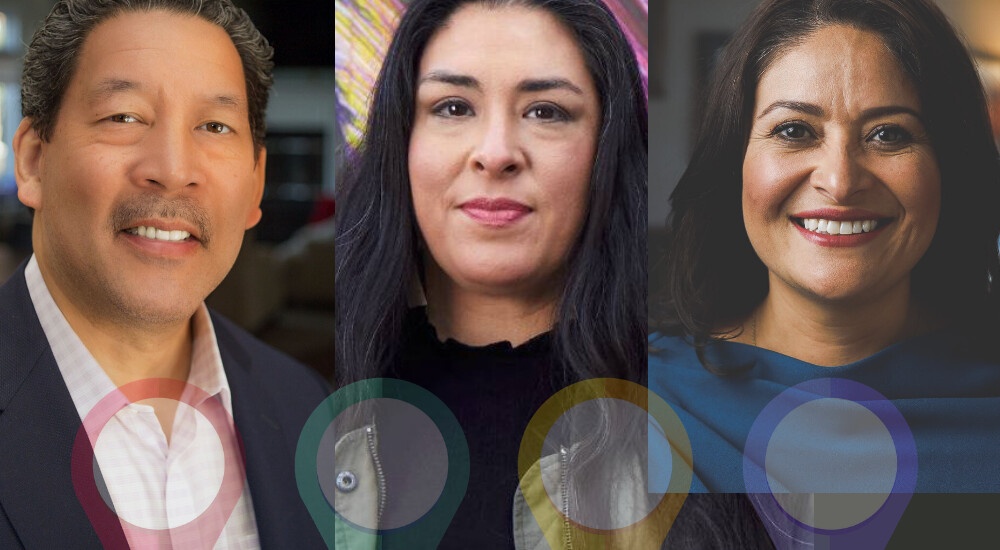 A poll in the field this week shows former Seattle City Council President Bruce Harrell off to a strong lead in the race for Seattle Mayor, with Colleen Echohawk gaining on Lorena Gonzalez for the second spot on the Emerald City’s November ballot.

The survey of 617 likely voters by Change Research, sponsored by the Northwest Progressive Institute (NPI), found Harrell in first place with 20 percent, followed by Gonzalez at 12 percent and Echohawk at 10 percent.  Ex-State Rep. Jessyn Farrell comes in at 6 percent, along with architect Andrew Grant Houston.  None of the 9 remaining candidates topped five percent. A third of those surveyed remain undecided.

“The biggest divide that we saw among groups of voters in the survey was generational: Older voters are more supportive of candidates like Bruce Harrell and (City Attorney) Pete Holmes, while younger voters are gravitating to candidates like (City Council hopeful) Nikkita Oliver and Lorena Gonzalez,” said Andrew Villeneuve, executive director of Northwest Progressive Institute.

In years past, Washington held its state and local primaries in September after Labor Day. Voters tuned out politics in mid-summer, to the point where an annual “Hacks and Flacks” party was staged so campaign managers could at least talk to each other.  The new poll suggests, however, that voters will be mailing in ballots for the August 3 primary.

Not that they are tuned in.  “If there’s a common theme that runs through all of our election findings, it’s probably that Seattlites are enthusiastic about voting this summer, but for the most part are not sure who they are supporting yet,” said Villeneuve.

Fifty-three percent of those surveyed are “Not sure” in the contest for Seattle City Attorney. It’s reason to worry for three-term incumbent Pete Holmes, reelected in 2017 with 74 percent of the vote. He scores only 16 percent in NPI’s poll, followed by challengers Ann Davison and Nicole Thomas-Kennedy at 14 percent each.

A police overseer before he captured the city’s top legal post, Holmes faces a challenge from both ends of the political spectrum. Davison, who has been endorsed by the Seattle Times and ran and lost for City Council two years ago, became a touted recruit to the Republican Party but failed to make the finals running statewide for Lieutenant Governor in 2020. Thomas-Kennedy, endorsed by The Stranger, and an outspoken police critic, has worked as a public defender and, according to her voter pamphlet statement, a “Bartender and server.”

Undecideds total a whopping 55 percent in the contest for Seattle’s at-large District 8 Council seat.  Incumbent Teresa Mosqueda, heavily backed by labor, is safely ahead at 26 percent.  Trailing far behind at 6 percent is frequent (and contentious) candidate Kate Martin. Voters rejected, by a four-to-one margin, a Martin-sponsored plan to leave part of the Alaskan Way Viaduct standing.

Attorney-poet-activist Nikkita Oliver leads with 26 percent for District 9, the other at-large seat.  Second at 11 percent is Sara Nelson, co-founder and owner of Fremont Brewing. Trailing at 6 percent is Brianna Thomas, chief of staff to Gonzalez at the City Council. The three candidates have split labor union endorsements. Oliver benefits from a high profile, having run for mayor four years ago.

The mayor’s race has produced surprises.  As when she ran in 2017, Jessyn Farrell has impressed independent observers with her legislative record and in-depth knowledge of city issues.  In New York City, former city commissioner Kathryn Garcia surged on a platform of managerial competence, almost catching Eric Adams for the Democratic mayor nomination. But Garcia was boosted by endorsements from the New York Times and Daily News.  Farrell has watched the Seattle Times favor business-backed candidates (Jenny Durkan and Harrell) and The Stranger head for left field (Cary Moon and Gonzalez).

Echohawk is a first-time candidate but has worked successfully as executive director of the Chief Seattle Club, which serves Seattle’s homeless native community. It is one outfit that has walked its talk on affordable housing. She has also served on the Community Police Commission, which fought to block the city’s controversial labor agreement with the Seattle Police Officers Guild.

The campaign has featured anecdotes demonstrating Seattle’s left-leaning political spectrum. In a Friday email fundraising blast for Gonzalez, U.S. Rep. Pramila Jayapal warned: “A big business PAC is ready to spend over $200,000 in this race, and we need the resources to get Lorena’s message out.”

But a big labor PAC is already in the field boosting Gonzalez. UNITE/HERE and the United Food & Commercial Workers have formed Essential Workers for Lorena and raised more than $450,000. They’ve spent $150,000 on TV ads and shelled out $110,500 for “20,345 pounds of 1 oz. dried cherry packets for a mailer (Chuker Cherries). The TV spot shows a truck with cherries driving around Seattle, with the message that Gonzalez picked cherries as a girl.

The record of Seattle’s left-activist City Council, particularly cutting the police budget and undercutting Seattle Police Chief Carmen Best, is likely to be a major election issue. Harrell was Council president for a few days after Murray resigned but decided – then – to retire from politics in 2019. Gonzalez has served as president during controversial Council actions of the past year.

One other question of note was about the Compassion Seattle proposal. The poll shows 61 percent support it, 23 percent opposed, with 16 percent undecided.

The poll of Seattle voters has a margin of error of plus or minus 4.3 percent.

Northwest Progressive Institute plans to have Change Research back in the field this fall and is planning an upcoming survey of political attitudes in Pierce County.  In a city/region where suspect polls come from candidates and advocates, NPI has produced spot-on predictions on races for President, Governor and statewide office.

NPI has its origins boosting transit and spent more than a decade flagging the suspect finances of initiative booster Tim Eyman.  Its complaint about finances of a 2012 Eyman initiative led to a Public Disclosure Commission probe of Eyman, which led to Attorney General Bob Ferguson’s civil suit.

Joel Connelly
I worked for Seattle Post-Intelligencer from 1973 until it ceased print publication in 2009, and SeattlePI.com from 2009 to 6/30/2020. During that time, I wrote about 9 presidential races, 11 Canadian and British Columbia elections‎, four doomed WPPSS nuclear plants, six Washington wilderness battles, creation of two national Monuments (Hanford Reach and San Juan Islands), a 104 million acre Alaska Lands Act, plus the Columbia Gorge National Scenic Area.
Previous article
Stranger and Stranger: Behind Seattle’s Only Newspaper’s Endorsements
Next article
When I Swam with Juan Peron at the “Hotel of the Dictators”