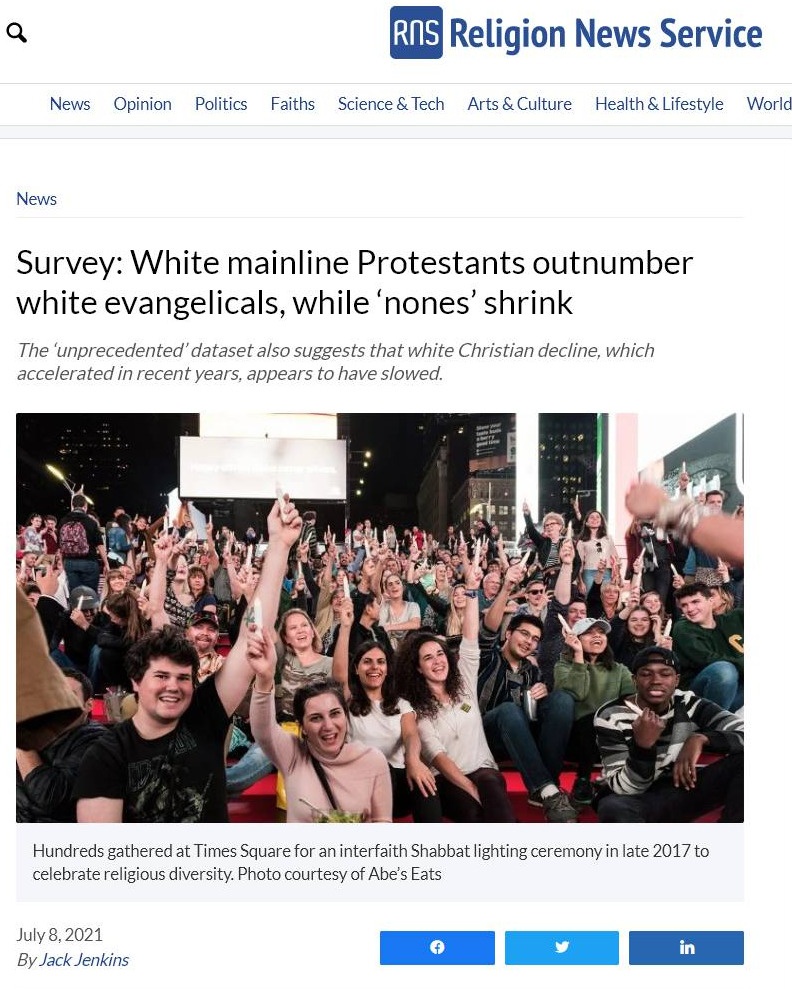 The Religious New Service reported recently that mainline Protestants now outnumber Evangelicals as a percent of the U.S. population. Last week, Michelle Goldberg of The New York Times gave details of a new survey by the Public Religion Research Institute: “On Thursday, P.R.R.I. released startling new polling data showing just how much ground the religious right has lost. P.R.R.I.’s 2020 Census of American Religion, based on a survey of nearly half a million people, shows a precipitous decline in the share of the population identifying as white evangelical, from 23 percent in 2006 to 14.5 percent last year.”

This is a pretty shocking reversal of long-standing trends and conventional wisdom. Ever since Dean Kelly published Why Conservative Churches Are Growing in 1974, the assumption has been church growth was the province of conservative and Evangelical churches and denominations.

This newest finding, and others, were reported in the 2020 Census of American Religion conducted by the Public Religion Research Institute. Here’s some of the most pertinent data. Mainline Protestants are up to 16.4% of the U.S. population after a low of 13% in 2016. Evangelicals have dropped from 23% of the population in 2006 to 14.5% in 2020.  Moreover, and this is really interesting, the median age of Evangelicals is 56, while the Mainline median age is 50. Who knew? The youngest religious group in America — Muslims at a median age of 33.

So what are we to make of all this? Probably not as much as some of us would like. Heralding a “rebirth” of mainline Protestantism would be premature. What does seem clear is that the Evangelical world is roiling. Chickens are coming home to roost, specifically, (mixed metaphor alert) the way that Evangelicals lashed themselves to the Trump mast. Whether left or right, religious groups that get too close to one political party or movement may ride the wave for a while. But that wave seems inevitably to break. Especially when people begin to think their religious leaders are much more interested in power than other things like, say, justice or mercy or God.

Most Americans understand that religion has political implications. But that doesn’t mean they want their church to endorse a party or a candidate, and in so doing to ostracize those who don’t toe the line. Beginning with George W. Bush’s candidacy in 2000 Evangelical/ conservative churches and many of their most visible leaders allied themselves so closely with the GOP that there was little light between the two. For many, though not all, evangelicals that embrace only tightened with Donald Trump.

Beyond that, evangelicalism has been troubled by issues ranging from sexual abuse and racism in their history and their present. The Southern Baptist Convention, the nation’s largest denomination and evangelical group, has become as conflicted as the United Methodists, which takes some doing. Membership in the SBC is falling precipitously. High profile Baptist leaders like Beth Moore, a very popular Bible teacher, and Russell Moore, one-time leader of the SBC Ethics Commission (the two are not to my knowledge related), have left the SBC or positions within it.

Younger evangelicals seem less on board with their elders when it comes to issues of gender roles and LGBT inclusion, which may explain the rise in the median age of Evangelicals.

I always like it when conventional wisdom gets a comeuppance, and here it has!

Anthony B. Robinsonhttps://www.anthonybrobinson.com/
Tony is a writer, teacher, speaker and ordained minister (United Church of Christ). He served as Senior Minister of Seattle’s Plymouth Congregational Church for fourteen years. His newest book is Useful Wisdom: Letters to Young (and not so young) Ministers. He divides his time between Seattle and a cabin in Wallowa County of northeastern Oregon. If you’d like to know more or receive his regular blogs in your email, go to his site listed above to sign-up.
Previous article
Reclaiming Idaho: Bringing People into the Political Process
Next article
Repairing Italy: A Glorious Football Win