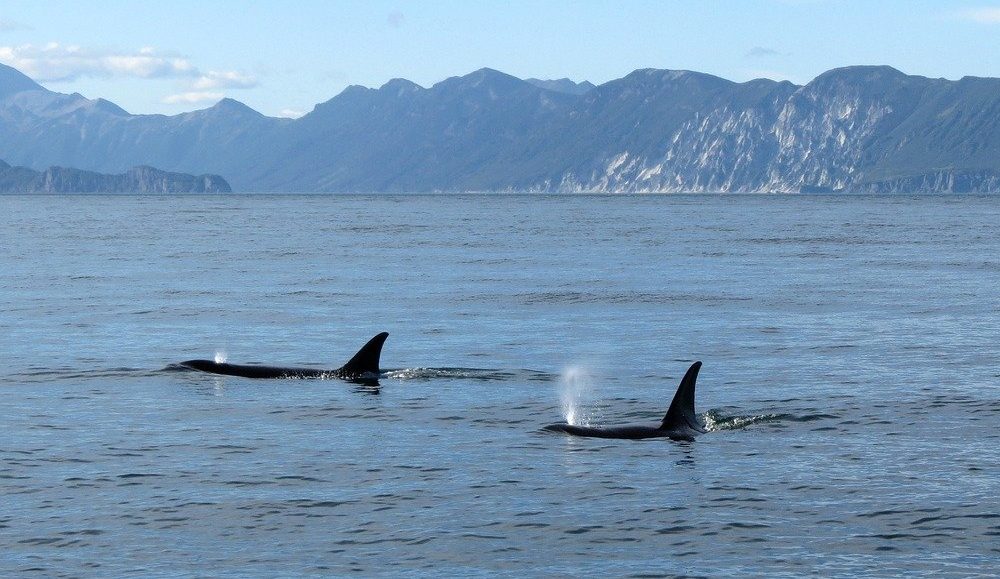 “The People That Live Under the Sea”: Lynda Mapes Chronicles the Orcas

“Orca” is rooted in the saga of Tahlequah, the Orca whale who carried her dead calf across waters of the Salish Sea. Mapes takes us through the family lives, hunting waters, and habitat of the J, K, and L pods that make up our southern resident population of killer whales.  And she explains why the population is in peril. The book is laid out with lucid illustrations and maps by Emily Eng, and photography by the Seattle Times’ Steve Ringman.

Joe Gaydos, scientist with the SeaDoc Society, travels with Mapes through the San Juan Islands, speaking of some scientists’ hesitancy about anthropomorphism, or inappropriately attributing human characteristics to the behavior of non-human animals.  Mapes shows no similar hesitancy in making such comparisons, entitling her chapter on the behavior of killer whales: “The People That Live Under the Sea.” She writes, “The southern resident Orcas have what humans call culture: learned behavior, passed on inter-generationally, including language, ceremonies, hunting and gathering skills, usual and accustomed gathering and hunting spots, and distinct food preferences.”

Of the Orcas, populations found hunting in ocean waters from the Arctic to the Southern Ocean, she adds:  “They have one of the largest brains of any mammal other than humans – and some of the areas of their brains are larger and more complex than our own, particularly the parts that support empathy and social interaction.  When people say to me, ‘They are just like us,’ the first thing that flashes through my mind is, don’t flatter yourself.”

Love for the whales causes Mapes, lead environmental writer with The Seattle Times, to ceaselessly recycle the message: We bad.  She decries hydroelectric projects, from Shasta Dam on the Sacramento River to four Army Corps of Engineers Dams on the lower Snake River, which have decimated chinook salmon, the southern residents’ prime food source both in Puget Sound and at the mouth of the Columbia River.

Other targets: Container and passenger ships whose noise hampers the Orcas’ detection of prey; industry that puts toxics and petroleum products into waters; urbanization which has filled in wetlands; and wild creatures such as seals and sea lions, protected under the Marine Mammal Protection Act, which compete with killer whales for salmon.

The book has one unblemished set of heroes, Native Americans – particularly the Lummi Indians of Whatcom County – who merit comparison to the Orcas. “The human and Orca cultures of the Salish Sea have shared these waters for thousands of years,” Mapes writes. “And like Lummi and other Coast Salish communities, the southern resident Orca families share customs, culture, language, a deep knowledge of the water, and food. Just as in Coast Salish communities the role of the matriarch is also crucial in Orca families.”

A very old National Geographic book, read when I was a kid, depicted killer whales as vicious and a threat to both man and sea mammals.  They were once shot. As a feared predator, they became a sought-after attraction for aquariums. Between 1962 and 1976, about 270 killer whales were captured – most famously Namu – in Pacific Northwest waters. Orcas live long lives but only one southern resident – dubbed Lolita by her defenders – has remained alive in captivity.

Mapes hunts down and interviews an unrepentant Ted Griffin, captor of Namu.  Unfortunately a little stingy in crediting other media, she does not mention the whale captors who tried to run down a skiff carrying KING-TV reporter Don McGaffin.  The saga culminates with the capture in 1976 by SeaWorld of six killer whales in Budd Inlet, as horrified Olympia residents looked on.

“Orca” mints other heroes in this SeaWorld saga, which ended the whale hunt in our waters.  Future Secretary of State Ralph Munro is credited with turning capture into a major news story, with the GOP duo of Dan Evans and Slade Gorton bringing pressure on SeaWorld.  Three of the captured Orcas escaped, a fourth was let go, and two were later released.

Mapes’s media net is too narrow, since the capture was made into national news by reporter Mike Layton of the Seattle Post Intelligencer, scooping Mapes’s employer. Intervention by powerful Sen. Warren Magnuson, then chairing the Senate Appropriations Committee, made SeaWorld take notice. I received a call at the time from a Maggie colleague, ex-Senator and presidential candidate Eugene McCarthy. Clean Gene was by then a director of Harcourt Brace & Jovanovich, owner of SeaWorld. On behalf of worried directors, he wanted to know exactly what Magnuson was up to.

Mapes evokes sympathy for Lolita, confined for 50 years to a small tank at Seaquarium in Florida.  At sea, the southern residents travel as far as 70 miles a day in search of food. They live as a family. In Mapes’s words, “Their deep, lung-purging exhalations trigger an intuitive kinship. Orcas are not fish. They are mammals, like us. And like us, they have lively minds and emotional needs.”

The southern residents’ neighbors, the northern resident population of killer whales, are flourishing.  That population enjoys a wild habitat, Johnstone Strait between northern Vancouver Island and the British Columbia mainland.  The strait is a major inbound migration route for salmon runs of the mighty, undammed Fraser River. The British Columbia government, in a rare early act of enlightenment, created the Robson Bight Ecological Reserve, protecting a Vancouver Island bay where the northern residents give themselves a message by rubbing pebbles on the beach. Northern residents are readily producing calves, ten born in 2017 and eight more in 2018.

Orcas of Johnstone Strait are flourishing, but threats loom.  Due to climate change, Fraser River waters warm so much at times as to threaten salmon populations.  A major mine disaster in 2014 sent tailings into Quesnel Lake.  Just north of Johnstone Strait, salmon farming has spread disease to populations of wild fish. The nearby Tsitika River, home to five species of salmon, has seen major landslides in clear cut slopes.

Mapes identifies such threats to marine life as storm water pollution and PCBs left over in habitat like the Duwamish. She should put a finger at specific villains. The tripling of Canada’s Trans-Mountain pipeline threatens Haro Strait and the Strait of Juan de Fuca with a sevenfold increase in oil tanker traffic.  Both straits are major whale feeding grounds. Gov. Jay Inslee and B.C. Premier John Horgan oppose the pipeline, but the Canadian government plows ahead with construction.

While the southern resident population declines, masters of the Columbia River – agribusiness, the Bonneville Power Administration, and Eastern Washington politicians – have fought a protracted campaign against removal or modification of Snake River dams. A few years, Republican consultants proposed an “Astroturf” (phony grass roots) outfit labeled Northwesterners for More Fish. Its objective was to build support for extinction of Snake River salmon runs in exchange for dumping more hatchery fish into the Columbia.

The scheme died when news leaked out, thanks to an angler partner in what is now the K & L Gates law firm. Sponsoring power interests were embarrassed when a poll they commissioned revealed broad regional support for restoring salmon.  Mapes writes lovingly of one major stream restoration project, removal of two fish destroying dams from the Elwha River, master stream of the Olympic Peninsula, and the subject of an earlier book by Mapes.

All of which is to say that the situation is not hopeless.  Mapes may go a little overboard in arguing that we and the killer whales are alike.  She can lionize and airbrush our Native Americans.  Nonetheless, hear her out: “The home of the southern resident Orcas and the salmon is our home, too. And when they thrive, so will we. Perhaps, then, there is a very simple test to determine – if we do the work of restoring and protecting the waters and lands needed by Orcas and salmon – whether we are getting somewhere.”

How do we get there? By “stepping back and making space for species other than our own,” contends Mapes.  Such is a challenge the Pacific Northwest will grapple with for generations to come, along with confronting the climate crisis so all species may survive.

An endnote:  A tip of the hoodie to The Seattle Times for setting loose and supporting Mapes in her work on “Orca” as well as Elwha River restoration.  Major projects, commitment of time, reporter-photographer collaboration – the essence of public service in journalism — have been curtailed in many places. Lynda Mapes flourishes.  Credit, too, to Braided River of the Mountaineers for publishing such a thorough and well-illustrated book.