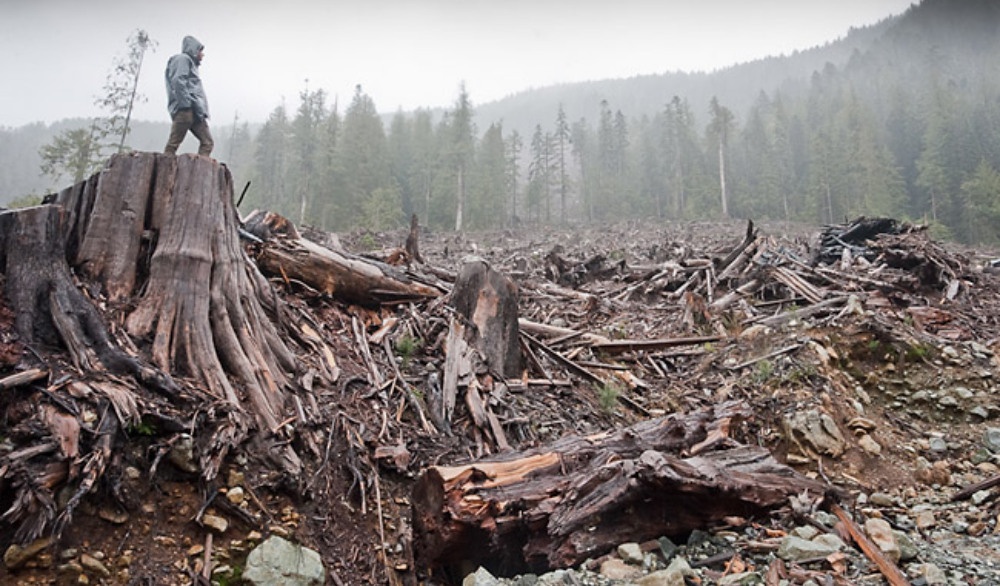 The Tongass National Forest, which encompasses most of Southeast Alaska, is America’s last great primeval rain forest. It is the country’s largest national forest, a land that bespeaks bigness and abundance. Its spruce trees reach eight feet in diameter. The density of brown bears on Admiralty Island reaches one per square mile. Humpback whales breach in the waters of Icy Strait, and salmon runs fill its rivers in late summer.

A half-century of battles over its old growth forests has seen values collide in unforgettable places.  My favorite is the estuary of the Kadashan River on eastern Chichagof Island, across an inlet from the small town of Tenakee Springs.  Clear-cuts and logging roads have approached it from both sides. With its overriding goal to “get the cut out,” the U.S. Forest Service wanted to harvest high grade trees in the Kadashan.  “Smokey Bear” was thwarted by the 130 or so activist folk who live in Tenakee Springs, and by scientist-researchers who refused to yield to pressure from federal land managers and the Alaska Congressional delegation.

A biologist named John Schoen, whose love of nature was spawned by boyhood on Orcas Island, has written a memoir called Tongass Odyssey (University of Alaska Press, $28.95).  It gives engrossing accounts of tagging brown bears to study their range and exploring why Sitka black tail deer do not prosper in dense stands of second growth forest. Of the river valley across from Tanakee Springs, he writes: “I estimated that the Kadashan watershed ranked number two for coho and pink salmon habitat and number three for chum salmon habitat out of 83 watersheds within the eastern portion of Chichagof Island.  Kadashan also ranked number one in this province for brown bear habitat.”

The Kadashan was eventually protected.  If it would have been logged, the U.S. taxpayer would have received a return of four cents for every dollar spent to “get the cut out.”  Such was the corporate welfare designed to pull 450 million board feet out of the Tongass each year and keep big Ketchikan and Sitka pulp mills in operation.

The mills are long closed, but the battle is not ended.  Cheered on by the Alaska delegation, the Trump Administration last year rescinded, in the Tongass, the Carter-era “Roadless Rule” which blocked construction of new roads into unlogged national forest land. The move was designed to open 186,000 acres of old growth forest to commercial logging.

The target of chainsaws would seem small in a 16-million-acre national forest.  As explained by Shoen, however, “Approximately 4 percent of the Tongass (635,000 acres) consists of high-volume old-growth stands with over 30,000 board feet of timber per acre. These stands, commonly found at low elevations and along broad valley bottoms, are high-quality habitat for certain wildlife species (and) they are also commercially important timberland.”

The temperate rainforests of North America are mostly gone. We still do have sample valleys such as the Hoh and Bogachiel in Olympic National Park. The Carmanah Valley on Vancouver Island’s west coast was slated to be clear-cut until Canada’s tallest trees were discovered by a young cartographer-photographer named Randy Stoltmann.

If you want a sense of the immensity of the cut, take a Seattle-to-Juneau flight, which passes over vast swaths of logged-over land on Vancouver Island followed by 300,000 acres of cuts on Prince of Wales Island, largest in Southeast Alaska.  British Columbia continues to log old growth, although one big cut has lately been disrupted by sit-ins at Fairy Creek in the home riding (electoral district) of B.C. Premier John Horgan.

During the battle leading up to the 1980 Alaska National Interest Conservation Act (ANILCA), I made a reporting trip to Ketchikan, Juneau and Sitka.  If planted stands of second growth forest are uniform, so was conversation at a dinner in Ketchikan. U.S. Forest Service nabobs, pulp mill brass, and leaders of a lobby group called Citizens for Management of Alaska Lands vied to complete each other’s sentences.  Their message: Logging is good for wildlife.

With his initial field research on Sitka black tail deer, Schoen found otherwise. “In every comparison, deer use was higher in the old growth, ranging from two to thirty times higher than young regrowth.” Why? “There was no understory (deer food) in the dense conifer stands and very little deer signs except for occasional travel lanes.”

Likewise, logging and road building disrupted the lives of brown bears.  (Thankfully, most of Admiralty Island was made a national monument.) But the Forest Service refused to take science for an answer.  Schoen relates going on an aerial tour with a visiting congressman. The flyover itinerary avoided areas of intensive logging.  Commanding the one microphone with a headset, a Forest Service official claimed clear-cuts and wildlife conservation could coexist.

The aerial tour ended with a flyover of glaciers, and a quip by California Rep. George Miller: “Yes, there is not much clear cutting on the Juneau Icefield, is there?” He was on target. We’ve protected lots of land in the “Lower 48” and Alaska, including every single glacier in the state of Washington. But boundaries were drawn to exclude low-elevation, valley-bottom forests. Only in the Olympics, thanks to a 1937 tour by Franklin D. Roosevelt – he was appalled by the clear-cuts – did we get boundaries drawn to include ancient forests in a great national park.

The Forest Service has given ground grudgingly. When ANILCA designated 6 million acres of wilderness in the Tongass, there was a monumental sop to the timber industry.  Congress prescribed an annual cut of 450 million board feet for 10 years and set aside off-budget $40 million a year to lay out and build logging roads.  Lawmakers repealed the whopping subsidy in 1990 when they passed the Tongass Timber Reform Act, putting another million acres of the national forest off-limits to logging.

Schoen does not airbrush another unsightly development.  Given legal standing by the 1971 Alaska Native Claims Settlement Act, native corporations claimed choice stands of old growth forest. Much of it is no longer standing. Cruise ship passengers, stopping at Hoonah, see a backdrop of cuts that can be appreciated only by connoisseurs of ugliness.  Over the last 25 years, writes Schoen, “timber harvest on native lands has generally exceeded Forest Service timber harvest.”

Rep. Don Young, R-Alaska, has long demanded “sound science” in land use decisions.  Well, the evidence is in on the economic and ecological value of uncut forests as a source of carbon sequestration and habitat for salmon, brown bears and Sita black tail deer.  And, with as little as 5-10 percent of our original forests still intact, old growth has become an endangered ecosystem.

So, to the Biden Administration: restore the Roadless Rule.  Ask why the Tongas should be the only national forest in America that is still clearcutting old growth. Heed research forester Tara Barrett, “The Tongass National Forest stores massive amounts of forest carbon, more than any other national forest in the United States. “

John Schoen gets the last word after more than 40 years spent as a biologist for the state of Alaska, and later scientist with the National Audubon Society: “The clearcutting of old growth is an archaic and unsustainable timber practice.”

Joel Connelly
I worked for Seattle Post-Intelligencer from 1973 until it ceased print publication in 2009, and SeattlePI.com from 2009 to 6/30/2020. During that time, I wrote about 9 presidential races, 11 Canadian and British Columbia elections‎, four doomed WPPSS nuclear plants, six Washington wilderness battles, creation of two national Monuments (Hanford Reach and San Juan Islands), a 104 million acre Alaska Lands Act, plus the Columbia Gorge National Scenic Area.
Previous article
Amy Klobuchar: Why we need new Anti-Monopoly Laws (and to enforce them)
Next article
Data say the Tokyo Olympics should be canceled. They won’t be.