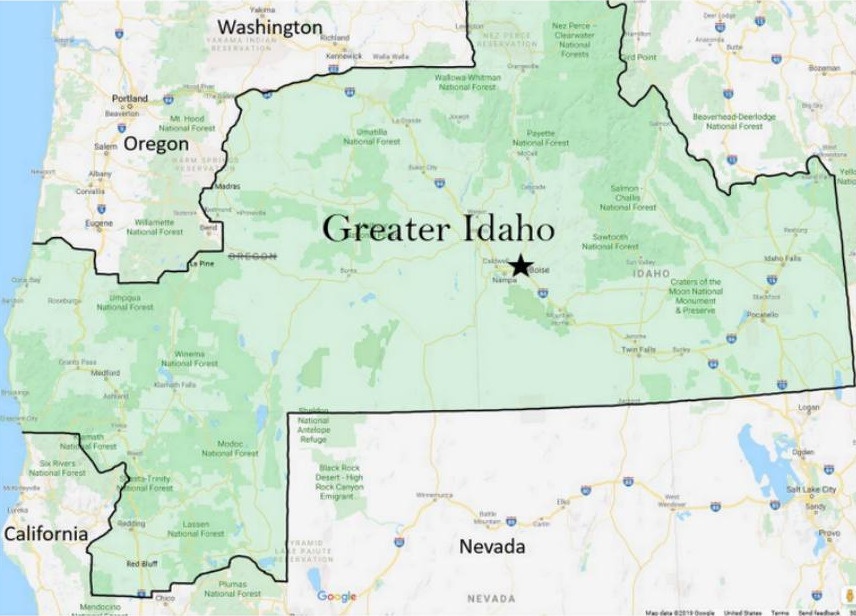 It is a classic “yes . .  . but” story. Yes, five counties in eastern Oregon gave resounding majorities in Tuesday’s election to proposals that direct county commissioners to meet and consider relocation of the Idaho border (emphasis mine).  Last November, two other counties voted in like manner, and county officials are already holding public hearings.

This is a serious voice for rural voters in Eastern Oregon, but it is far from a rebellion, let alone a likely rejiggering of the map. Approval of the legislatures in Idaho and Oregon would be required, and Congress would also need to assent. Don’t rip up your OSU Beavers jersey in favor of an Idaho Vandals shirt, dad, ain’t happening very soon.

The math goes like this: Oregon has 4,289,440 people in 36 counties. The five voting on Tuesday (Baker, Grant, Lake, Malheur, Sherman) total 64,015 people, and the two counties voting last November (Jefferson, Union), add 52,777. All together, that’s only 2.7 percent of Oregonians. Every one of the “secessionist” counties voted for Donald Trump in 2020, some by nearly 80 percent. Tuesday’s vote showed percentages that closely reflected Trump’s vote in November. He lost the state by 16 percentage points, but carried nearly all of rural Oregon.

Meanwhile, Trump carried Idaho by 31 percentage points. You get the drift here, and, yes, Idaho politicians are pleased to take on borders. “This election proves that rural Oregon wants out of Oregon,” Mike McCarter, president of Citizens for Greater Idaho, said in a news release. “If we’re allowed to vote for which government officials we want, we should be allowed to vote for which government we want as well,” he said in a statement Wednesday. “If Oregon really believes in liberal values such as self-determination, the legislature won’t hold our counties captive against our will.” Consider the opportunities: perhaps a swap of Boise, which is edging toward Blue, with Grants Pass, which is not.

Sponsors of the “Greater Idaho” movement also want to expand into Southern Oregon, which is conservative but not to the same extent as their eastern brethren. An attempt was made in 2020 in Douglas County (Roseburg), where the timber economy was ravaged in the last decade, but it gained only 43 percent support. For an Oregon county to join Idaho, its border would need to be contiguous to Idaho or an expanded Idaho, and only Douglas could open a Pacific Ocean port for Idaho, albeit a small port at Reedsport.

This desperate cry has been coming for some time in parts of the state that lack economic stability, population growth, educated young people, and diversity of everything from crops to climate to people. For the century since statehood in 1859, Republicans — reflecting the values of rural and small-town Oregon — ruled or shared Oregon’s political, economic and social leadership. Even as the state became more progressive in mid-century, liberal Republicans such as Tom McCall, Mark Hatfield, Clay Myers, and Norma Paulus, held top offices to wide acclaim.

The last person to hold that standing was Victor Atiyeh, governor from 1979 to 1987. More conservative than the aforementioned, he was widely respected. Paulus tried to succeed him, but failed in a close election to Democrat Neil Goldschmidt (1987-91), and Oregon has not elected a Republican governor — or many others at the state level — since then. The Oregon Republican Party has moved sharply to the Trumpist right, even more so than many of its rural voters.

Republicans fared badly in state legislative voting, and are likely to do even worse in new redistricting; the 2020 census will not boost Republican hopes. The current Oregon Legislature has Democratic super-majorities (60 percent) in both houses. In 2019 and 2020, Republicans brought the Legislature to a halt with walkouts and other delaying tactics.

All of this points to a dreary landscape for Republican rural areas, and Tuesday’s voting amounts to a cry of anguish more than a call to rebellion. These areas have simply lost the political clout they once had, and their representatives are more pugnacious and confrontational than Republican leaders of my time covering Oregon politics (1964-86). At least two GOP legislators are in legal trouble for aiding and abetting protestors who staged an armed intervention of the Capitol in recent months.

While the GOP has moved to the right, Oregon Democrats have marched left, particularly in Portland and Eugene. The violence and interminable protests in Portland in recent months have given the state a national blemish and elicited fear and loathing in many rural and suburban households.

Oregon has a governance crisis, directly related to becoming a one-party state. The history of single-party domination is often that of drifting to the fringes of left or right. Oregon is no exception. Democratic Gov. Kate Brown is widely disliked in rural areas; she is generally seen as the typical Portland liberal. Both of her immediate predecessors, John Kitzhaber and Ted Kulongoski, had roots in south-central Oregon and were centrist Democrats who knew how to win votes in rural and small-town districts.

Under Brown and super-majority legislatures, Oregon has adopted some of the most liberal legislation in the nation — in several cases with majority approval by the voters. In the 2020 general election, voters handily approved ambitious campaign-finance reform and the nation’s first legal use of psilocybin (magic mushrooms) in therapy.  Oregon also became the first state to decriminalize hard drugs. Both drug measures drew heavy contributions from national drug-liberalization organizations, overwhelming local opposition efforts.

All of these trends serve to widen the yawning chasm that separates urban Oregon from its country cousins, to the point where; finally, it has led to the cousins looking for Idaho kin who vote for lower taxes, abortion controls, relaxed gun laws, and Donald Trump.

Yes . . . But. Do the relatively small number of people who vote on measures such as this — a special election, advisory and nonbinding, a somewhat esoteric subject — do they really mirror what their neighbors are thinking? Perhaps not.

Some of the most sophisticated polling on issues of this sort in recent years has been done by the Portland firm of DHM Research, often in conjunction with the Oregon Values and Beliefs Center, a nonprofit that seeks to promote unity in the state. Both are nonpartisan. Results from surveys conducted from December through May indicate that, yes there is disenchantment with Oregon’s government and politics. This disaffection resonates in all parts of the society and is only marginally greater in what DHM terms “rest of the state” — in contrast to Tri-County (Portland area), and the Willamette Valley.

On many social issues, the Valley and rural areas were quite close. The major divergence from this pattern is on homeless issues, rated very important by both Portland and Valley, but less critical by rural and small-town Oregon. But rural respondents rated climate change, fires and forest management higher than the other groups, and they tended to be more concerned about “irresponsible government” and wanted more rural or Republican legislators. But the number of respondents interested in these topics was quite small.

Responses to DHM questions revealed that all three sections of Oregon (Portland, the Valley, rural Oregon) had high hopes that local leadership and values could help heal the political rift in the state. Although it was clear that rural respondents favored conservative media, and local officials more than state officials, these gaps have always prevailed in Oregon politics, and seem no greater than in supposedly halcyon days of yore.

There remains a lingering feeling that things are not great in the state. In an attempt to probe this amorphous topic, DHM asked, “All things considered, do you think Oregon is headed in the right direction or is it off on the wrong track?” The “right direction” was picked by 42 percent urban, 44 percent Valley and 40 percent rural. The “wrong track” totaled 52 percent urban, 49 percent Valley and 56 percent rural.

There was another, intriguing question: “Does the current political environment make you irritated or angry?” Portland area 70 percent “yes,” Valley 70 percent “yes,” Rural 71 percent “yes.”  So, it appears that at least in political terms, Oregon is all screwed up, regardless of where you live.

Floyd McKay
Floyd J. McKay, emeritus professor of journalism at Western Washington University, covered Pacific Northwest politics as a reporter and opinion writer for four decades, primarily in Oregon. He was commentator/news analyst at KGW-TV (King Broadcasting) from 1970 to 1987. Previously a print reporter, he returned to print and online reporting and commentary from 2004 to 2017 with the Seattle Times Op-ed page and Crosscut.com. He is the author of Reporting the Oregon Story: How Activists and Visionaries Transformed a State (Oregon State University Press, 2016). He lives in Bellingham.
Previous article
A GOP Splinter Surfaces, but can a Rogue Rump Rumble?
Next article
Pitching In: Building Tiny Homes