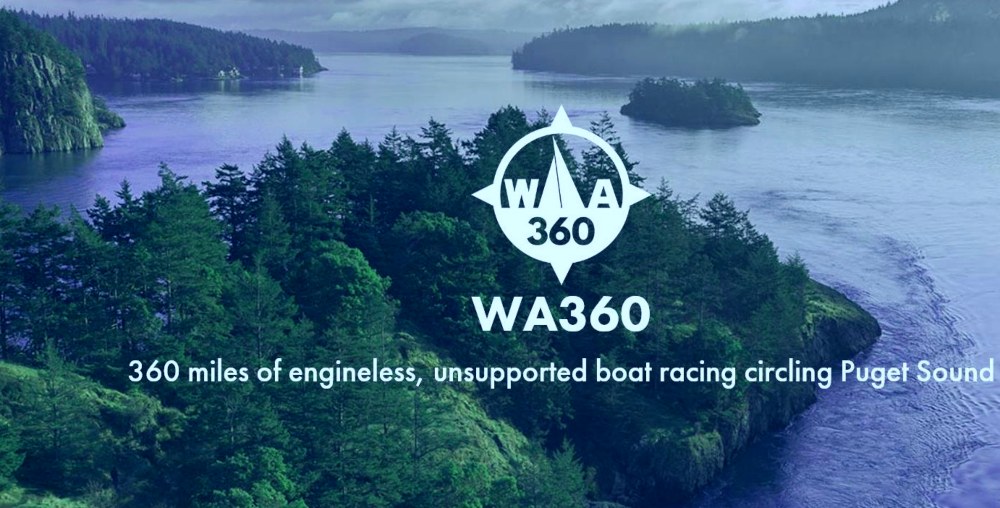 Try this for a business plan:  Invite people to pay $550 each to enter a race that requires them to row, paddle or sail a small boat for 360 miles – from Port Townsend to Olympia, then north to the Canada border and back to PT.  No engines, no support, and no prize money.

Who comes up with an idea like that?  And what makes them think it could possibly work?

Answer:  The Northwest Maritime Center, and they think it will work because the race is still four months from now and they already have some 30 takers.

Christened the WA360, or “Washington three-sixty,” the Maritime Center’s planned race will, at least for now, replace the celebrated 750-mile Race to Alaska, which seemed even less likely to succeed, but did anyway for five years from 2015 to 2019.

Like the R2AK, the WA360 will be subject to few rules, the main one being – no engines.   The course covers half the distance and will take place entirely in Washington State waters, thereby averting Canada’s aversion to Covid-ridden Americans.

“Once we realized we would have to cancel the R2AK, we started thinking about a race where we could decide our own fate,” says Daniel Evans, the Maritime Center “race boss,” who planned and managed  the center’s previous races.

He attributes the WA360 idea to Jeanne Goussev, the Bainbridge sailor and skipper of “Sail Like a Girl,” which won the 2019 R2AK.

“As it became clearer that the chances for an R2AK weren’t good, we started looking for something else,” Goussev says. “To do nothing at all would be devastating.”

The idea is to “circumnavigate” Washington’s Salish Sea, Goussev explains. “Same spirit as the R2AK, but right in our own back yard, a race that would go right past Alki Beach and Everett and Whidbey…”

If all goes as planned, the WA360 will start June 7 on the Port Townsend waterfront, then proceed south to Olympia, back north past Seattle and Everett, through Deception Pass or the Swinomish Channel (racer’s choice) to Bellingham and as far as Point Roberts, the odd American peninsula south of Vancouver.  Then the course turns back south past the San Juans and to the PT finish line.

“We spent a lot of time figuring out how to expose everyone to the toughest challenges in Washington,”  Evans says.   They include the treacherous tidal currents of the Tacoma Narrows and Deception Pass, the exposed seas of Georgia Strait and the Strait of Juan de Fuca, and the becalmed fjords of South Puget Sound. Some of those passages will favor sails, but others want to be rowed or paddled.

Evans is contacting yacht clubs and potential sponsors along the route, inviting them to adopt individual racers, deliver hot meals or other goodies.

Despite the maritime challenges, the WA360 promises to be somewhat less risky than the R2AK.   Each year, Canadian officials addressed the Alaska racers, delivering stern warnings of the hazards along the Inside Passage, emphasizing that rescue possibilities diminish rapidly in Northern British Columbia waters.

Another difference is the prize.   The R2AK offered the winner a $10,000 prize, which allegedly was nailed to a tree near the Ketchikan finish line.  The second prize was, more famously, a “set of steak knives.”

But it would be hard for the Maritime Center to offer a cash prize when it, like other nonprofits, has laid off staff and is struggling to maintain its education and cultural programs.   So the WA360 prize will be “a big-ass belt”, like a heavyweight prize fighter’s, Evans says.  And the winner will only keep it for a year until the next race.

Not a problem, Goussev says.   Ocean racing has never been about the prize money. “When we won (in 2019) we kept a little to pay some expenses, but we donated most of it for breast cancer research.  I would have preferred a steak knife.”

Ocean racing is about less tangible, but more important rewards, she says. “Saltwater heals everything.  It forces us to push our bodies and our boats, to find out what we’re really capable of.  It’s humbling, but it’s also a great teacher.”

Those lessons have been at the core of the R2AK and the Seventy-48, the Maritime Center’s human-powered race (no engines and no sails) from Tacoma to Port Townsend.  Well over 100 teams have signed up for that race which, if all goes as planned, will precede the WA360 this year. Some boaters plan to enter both races, back-to-back, Evans says.

As of last week, the Maritime Center had received 30 applications for the new race – mostly from Washington but others from as far away as Colorado and California.  The list includes Goussev and her Sail Like a Girl crew.

“I hope this race can help break through the noise of the past year,” she says.  “I hope families in Seattle or Bainbridge or Whidbey will be able to go down to the beach and watch people racing against the elements.  We all need some of this spirit of adventure and positivity.”

Ross Andersonhttps://rainshadownorthwest.com/
Ross Anderson is a founding member of the Rainshadow Journal collective. He retired to Port Townsend after 30 years of journalism at the Seattle Times.
Previous article
Rare Unanimity: Katherine Chi Tai Clears the Senate
Next article
How to Hand-Publish a Book: A Women’s Writers’ Group Bonds