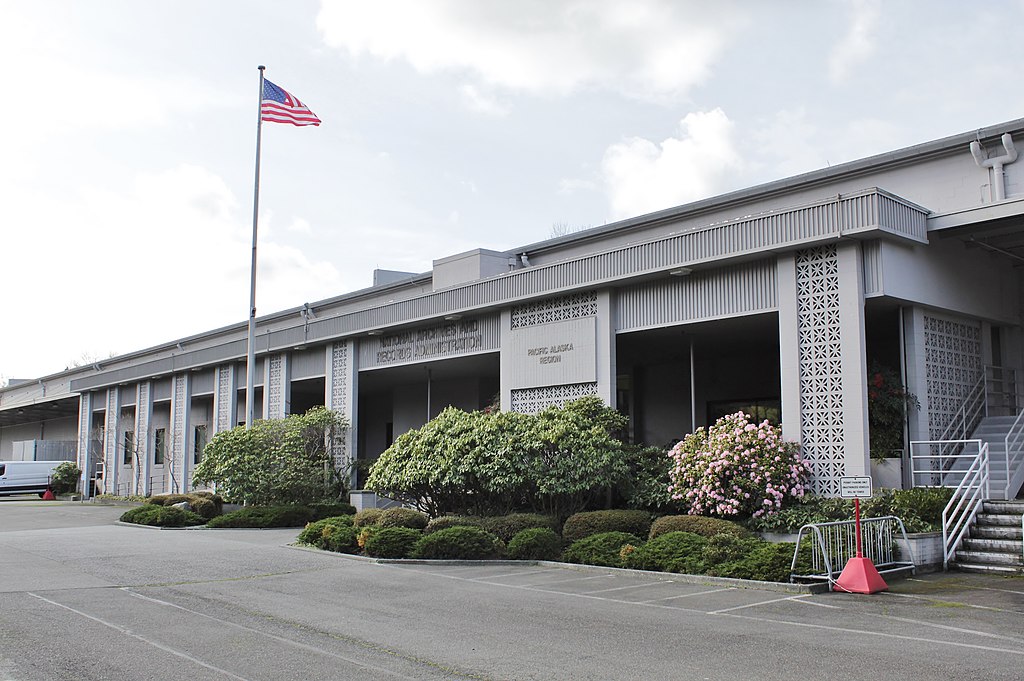 Washington state Attorney General Bob Ferguson tells about how his late dad Murray Ferguson spent a lot of his free time (when he wasn’t working for Boeing or helping raise his seven kids) doing research at the National Archives and Records Administration (NARA), that block-long gray building in Northeast Seattle off Sandpoint Way. Bob Ferguson says his dad, an avid student of Seattle history and architecture, would simply be “outraged” if he knew what might be happening to those precious and handy national archives.

Murray Ferguson wouldn’t have been alone in his outrage. In January, more than 300 signed up to speak at a remote public meeting hosted by the state attorney general’s office. The speakers had been invited to voice their opinion of the federal government’s plan to sell Seattle’s National Archives Building and ship nearly 1 million boxes of original records thousands of miles away.

With only one or two exceptions, all the Zoomed-in speakers were strongly opposed to the government plans. No small part of their outrage concerned the way the decision to sell the archives was reached. An obscure federal agency, the Public Building Reform Board (PBRB), did not hold legally required meetings in the Pacific Northwest. Nor did the agency consult with state, local, or tribal leaders in the region.

That agency’s decision to sell the building was approved by the Office of Management and Budget (OMB), a last gasp effort of the Trump Administration. OMB also green-lighted the board’s recommendation to remove the archival records and send them to facilities more than a thousand miles distant in Kansas City, Mo., and Riverside, Calif.

What we’re talking about here is an endangered treasure trove, 180-years of historical records from four Northwest states — Washington, Oregon, Idaho, and Alaska. The collection includes military, land, court, tax, census and naturalization records. Among the records are original treaty documents relating to the 272 recognized tribes in the region. There also are case files — 50,000 of them — from the Chinese Exclusion Art, documenting Chinese who entered through Northwest ports from 1882-1943.

Those who spoke at Ferguson’s remote public hearing illuminated reasons why removal of the records would do incalculable harm. Among the speakers was Seattle City Councilmember Deborah Juarez who is registered with the Blackfeet Nation. She said the city of Seattle is joining Attorney General Ferguson’s suit to block the sale of the building. She added, “Our history lives here. Let’s keep it here.”

Rhonda Farrar talked about how the archive’s records have helped so many learn about the members of their family who arrived during the Chinese Exclusion Act. She referenced the thrill of those accessing the entry records. She can recall more than one second-generation searcher saying, “I can finally see dad.” She pleaded that the government not be allowed to “move resources from under us.”

Ron Rosen testified remotely from Wallace, Idaho. He explained that a small town like Wallace,  although a couple of hundred miles distant, depends heavily on the archive’s priceless records and what they reveal about regional history. Liz McClure, a retired Seattle Times editor, spoke of the value of the archive to journalists. She said, “Moving these files makes no sense, there is no national rationale. These files are needed for scientific research.”

As did dozens of others, Ann Bates stressed the value of the archives to Northwest tribes such as the Makah.  Her story was echoed many times by members from local tribes. They talked about discovering aunts, uncles, and cousins they hadn’t known existed. Carl Wasillie spoke from Alaska of the need for archival information on the colonization of the Arctic.

Julie Stein, executive director of the Burke Museum, contributed her plea to keeping federal records readily available. She said, “We share the belief that the records must remain here.” She had strong support from other speakers including Beth Takekawa, director of the Wing Luke Museum.

Lake Forest Park resident Dr. Thomas Bird, who serves on the University of Washington                 School of Medicine faculty, explained how important the archive’s genetic records are to the scientists who are studying Alzheimer’s Disease.

Researcher Mary Fern cited crucial reasons for keeping the federal archives nearby. She discounted arguments that records could be made available online, pointing out that currently only half of one percent of records have been digitalized. Any effort to do so would take an immense amount of time and money and, in the process, the records would lose context. Further she pointed out that moving the facility thousands of miles away would discourage individuals who might otherwise donate materials to the archives.

Ingrida Gray, who works at the Seattle Genealogy Society across the street from NARA, testified how valuable the archive’s resources have been. Along with other speakers, she told of the importance of the expert help provided by NARA’s experienced staff, a resource that would likely be forfeited in a move.

An ad hoc army of historians, genealogists, scientists, academics, and native Americans told a convincing two-hour story. A number of speakers said that, even if the 75-year-old facility should eventually be sold, it is essential to keep the treasure trove of records intact and available nearby. Many repeated in their own words what Councilmember Juarez had stressed: “Our history lives here.” The overwhelming majority agreed: That history must stay here.

Attorney General Ferguson’s office recorded public comments from the remote public meeting and is forwarding them to the PBRB. His office has already filed four lawsuits seeking access to public records about that board’s decision. Judge Robert Lasnik of the U. S. District Court for the Western District of Washington will preside over the four cases. Bob Ferguson has filed a motion for summary judgment. The Attorney General’s dad, Murray Ferguson, would have been proud.

Jean Godden
Jean Godden wrote columns first for the Seattle Post-Intelligencer and late for the Seattle Times. In 2002, she quit to run for City Council where she served for 12 years. Since then she published a book of city stories titled “Citizen Jean.” She is now co-host of The Bridge aired on community station KMGP at 101.1 FM. You can email tips and comments to Jean at jgodden@blarg.net.
Previous article
Ice Dam flood? We Can Top That!
Next article
Different Times: Prayer, Fellowship Across a Partisan Divide