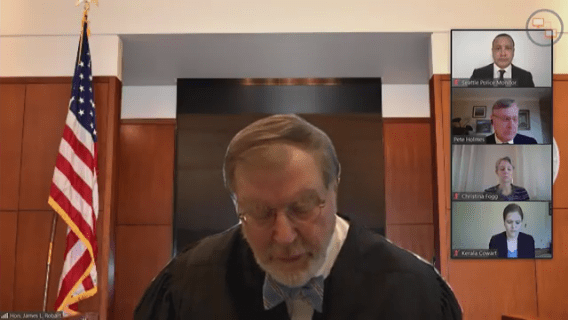 Warning From the Bench: Judge Robart speaks out

Last week U.S. District Court Judge James Robart, who oversees the 2012 consent decree to correct SPD’s biased policing, scheduled an online hearing with the City of Seattle and the Department of Justice for this afternoon. Nominally it was a chance for the newly-appointed police monitor to talk about his work plan for the year, assembled in close collaboration with SPD and the DOJ. That part all went smoothly, and Robart seemed satisfied.

Then it became clear why Robart really called the hearing: when it comes to what’s going on in Seattle these days, he has thoughts. And when you’re a judge, you can compel an audience.

Robart began by reminding everyone what his role is in Seattle’s ongoing mud-wrestling match over police reform:

“My goal is to focus attention on the SPD, but more to focus on compliance with the consent decree. The role of the court is not to tell the city or the police department what to do. I don’t have that authority; it’s vested in city government. The role that I do have is to ensure that the actions of the Seattle Police Department are in accordance with constitutional principles and also with the best interest of the population of the Seattle area.”

Robart then went on to point out why the current political environment makes this is particularly challenging moment to try to push through substantive changes to policing: a Mayor not seeking re-election, leaving no clear indication of how the next Mayor will approach police reform; two City Council seats also up for election; an expired contract with SPOG, the police officers’ union (for which Robart has no love); a pandemic. And he had some particularly choice words regarding the recent revolving door of police chiefs:

“We have an Interim chief at a time when we desperately don’t need an interim chief. Harking back to the arrival of Chief O’Toole, we had someone who embraced the principles of reform and brought the department into a reform mind. Interim chiefs can do as much as they possibly can, but they will always carry something around their neck, which is the title ‘interim’. And it’s the decision of the city that they’re not going to be doing a search for a new chief until a new Mayor and a new City Council are in place. So that creates a situation that is rife with difficulty.”

He then threw in some praise for the still-relatively-young Office of Police Accountability and Office of the Inspector General, both of which have been hard at work since early last summer investigating SPD’s at-times violent response to protests. But then he turned his attention to the Seattle City Council, and the gloves came off:

“I have some rather harsh words for the City Council over the last six months or so. I think they have lost sight of the fact that the 100 paragraphs in the consent decree are not 100 paragraphs. They are not even commitments. They are obligations, orders from this court of things that will be done. And when they decide to take matters into their own hands in contravention of the Consent Decree, then they drag me into a situation that I don’t want to be in, which is telling them, ‘no, you can’t do that.'”

Robart raked the Council over the coals for announcing its intent to defund SPD by 50% with commensurate headcount and salary cuts, “without talking to the police and ignorant to the consequences,” and then feigning shock when Chief Carmen Best resigned in response.

He closed by firing a not-so-subtle warning shot regarding the actions that the Council is currently contemplating:  rewriting its ordinance banning SPD’s use of crowd-control weapons independently of SPD’s own effort to revise its crowd-control and use-of-force policies; and moving forward with further reductions to SPD this year, starting with a $5.4 million budget cut as soon as next week:

“You have a lot of leeway in where you go, but you can’t simply charge off in a direction without knowing what the consequences are, and having in place plans to replace essential services currently being provided by the police. If you do that, then you start to violate provisions in the court’s consent decree. So I see this as a collaborative effort. I’m pleased to hear the reports that were given today. I’m sure we will get further comments from various stakeholders, some of whom choose not to participate actively in this process. There are a lot of fronts that have been opened in terms of areas of activity. Let’s simply make sure that we are all moving in one common direction, and not fracturing into a whole series of everyone running off in their own lane, catering to whatever the wish of the hour is, as opposed to a plan that makes sense for the long term.”

Just as relations seem to be warming between the Council and the Mayor, it appears that they are getting frosty with the judicial branch. Even if Mayor Durkan eases back on her attempts to rein in the Council’s more impulsive tendencies, Judge Robart is sending a clear signal that he’ll be watching the Council’s every move — at least when it comes to SPD.

Kevin Schofieldhttp://sccinsight.com
Kevin is a city hall reporter and the founder of SCC Insight, a web site focused on providing independent news and analysis of the Seattle City Council and Seattle City Hall in general. In a previous life, he worked for 26 years in the tech industry in a variety of positions but most notably as the COO of the research division at Microsoft. Kevin volunteers at the Woodland Park Zoo, where he is also on the Board of Directors. He is also the Vice Chair of the Board of Trustees of Harvey Mudd College.
Previous article
Stage Right: A Primary Challenger to Congressman Dan Newhouse
Next article
Wintery Dispatches from Nez Perce Country