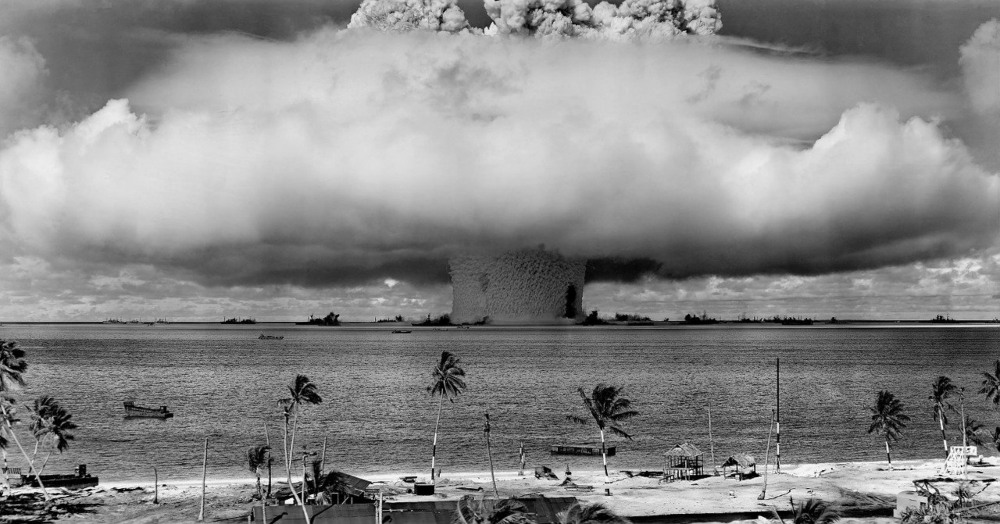 Can Biden Derail the Nuclear Arms Race that Trump Re-started?

Former President Donald Trump had placed the United States on the runway to take off on another nuclear arms race. Trump threw out two treaties that held Russia and the U.S. in check. Those treaties also deterred other nations from developing nuclear weapons over the last 30 years.

President Joseph Biden has cut the throttle by agreeing to a five-year extension with Russia on the two nations’ remaining nuclear arms treaty, agreeing on the New SALT Treaty. But that single act is not enough to keep the U.S., Russia, and other countries from flying off to seek security in possessing nuclear weapons. There must be a plan.

A quick review of the Trump administration’s actions is in order. On August 2, 2019, the United States formally withdrew from the Intermediate-Range Nuclear Forces (INF) Treaty. It required the United States and the Soviet Union to verifiably eliminate all ground-launched ballistic and cruise missiles with ranges between 500 and 5,500 kilometers. With these range restrictions, missiles from Russia’s furthest western and eastern boundaries could not reach the lower 48 states or Hawaii.

The 32-year-old treaty initiated an intrusive inspection regime, including on-site inspections, to maintain compliance. Over the past decade, the United States and Russia have charged the other country with not complying with the INF Treaty. Trump decided to “terminate” the agreement, accusing the Russians again of noncompliance. As a non-sequitur, Trump also said he had concerns about China’s missiles. China is not part of the INF treaty; that concern could have been dealt with separately.

In May of this year, Trump said he was also pulling out of the 30-year-old Treaty on Open Skies. That treaty has reduced the chances of an accidental war between Russia and the United States by allowing reconnaissance flights over the two countries. Once again, Trump accused Russia of not complying with the treaty. In this instance, he added that “there’s a very good chance we’ll have a new agreement or do something to put that agreement back together.” The national security adviser, Robert C. O’Brien, issued a statement saying that the Trump administration would try to reach a new arms-control agreement with Russia and China. However, Trump characteristically left office without putting anything on the table to show the Russians or the Chinese.

President George W. Bush started to walk away from nuclear-arms treaties before Trump. In 2001, he withdrew the U.S. from the 1972 Anti-Ballistic Missile Treaty (ABM) with Russia. Bush sought to build a massive missile defense system.

Ironically, three former Republican presidents successfully negotiated the three nuclear-arms treaties that Trump and George W. Bush dumped: President Nixon on the ABM, President Reagan on the INF, and George H. W. Bush on the Open Skies. However, since President George W. Bush, most Republicans in Congress have not shown interest in avoiding a nuclear-arms race. The passage of the New START (Strategic Arms Reduction Treaty) under President Obama in April 2010 is a perfect example. While the Senate approved it by 71 to 26, over two-thirds of the Republicans voted against it. Even so, the current START pact, which Biden would extend, has been endorsed by six former secretaries of State who worked in Republican administrations and by past presidents from both parties.

On his first full month as president, Trump criticized the New START treaty as a “one-sided deal” and a “bad deal.” That position was undermined by an aggregate data report published by his State Department, which may have been removed from the website where it was to be posted. That report showed that the treaty was working and that both countries kept their strategic nuclear arsenals within the treaty’s limits.

Last year Trump said he was trying to negotiate a shorter extension for New START than the five-year option built into the treaty to be approved by both countries. Russia’s legislative body, the Duma, has approved the five-year extension. Meanwhile, Trump had failed to do so because he tried to include China in the treaty, as he had tried to do in the Open Skies Treaty. China refused, and Trump’s envoy wasted months trying to change their mind. Biden’s team has kept their eye on the ball, focusing on Russia, not China.  Biden officials have said that Moscow’s arsenal “is at least ten times the size of China’s.”

Biden’s approval of the extension does not need the Senate’s approval. But if the treaty is amended, it could be considered a new treaty subject to a two-thirds vote for Senate approval. That approval would not have happened unless the new treaty dramatically conformed to any conditions the Republicans demanded.

Biden’s decision to extend New START avoided real consequences that Trump would have invited by scuttling the last strategic nuclear arms treaty with Russia. First, it would have allowed both countries to deploy an unlimited number of nuclear-armed submarines, bombers, and missiles. Second, by significantly growing our nuclear arsenal, federal funds could be diverted from rebuilding our crumbling infrastructure. Third, scuttling the treaty would have encouraged non-nuclear weaponized nations to begin to develop them. The Washington Post reported that American military leaders recognize this danger and supported the New Start Treaty.

But those dangerous trends remain real possibilities. Biden must publicize them enough to build support for promoting a national campaign to reduce the chance of a nuclear war. That may be the only way to overcome congressional Republican’s reluctance to negotiate any arms agreements.

With more than 10,000 nuclear warheads on Earth, avoiding nuclear war is an issue recognized by the international community. U.N. Secretary-General Antonio Guterres videotaped a message saying, “Nuclear weapons pose growing dangers, and the world needs urgent action to ensure their elimination and prevent the catastrophic human and environmental consequences any use would cause.”

To that end, the first-ever treaty to ban nuclear weapons entered into force on January 22, President Joe Biden’s first day in office. The U.N. General Assembly initially approved The Treaty on the Prohibition of Nuclear Weapons in July 2017. But it did not become adopted as international law until 50 countries ratified it, and as of today, there are now 62. Officially it bans nuclear weapons. However, none of the nine countries known or believed to possess nuclear weapons — the United States, Russia, Britain, China, France, India, Pakistan, North Korea, and Israel — support it. Neither does the 30-nation NATO alliance support it.

This treaty has good intentions, but without any authority to enforce it, a replay of what happened after World War I is certain. At President Wilson’s insistence, the League of Nations’ creation was codified as part I of the Versailles Treaty ending the war. The League was a “general association of nations established to afford mutual guarantees of political independence and territorial integrity of all nations…” Even with those guarantees, the U.S. Senate refused to have the U.S. join it. If it had, nations belonging to the League would still have ignored its disarmament objectives since they were based entirely upon “goodwill.” There was no enforcement mechanism. Such is the case with the current treaty prohibiting nuclear weapons.

However, one existing successful treaty does not have an enforcement mechanism and is a multinational agreement. The treaty on the Non-Proliferation of Nuclear Weapons (NPT) went into force in 1970. Fully 191 nations are party to the treaty, including five who have nuclear-weapons. What keeps it going is that there is a review of the treaty’s operation every five years. Its basic bargain is that the non-nuclear states would not develop the bomb in exchange for the existing nuclear weapons states reducing and ultimately eliminating their arsenals. As a result, Michael O’Hanlon, the Director of Research at Brookings Institute, states that current nuclear arsenals are only about one-fifth the size of what they were a half-century ago.

The danger now is that our current political climate is moving away from reaching compromises, which creates an unstable environment and contributes to the spreading of nuclear weapons. Trump’s removing the U.S. from the INF treaty and the Iran Treaty, known as the Joint Comprehensive Plan of Action (JCPOA), has contributed to this condition.

Robert Einhorn, a Senior Fellow in Brookings’ Foreign Policy Division, believes that not only are the NPT’s disarmament goals at risk but now there are fears that the number of nuclear-armed states could increase. Einhorn believes that if the U.S. does not return to JCPOA, Iran will consider leaving the Non-Proliferation Treaty. In response, the Saudi crown prince says his Kingdom will acquire nuclear weapons if Iran does. Then we have President Recep Tayyip Erdoğan asking why other countries’ have nuclear weapons and Turkey has none.

Biden must avoid weakening existing treaties, which could lead to a free-for-all race to build nuclear weapons. He needs to reassert the U.S.’s role as a leader in negotiating new nuclear-arms treaties. Four presidents successfully played that role, Nixon, Reagan, H.W. Bush, and Obama. Our last president just walked away from that leadership role. Biden has the opportunity to make once again the U.S. the voice of reason in reaching complicated treaties.

The first step to grabbing the world’s attention would be to re-engage with other nations in making the Iranian treaty work better for everyone. If we remain on the sidelines, skirmishes between countries could lead to multiple nations seeking to possess nuclear weapons. Without treaties, those conflicts could trigger nuclear wars. We are not an island. We will suffer if there is any use of nuclear weapons. The cost of lives to us will be many times greater than what we endured with the covid pandemic.

Nick Licata
Nick Licata, was a 5 term Seattle City Councilmember, named progressive municipal official of the year by The Nation, and is founding board chair of Local Progress, a national network of 1,000 progressive municipal officials. Author of Becoming a Citizen Activist. http://www.becomingacitizenactivist.org/changemakers/ Subscribe to Licata’s newsletter Urban Politics http://www.becomingacitizenactivist.org/
Previous article
Safety First: Why We’re so Preoccupied with it Now
Next article
Is Social Media a Threat to the First Amendment?