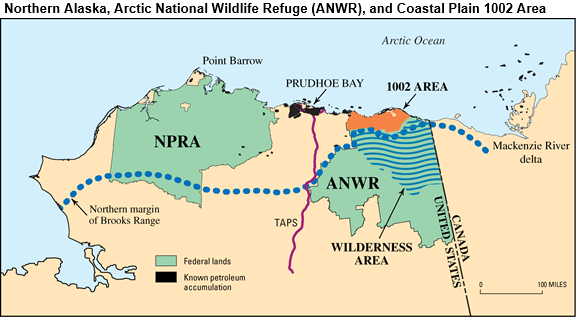 That Was Fast: Biden Voids Giveaway of Arctic Wildlife Leases

The Arctic National Wildlife Refuge gets almost no sunlight at this time of year, but the past 24 hours has meant the difference between darkness and dawn in federal government policy toward the 19-million-acre wildland on Alaska’s North Slope.

The Trump Administration, acting at the 11th hour and 59th minute, on Tuesday announced it had finalized oil and gas leases for 437,804 acres on the Coastal Plain of the Refuge.  In places like the Canning River, its western boundary, the future promised haul roads, drilling platforms, pipelines, and 50-gallon drums.

On Wednesday afternoon, as one of his first executive orders, the just-inaugurated President Biden directed the U.S. Department of Interior to place a “temporary moratorium on all oil and natural gas leasing activities in the Arctic National Wildlife Refuge.” Foes of drilling, upset on Tuesday, were all smiles on Inauguration Day.  “Our goal of course is to see the Refuge leases canceled, which could come from later administrative action or in the context of our litigation against the validity of the Record of Decision,”  Adam Kolton of the Alaska Wilderness League said in a memo to the group’s leaders.

The North Slope of Alaska has been an environmental battleground for 60 years, since President Eisenhower created a smaller Arctic Wildlife Range just before leaving office in 1961.  The 1980 Alaska Lands Act grew the Refuge, but left a window open to oil development.  The Coastal Plain is just east of Prudhoe Bay. Both Bush administrations tried and failed to open the North Slope to oil and gas drilling and were thwarted.

Central to the debate, the 110,000 animals of the Porcupine Caribou Herd who use the Coastal Plain as a calving ground. Wolves and barren-ground grizzly bears prey on the caribou, and Gwich’in Indians use the herd as a prime food source.

The Trump Administration finally succeeded through a backdoor amendment to Republicans’ 2017 Tax Cut and Jobs Act, requiring lease sales by 2021 and 2024.  The Alaska congressional delegation, in the pocket of the petroleum industry, had fought for decades to allow drilling.  A motion by Sen. Maria Cantwell, D-Wash., to delete leasing failed on a 52-48 Senate vote.

The Trump Administration rushed the leasing process, seeking to get leases in place before No. 45 flew off to Florida.  It encountered industry wariness – oil prices are down and resistance is high and there is a lawsuit in federal court. “I think quite a few people who did not consider themselves environmentalists were stunned at the lack of bids and how little money was raised,” said Tim Bristol of Salmonstate.org  Just two small firms and the Alaska Industrial Development and Export Authority, a state agency, purchased leases, according to the Anchorage Daily News.

Biden is not stopping with the Arctic Refuge.  Initial executive orders include canceling the Keystone XL Pipeline, stopped by President Obama in 2015 but revived by Trump in 2017.  He is immediately rejoining the Paris Climate Accord, three years after Trump took the United States out of the agreement to begin curbing climate change.

On December 4, 2017, President Trump signed a proclamation eviscerating both monuments, and made provision for oil and gas leasing, mining and cattle grazing in the protectd areas.  Bear’s Ears was reduced from 1.35 million acres to 215,000 acres. The 1.88-million-acre Grand Staircase-Escalante Monument was cut in half. They would become, in the administration’s words, “right sized monuments.” During the fall election, Biden pledged to “take immediate steps to reverse the Trump Administration’s assaults on America’s natural treasurers.”

Biden is even ordering review of a Trump rule that allows bear baiting and killing of wolf pups and bear cubs in National Preserve lands surrounding national parks in Alaska. He is also ordering a review of Trump plans to throw open the 23-million-acre National Petroleum Reserve, west of Prudhoe Bay, to expanded oil and gas exploration.

Renewed protection for national monuments is a big deal.  Starting with Theodore Roosevelt, presidents of both parties have used the 1906 Antiquities Act to protect places of natural, historical, and cultural significance, often when Congress refused to act.  Teddy Roosevelt made the Grand Canyon a national monument and designated a 450,000-acre Mt. Olympus National Monument to protect the elk that now bear his name.  Both became great national parks.

Joe Biden was a great indoorsman during 36 years in the Senate, commuting home nightly by Amtrak to his home in Wilmington, Delaware.  He is, however, off to a promising start on climate and in protecting the great American outdoors.

After all, we own it.

Joel Connelly
I worked for Seattle Post-Intelligencer from 1973 until it ceased print publication in 2009, and SeattlePI.com from 2009 to 6/30/2020. During that time, I wrote about 9 presidential races, 11 Canadian and British Columbia elections‎, four doomed WPPSS nuclear plants, six Washington wilderness battles, creation of two national Monuments (Hanford Reach and San Juan Islands), a 104 million acre Alaska Lands Act, plus the Columbia Gorge National Scenic Area.
Previous article
An Inauguration Like No Other
Next article
Wanted: Who’ll Be Trump’s Alpha Lizard Replacement?