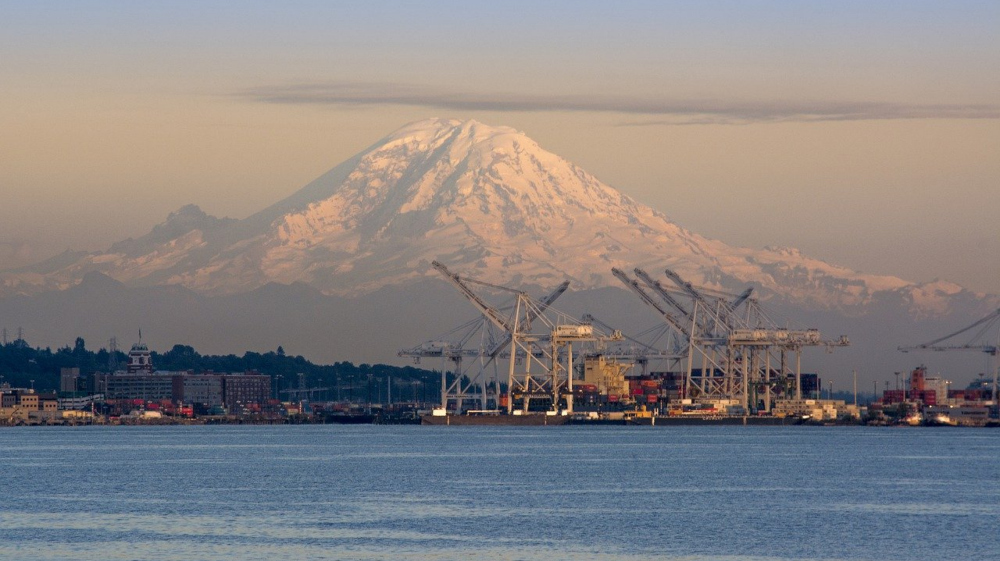 Northwest Voters Love Joe Biden. Will He Return the Affection?

With Republicans attacking the Democratic candidate as inexperienced and unready, Veep nominee Biden told wealthy donors at the Sheraton:  “Mark my words, it will not be six months before the world tests Barack Obama like they did John Kennedy.  Watch, we’re going to have an international crisis, a generated crisis, to test the mettle of this guy.”

The press pool, including myself, hit the laptops.  Obama would hit the ceiling, sending a message via Biden’s chief-of-staff: “Listen, tell Joe I love him. I love him. But he can’t be doing this.”

The Vice President was kept largely under wraps on subsequent visits here.  A 2010 fundraiser for Sen. Patty Murray was closed to coverage. (Biden was leading the U.S. delegation to the Winter Olympics in Vancouver later that day.) An Eastside fundraiser for the Democratic Congressional Campaign Committee was not even made public.

Biden is set to take office after a campaign that never really had much profile in the Northwest.  The former vice president dropped in for quiet, private fundraising events early in the race.  He was overshadowed by noisy rallies for Sens. Elizabeth Warren and Bernie Sanders, and the boomlet of support for South Bend, Ind., Mayor Pete Buttigieg.

In addition to harvesting campaign funds, the president-elect has done some harvesting of talent.  The Biden-Harris environmental agenda was constructed largely by drafters of Jay Inslee’s platform during his short-lived White House bid.  Former aides to Pramila Jayapal have worked in the transition with Vedant Patel, named Biden’s assistant press secretary.  A Coeur d’Alene, Idaho, native, Bruce Reed, is deputy chief of staff.  A centrist Democrat, once affiliated with the Democratic Leadership Council, Reed has stirred opposition and suspicion from the Democratic left.

The Pacific Northwest has occupied different roles in Republican and Democratic presidencies during the last 40 years.  Suffice it to say, we are on the A-minus list when it comes to wealthy donors. But the region is not really in electoral play any longer, and is warily viewed as a hotbed of angry demonstrators.  A rundown of roles:

Obama would fly in, do a big budget event (as much as $17,700 per person) at the home of a Costco or Zumiez co-founder. Infrequently there would be a moderately priced event at the Paramount, and Obama also raised money for such favored politicians as Sen. Murray and Gov. Inslee.

Under the administration’s Recovery Act, big federal investments went to the removal of dams from the Elwha River and the radioactive waste cleanup at Hanford.

Clinton: the President as wonky visitor

Bill Clinton liked it out here, dating back to the 1991 National Governors Assn. meeting in Seattle. He used Seattle as site of a 2009 Asia-Pacific summit, and Vancouver as site for a meetup with a sometimes-soused Russian President Boris Yeltsin.  Clinton escorted his balky charge through the UBC Museum of Anthropology and subbed for Yeltsin at a post summit briefing for the Russian president when Yeltsin was “indisposed.”

The 42nd president staged a Northwest forest summit in Portland and returned to the Rose City three years later for a daylong economic development meeting. Clinton and VP Al Gore kicked off their 1996 reelection campaign with a bus tour across Southwest Washington.  The two men helped push a stuck government pickup truck out of the mud at a flood site in Cougar. Clinton being Clinton, he used a microphone on the bus to say, “Thank you for coming!” to a black Labrador sitting on the side of the highway.

Bushes: Washington as target of opportunity

Strategists for both Bush presidents saw in Washington and Oregon an opportunity to expand the swing states in play.  Hence, we saw a lot of them, and they saw us.  “George Bush listen to me!” shouted activist Tacoma Jesuit Fr. Bill Bichsel during a 1988 speech on ethics in politics at Seattle University. Bichsel was furious at the Reagan Administration for aiding Nicaragua’s Contras.

George W. Bush was in Washington seven times during the 1999-2000 campaign cycle.  He read to schoolchildren from “The Very Hungry Caterpillar” in Yakima (in Spanish) and on Seattle’s Beacon Hill (in English). The strategy didn’t work, and W. eventually mostly just swung by for seven-figure fundraisers on the Eastside.  Protesters in top hats, from a group called “Billionaires for Bush,” paraded outside in top hats. As the political romance cooled, two leading Washington Republicans, ex-Gov. Dan Evans and ex-Sen. Slade Gorton, were passed over for Cabinet and federal judiciary appointments.

In May of 2016, Donald Trump did a brief flirtation with the Northwest.  We haven’t seen him since.  Vice President Mike Pence did come to Spokane in 2018 to raise money for U.S. Rep. Cathy McMorris Rodgers, but that’s the extent of his presence here.

Invective has, however, flowed between the two Washingtons.  Trump called Inslee “a snake” after the governor criticized the feds’ coronavirus response.  Inslee once joked about building a wall around Washington to keep Trump out. He has referred to Trump as “a blip in history.” After Trump decried “ugly anarchists” in the Capitol Hill occupation zone, and threatened to “take back the city,” Inslee tweeted:  “A man who is totally incapable of governing should stay out of Washington state’s business.” Eminent Republicans in the state, including Evans and Gorton, declared a year ahead of time that they would not vote to reelect Trump.

Biden An Era of Good Feelings?

The new President is an old-fashioned centrist Democrat, beloved by such unions as the Firefighters, and has refused to embrace such left-Democrat causes as Medicare for All. He spent almost no money in Washington’s March, 2020 presidential primary, but defeated heavy favorite Sen. Bernie Sanders.

Our state’s Democrats display the party’s strains.  Seattle Rep. Pramila Jayapal is chair of the Congressional Progressive Caucus and was first to introduce Medicare for All in the House.  Eastside Rep. Suzan DelBene is incoming chair of the centrist New Democrat Coalition, succeeding Rep. Derek Kilmer, based on the jobs-short Olympia Peninsula.  The party’s center/left and activist left fought it out for an open U.S. House seat last fall, with ex-Tacoma Mayor Marilyn Strickland (the moderate Democrat) besting State Rep. Beth Doglio for the lower Puget Sound seat.

Starting with Clinton, the West Coast (the “Left Coast” as Wall Street Journal editorial writers call us) has replaced the South and the Midwest’s Blue Wall as a bulwark of automatic Democratic political support. Such a region can easily turn into a place whose voters are taken for granted.  The reliably deep-blue West Coast contributes massively to the country’s economy, is at the forefront in climate activism, provides a deep talent pool, and demonstrates a country’s growing diversity and inclusiveness.

Joe Biden will notice us. But how seriously he views us is yet to be determined.

Joel Connelly
I worked for Seattle Post-Intelligencer from 1973 until it ceased print publication in 2009, and SeattlePI.com from 2009 to 6/30/2020. During that time, I wrote about 9 presidential races, 11 Canadian and British Columbia elections‎, four doomed WPPSS nuclear plants, six Washington wilderness battles, creation of two national Monuments (Hanford Reach and San Juan Islands), a 104 million acre Alaska Lands Act, plus the Columbia Gorge National Scenic Area.
Previous article
Good Riddance to 2020…
Next article
The Mutating COVID: What it Means for You