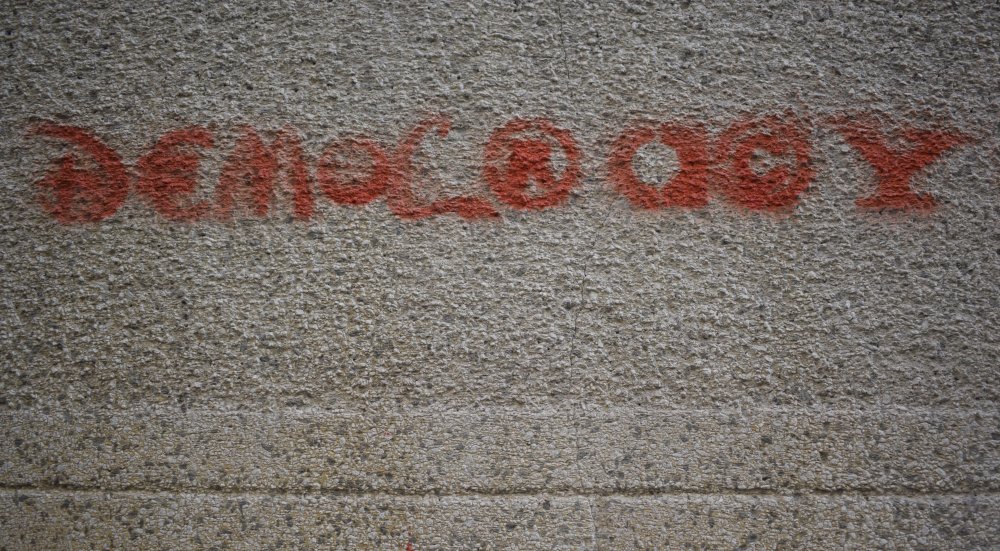 This Year in Democracy Reform: Progress is Being Made

If Bill Gates, Barack Obama, NPR, Amazon, and big and small publications can name their best books of 2020, so can I. Everyone in the Biden administration and Congress — and you, too — should read these two: Fareed Zakaria’s “Ten Lessons for a Post-Pandemic World” and Robert Putnam’s “The Upswing: How America Came Together a Century Ago and How We Can Do It Again.”

Both are bad-news/good-news books about America’s troubled and deeply divided society, with ideas on how to repair it. Much progress was made in reforming our democratic institutions in the past year, with lots more to do and actively sought by reform groups discussed below.

Putnam looks backward: at America’s “upswing” from the strife-ridden Gilded Age of the 1880s and ’90s to the reform accomplishments of the Progressive Era and New Deal and into the mid-1960s, after which progress suddenly slowed and we became what we are now: fractured, unequal, and deeply polarized. His suggestions, similar to but less detailed than Zakaria’s, can be boiled down to one: concerted citizen action for reform.

Both books end up (very) cautiously optimistic. “We are not doomed” and “nothing is ‘written’” or inevitable, Zakaria says. Putnam sees hope in citizen action on gun safety, climate change, racial justice and health care reform.

Financier Peter Ackerman has spent millions of dollars suing to get the bipartisan (but not nonpartisan) Commission on Presidential Debates to alter rules that bar third-party or independent candidates from participating in televised debates. He’s just appealed his case to the U.S. Supreme Court.

These wins come on top of similar gains in 2018, establishing the movement’s potential to be as significant in repairing savagely polarized and pay-to-play U.S. politics as the Progressives cited by Putnam. The reformers constitute just the sort of citizen action he called for — and work the same way as women’s suffrage, union organizing, sanitation improvement, and political cleanup did: starting at the local and state level and ultimately prevailing in Washington.

Not every 2020 reform effort succeeded, however. A referendum to install ranked-choice voting in Massachusetts was defeated. Missouri voters actually went backward, repealing a broad reform package voters had passed in 2018.

Reformers are aware they cannot claim sole credit for 2020’s record voter turnout or the record numbers of early and mail-in votes, since Donald Trump and the COVID pandemic were contributing factors. But reform groups did promote mail voting, defend it against Trump assertions it is rife with fraud, and advise voters not to expect full results on Election Day.

One of the largest and most effective of all the reform groups is Represent.us, which raised $12 million from 16,000 donors (including $2 million during a star-studded telethon) to aid state and local groups and prepare an often comic set of videos urging voters in swing states to register and vote early or by mail. In one video, “Naked,” stars such as Chris Rock, Sarah Silverman, Mark Ruffalo, and Amy Schumer appear (modestly) unclothed to tell voters how to make sure mail-in ballots were completed accurately so election authorities could not disqualify them.

Over several years, the group has mounted dozens of other videos — usually urgent and serious — to expose moneyed special interest “corruption” of policymaking at the expense of public preferences., These videos were a way to recruit volunteers and donors. It claims 45 million people have watched them.

Recruiting Hollywood advocates, including Jennifer Lawrence, Michael Douglas, “Borat,” Ed Helms, and others makes Represent.us unique among reform groups — thanks, according to Executive Director Josh Silver, to film and theater producer-directors Brian and Tara Swibel and Adam McKay. Twibel, Helms, Lawrence and McKay serve on the group’s board.

Along with the nation’s lead vote-by-mail advocacy group, the National Vote-at-Home Institute, Silver’s group enlisted a bipartisan group of national heavyweights, led by Republican former Pennsylvania Gov. (and homeland security secretary) Tom Ridge and Democratic former Michigan Gov. Jennifer Granholm to form Project VoteSafe, which promoted voting by mail as a secure option. VoteSafe chapters in the swing states of Michigan, Pennsylvania and Wisconsin recruited former Republican officials to give cover to GOP election officials who withstood attacks from other Republicans for declaring Trump had lost their states.

When Trump claimed that fraudulent mail-in ballots robbed him of an election victory, Ridge said the president “disrespected every single  American who figured out a way to safely vote amid a pandemic that has taken 235,000 lives. Not to mention those who are dutifully counting that vote. Absolutely shameful. Yet so predictable.”

Represent.us also put together a group of 70 retired generals, admirals and former service secretaries, “Count Every Hero,”  which urged that every military vote be counted — and also informed civilians that U.S. military members have been voting by mail since the  Civil War.

Amber McReynolds, CEO of the Vote-at-Home Institute, says that while final tallies aren’t in yet, she expects that 80 million votes were cast by mail this year — half of all those voting. That’s up from 31 million in 2016.

Because of COVID, numerous states loosened their voting laws. Four — California, Nevada, New Jersey, and Vermont — and the District of Columbia permanently adopted the system McReynolds developed in Colorado of mailing ballots to all registered voters and requiring signatures upon return. That’s also the system in Washington, Hawaii, and Oregon — all “blue,” but also in bright red Utah.

Washington state has adopted almost every measure reformers advocate except one. Up to now, the legislature has failed to pass even a local option bill allowing local jurisdictions to experiment with ranked choice voting. But FairVoteWA, the group pushing RCV, has hopes that the idea has enough support among Democratic leaders now that a local options bill might be passed in 2021. Other bills will be introduced to mandate RCV’s use in presidential primaries, and Congressional and state offices.

Trump began railing against mail-in voting after states — both red and blue — made it easier to obtain an absentee ballot, either for 2020 or permanently. All those states experienced spikes in turnout and reduced lines at polling places, suggesting that convenience and the absence of any party advantage will incentivize states to keep or expand upon system changes in the future.

However, voters reinstalled Republican majorities in every state legislature they have dominated since 2010 — presumably motivated by fears (stoked by Trump and his allies) that left-wing “socialist” Democrats would defund police, eliminate private health insurance, provide free college regardless of income and make it easier for immigrants to enter the U.S. illegally.

Silver fears that GOP legislatures in states like North Carolina, Arizona, Georgia, Missouri, Wisconsin, Ohio, Michigan, and Pennsylvania will gerrymander state and congressional districts in 2021 to give themselves unfair electoral advantages for another decade. He also fears such states will enact “reforms” designed to suppress voting by minority groups and Democrats. Indeed, such moves are already under way in Georgia, Pennsylvania, Wisconsin, and Michigan.

He also fears Republicans will initiate lawsuits asking the conservative Supreme Court majority to decree that only state legislatures and Congress can change federal election laws, neutering the power of citizen initiatives, governors ,and state courts to correct the course. Absent such a ruling, however, McReynolds points out that Pennsylvania, Michigan, and Wisconsin have Democratic governors who would oppose such moves.

“While our analysis could be misconstrued as partisan,” he said, “it is not. One major political party has decided that representative democracy is not in its interest, and we must respond accordingly. We remain staunchly nonpartisan.”

He may be nonpartisan, but he’s definitely anti-Trump and Trumpism, which he calls a “malignancy” and “metastasizing authoritarianism.” In August, when Trump refused to commit to a peaceful transfer of power if he lost the election, Represent.us took out a full page ad in the New York Times calling on Trump to resign if he could not follow that historic norm.

Reform groups did get help this year from some Republicans — and others withstood withering attacks, lawsuits, and even death threats — to defend their voting results against assaults from Trump supporters. Silver said, “We have become dependent on the backbone of just a few public officials to keep democracy’s ship afloat — a prospect as un-American as it is unsustainable.”

Represent.us has set out an aggressive agenda for 2021 and 2222 — to strengthen the democracy movement financially and pass new election and ethics reforms at the local, state and national level. Its federal agenda includes an Election Security Act to prevent foreign interference in U.S. elections, a Presidential Checks and Balances Act to prevent future Trump-like conflicts of interest, attacks on the independence of federal agencies, refusal to cooperate with congressional oversight, and other abuses of power.

“We face what is perhaps the last window in which our broken system of elections, ethics and executive powers can be fixed such that the next authoritarian [president] will be stymied by laws rather than inconvenienced by norms,” he wrote in his agenda document. “We have a short time before the next, more skillful authoritarian takes the White House. A short window to address the most urgent crises facing our planet by fixing the underlying, root causes of our political crisis.”

This article first appeared in RealClearPolitics.com.

Mort Kondracke
Morton Kondracke is a retired Washington, DC, journalist (Chicago Sun-Times, The New Republic, McLaughlin Group, FoxNews Special Report, Roll Call, Newsweek, Wall Street Journal) now living on Bainbridge Island. He continues to write regularly for (besides PostAlley) RealClearpolitics.com, mainly to advance the cause of political reform.
Previous article
Three Hurdles to Herd Immunity
Next article
Now Is the Time For a Nonpartisan Commission to Come to the Aid of Our Elections