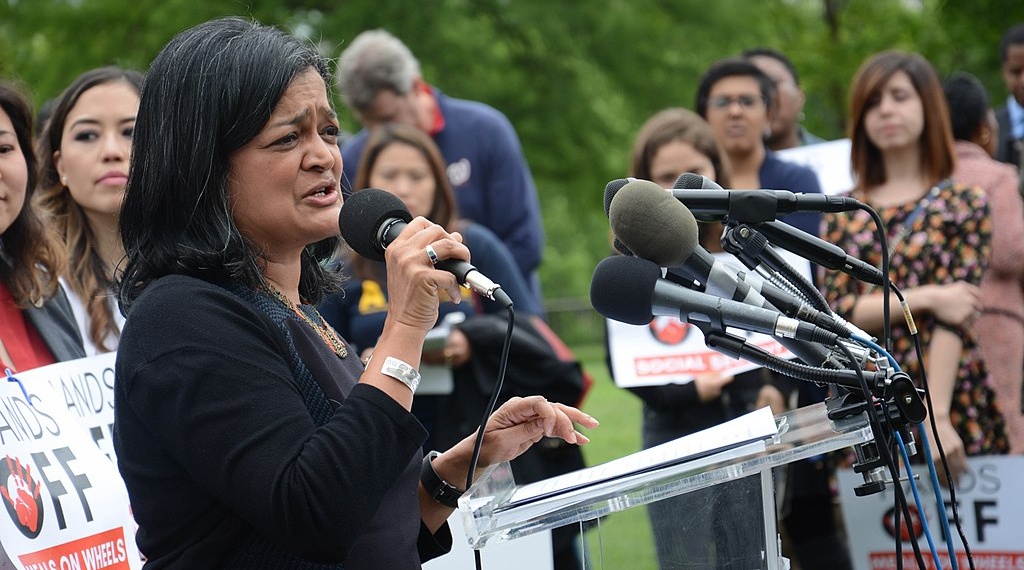 U.S. Rep. Pramila Jayapal, D-7 Seattle, preaches to the choir of the political left when she holds town meetings at home in Seattle.  So many heads nod in dizzying unison that a first-time attendee is strongly advised to swallow Dramamine.

Jayapal occupies one of America’s safest Congressional seats, having just won her third term with 82.99 percent of the vote and a 308,000-vote victory cushion.  She is a force in both Washingtons, having emerged as a leader/negotiator for the Congressional Progressive Caucus, which pushed early for impeachment of President Trump.

Of late, however, the path to political power has grown rockier and steeper.

Jayapal gambled and put big bucks behind the 10th Congressional District campaign of State Rep. Beth Doglio — $640,000 from the Congressional Progressive Caucus PAC and $190,000 from Jayapal’s own Medicare-for-All PAC.  The labor left, SEIU (service employees)and UFCW (culinary workers), also spent heavily for Doglio, the more liberal and green of the two Democratic candidates. In a top-two Democrat vs. Democrat general election, however, the more moderate Democrat, ex-Tacoma Mayor Marilyn Strickland, won in a landslide.  Doglio took only 35.56 percent of the South Sound district’s vote, despite a $400,000 outlay of “independent” attack ads against Strickland.

The Democratic left is also being blamed for unexpected poor showing of national House Democrats.  The party lost seats it captured two years ago in conservative regions – Utah, South Carolina, Oklahoma, eastern New Mexico – plus two heavily Latino districts in South Florida. “’Defund the police’ almost cost me my race because of an attack ad:  Don’t say ‘socialism’ ever again. We must get back to the basics,” Rep. Abigail Spanberger, D-Virginia, told a raucous Democratic caucus call two days after the election.

In Michigan, Rep. Elissa Slotkin barely survived in a district carried by Trump, coming away convinced the Democratic left has an attitude problem.  “We sometimes make people feel like they’re not conscious enough,” she said.  “They’re not ‘woke’ enough. They aren’t smart enough or educated enough to just understand what’s good for them.  It’s talking down to people. It’s alienating them.”

The media have largely created “The Squad,” four left Democrats elected to Congress in 2018 from very liberal districts.  Rep. Alexandria Ocasio-Cortez has become the darling of MSNBC, the devil figure of Fox News.  Rep. Rashida Tlaib, D-Michigan, was promoted by Jayapal in 2018.  The nation’s first introduction to Rep.-elect Tlaib was a raucous celebration at which she famously said of President Trump, “We’re going to impeach the motherfucker.” A third member of the squad, Rep. Ilhan Omar, D-Minn., has scoffed at blame coming from party moderates, saying:  “When people single out a slogan like ‘Defund’ as a catch-all excuse for underperforming, they are underestimating a movement of Black activists who stared down police repression as they demanded change in the streets.”

Feuding Democrats is an old, old story. The party has been likened to a bumblebee, with parts that fit together awkwardly, but somehow able to fly.

Each faction is claiming credit for Joe Biden’s victory, and each side is making a case.  Biden piled up big margins in majority-minority inner city districts of Detroit, Philadelphia, and Milwaukee.  Yet the Democratic presidential ticket won in suburban Oakland County outside Detroit, in GOP-leaning Bucks County near Philly, and held its own in the three Republican-leaning “WOW” counties west of Milwaukee.

Which brings us back to Jayapal. She is a passionate, let-it-all-hang-out progressive. Jayapal tweeted on Monday: “We need to keep people in their homes by fully renewing eviction moratoriums and canceling rent and mortgage payments during the pandemic.”  She continues to champion Medicare-for-all, although its champions were defeated in the Democratic presidential nomination race.  She has written articles on having an abortion, and a gender non-conforming offspring.

Jayapal is also an important and skilled political player, and she has been such since founding a post-9/11 Seattle organization which blossomed into the effective immigrant-rights lobby OneAmerica.  Before entering Congress, she participated in drafting an immigration reform plan that the U.S. Senate passed by bipartisan vote in 2013.  (It died in the GOP-run House.) Two years ago, she negotiated good committee assignments for newly elected House progressives, including herself, and reciprocated with a perfectly timed endorsement of Nancy Pelosi as Speaker.

Two facts stand out about these contentious Democrats.  Apart from Jayapal, the Democratic left has a tin ear.  It has not been able to sell the public on its programs.  It is making all sorts of “demands” on Joe Biden, particularly about those it wants ostracized from the new administration — even though the left’s candidates, Bernie Sanders and Elizabeth Warren, lost the nomination race.

Legislating is not accomplished on Cable TV.  Instead, stereotypes are established on Cable TV.  And those who pontificate for sweeping measures (e.g. the Green New Deal) need to live with a basic fact.  In Joe Biden, Americans have elected an incrementalist as president.

The party left must also get along with the center.  “The Squad” and other Congressional Progressive leaders represent safe, one-party districts.  The Democrats’ bare-bones majority in the next Congress is secured by folks like Slotkin and Spangberger, narrowly reelected from swing districts. That includes Rep. Kim Schrier, D-8 Washington, who had a thin win in the trans-Cascades district that Republicans held for 36 years until 2018.

After gains this month, Republicans now have a clear path back to House control in 2022.  Does anybody in the Democratic House Caucus want GOP Rep. Jim Jordan pounding a gavel in the House Judiciary Committee, or Trump guttersnipe Devin Nunes back at the helm of the House Intelligence Committee?  Or Rep. Adam Smith, D-9 Washington, giving up the House Armed Services Committee chair?

The Democrats “bumblebee” needs retooling before being allowed back in the air. To keep support, it needs to hold onto the suburbs. That said, Pramila Jayapal will play a consequential role.  That role was best defined, years ago, when Senate Majority Leader Lyndon Johnson pointed to his liberal colleague Hubert Humphrey, and called him “my link to the bomb throwers.”

Joel Connelly
I worked for Seattle Post-Intelligencer from 1973 until it ceased print publication in 2009, and SeattlePI.com from 2009 to 6/30/2020. During that time, I wrote about 9 presidential races, 11 Canadian and British Columbia elections‎, four doomed WPPSS nuclear plants, six Washington wilderness battles, creation of two national Monuments (Hanford Reach and San Juan Islands), a 104 million acre Alaska Lands Act, plus the Columbia Gorge National Scenic Area.
Previous article
The Further Adventures of News Junkie: So I Skipped a few Steps…
Next article
The Robin Hood of Piedmont