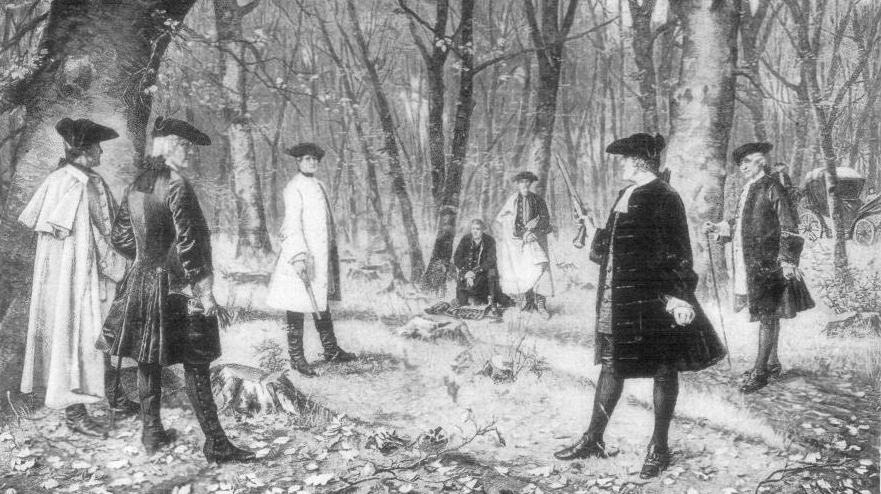 The Republican Party already blew its Hamilton moment twice, this year and in 2016, when it put party and power ahead of nation and principle and rallied around Donald Trump. Now it’s even failing its Jefferson test.

In case you’ve forgotten your American history class or Hamilton lyrics: In the bitter, messy presidential election of 1800, Thomas Jefferson and Aaron Burr, both members of the rising Democratic-Republican party, tied in electoral votes, throwing the choice to the House of Representatives. Jefferson was Alexander Hamilton’s political and ideological nemesis and the bête noire of Hamilton’s conservative fellow Federalists. His flights of revolutionary rhetoric inspired the same sort of alarm that Bernie Sanders’ democratic socialism does today. Many Federalists leaned toward Burr, who would flatter anyone and promise anything.

But Hamilton broke ranks and used his influence to nudge the New York delegation, and the election, over to Jefferson—an intervention that would help doom the Federalist Party and lead to Hamilton’s death in a duel with Burr four years later. Hamilton’s reasoning, in an 1800 letter: “On every virtuous and prudent calculation Jefferson is to be preferred. He is by far not so dangerous a man and he has pretensions to character.” Burr, by contrast, “has held very vindictive language respecting his opponents…. If he can, he will certainly disturb our institutions to secure to himself permanent power and with it wealth.”

Sound familiar? In 2016 and again this year, Republicans faced the same sort of challenge; Donald Trump is our trash-culture answer to Aaron Burr, with all of Burr’s vindictiveness, mendacity, extravagance and amorality, minus his competence, learning and military courage. Many prominent Rs, including nearly all those who shared the 2016 primary debate stage, deplored Trump at first. Lindsey Graham, now Trump’s most fulsome cheerleader, famously called him “crazy,” a “jackass” and “kook” who was “unfit for office.” As soon as Trump had the nomination in hand, however, they shut up and fell in line. Up in Founders’ Heaven, Hamilton wept.

Now the Burr precedent is playing out again, in a scarier way. After a term as Jefferson’s vice president (a post then reserved for presidential runner-ups), Burr got bumped from the ticket. He went rogue, entering into a murky conspiracy with funds from the British and Spanish governments, to seize Mexico, or the United States’ western territories, or Washington, DC, itself. (The plans were shifting as well as shifty).

Jefferson did not shirk from having his former veep and fellow Democratic-Republican arrested. Burr was tried but acquitted. Federalist rivals covered for him to embarrass Jefferson; one, Chief Justice John Marshall, dismissed a treason charge on the curious grounds that treason could only occur during a state of war.

Burr’s shenanigans were less extraordinary then than they would seem today; rumbles about severing off one part or another of the new republic rose and faded repeatedly in its early years, and the chief general of the U.S. Army, Jamie Wilkinson, was a co-conspirator on the Spanish payroll, who pinned the blame on Burr to save his own skin. Given the difference in eras, Trump’s election-denying, democracy-disparaging, institution-undermining shenanigans, on top of four years of self-dealing and Russia-coddling, are as outrageous today as Burr’s were then. And they threaten to do more lasting damage.

But leading Republicans, with a few honorable exceptions (Mitt Romney, we hardly knew ya), again shut up and fell in line as Trump impugned the election process and denied the results before and after the vote, as he lied repeatedly about phantom cheating, tweeted dog-whistle threats of violence, and blocked even preliminary, non-concessionary transition procedures. Thirty former congressional Republicans and a few who aren’t seeking reelection, who don’t have to fear the Wrath of Donald and his followers, called on Trump to end the dead-ender farce and concede. Many whose seats and (in the Senate) majority will be on the line squirmed but, trying to turn grimaces into grins, seconded delaying the transition while the “process” (scattershot nuisance lawsuits) plays itself out. One urged going along to “humor” Trump while he gets over the pain of losing: “What’s the harm?”

The harms, as widely noted, are multiple: Jamming the complex transition process and handicapping the new administration. Exposing the country to adversaries while it’s frozen in molt. Discrediting even further the liberal democracy America once exemplified.

Others in the press and opposition likewise presume that Trump’s resistance is sincere if mistaken—that, as one Intercept reporter told the BBC, “He doesn’t believe he’s lost.” That’s comforting, in a way: Crediting Trump’s resistance to conviction or hurt feelings implies that once mollified or persuaded, he’ll come around.

But that underestimates his low cunning and knack for opportunism—qualities too many have underestimated too many times before. Even his own sister thought he was too much of a “clown” to ever become president. He’ll never get nominated, Republicans said before he swept them away at the debates. He’ll never get elected, Democrats said. He doesn’t want the job—he just wants to build his brand. He’s the dog chasing the bus—good luck if he ever catches it. The job will tame him or overwhelm him. “He’ll just be really ineffective,” one Republican friend assured me.

But “ineffective” at dealing with coronaviruses and other real-world challenges is very different from “consequential” as an agent of chaos and conflict. Surely even Trump doesn’t imagine he can use tinpot-dictator tricks like packing his defense department with political toadies to overturn an election, the wise ones say now. He can strut and bray, but Joe Biden will be inaugurated January 20. Already a few more congressional Republicans are calling on him to take the first transition step, sharing the daily presidential briefings.

And yet…. Aaron Burr’s enablers likewise underestimated his capacity for mischief. Trump has surprised the wise ones so many times before.

Eric Scigliano
Eric Scigliano has written on varied environmental, cultural and political subjects for many local and national publications. His books include Puget Sound: Sea Between the Mountains, Love War and Circuses (Seeing the Elephant), Michelangelo’s Mountain, Flotsametrics and the Floating World (with Curtis Ebbesmeyer), The Wild Edge, and, newly published, The Big Thaw: Ancient Carbon and a Race to Save the Planet.
Previous article
A Dusty Future for the Seattle Times
Next article
State Election: Status Quo at the Top, but No Big Blue Wave