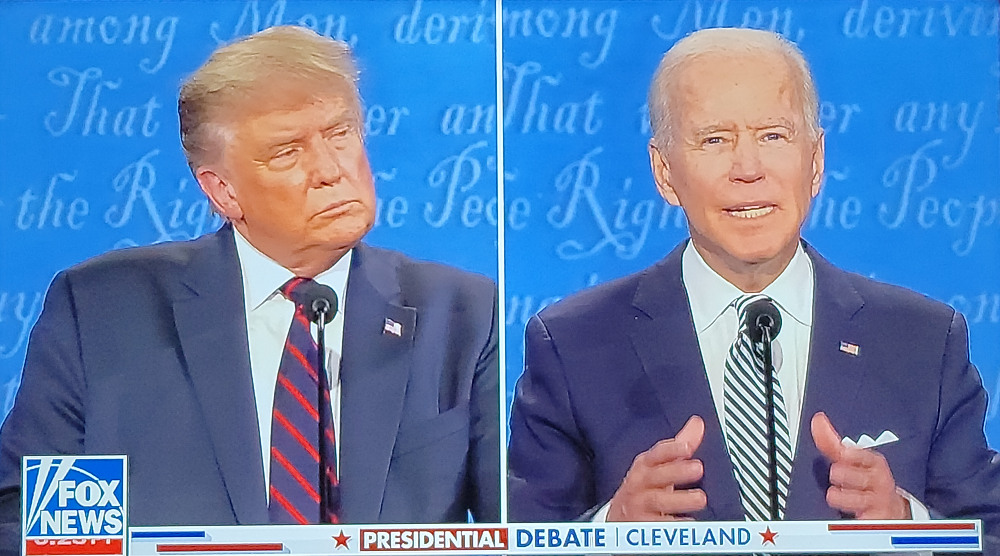 That’s the punditry talking after the worst example of a national presidential debate – a supposed high level discussion of our differences, with at least some dignity and respect for the country’s most important job – I have ever witnessed.

“As someone who has watched for 40 years,that was the worst presidential debate I have ever seen.”
— ABC’s George Stephanopolous

I usually take notes, but just wanted to listen and watch tonight, and in the end just sat at the edge of the couch, stunned.

As a journalist I viewed, sometimes covered from the studio, presidential debates, but in those four decades never encountered such a humiliation of our democracy. I even felt a bit of sorrow for moderator Chris Wallace who was simply overrun by Donald Trump’s disregard for rules, his interruptions, his string of made-up “facts” – behavior more in keeping with a bar fight than a Presidential Debate.

Let all the reportage and punditry dissect Trump’s ramblings and disinformation about the virus, climate change, racism, etc. – what should disqualify this President from even another day in office (and certainly after January 20) was his savage attack on our electoral system, on mail balloting (“fraud,” “rigged”) – a bedrock of democratic life.

Here was a president, in a national presidential debate, without evidence, calling a mailing system many states including our own use in every election fraudulent, and again refusing to say he’d accept the certified final result.

But enough. It was no surprise, just the Trump we’ve known but on a bigger stage. It brought to mind that overused quote from Michelle Obama, but profoundly on target tonight — “the Presidency doesn’t change who you are; it reveals who you are.”

As it did this embarrassing night……..

Mike James
Mike James was a long-time anchor newscaster at KING TV.
Previous article
Debate Interrupted: Breaking all the Rules
Next article
Everything You Need to Know About Mayor Durkan’s Proposed City Budget