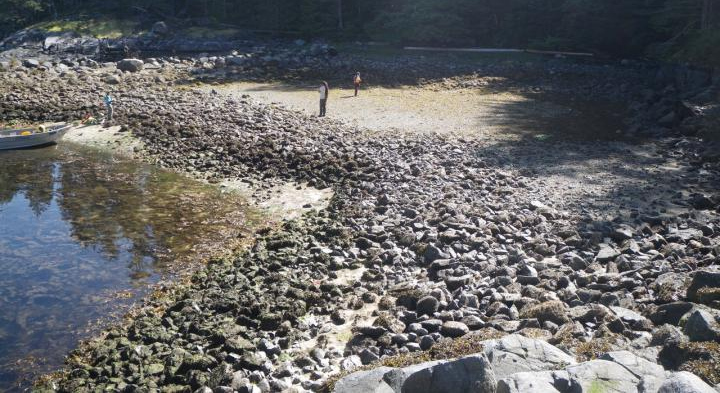 An Ancient Clam Garden Resurfaces on a Puget Sound Beach

For the last month, I have been stumbling and puffing my way along Puget Sound beaches looking for clam gardens.  It has been my good fortune to be accompanied in this quest by Dr. Nile Thomson and his wife, Dr. Carolyn Maar, both professional and interested anthropologists who keep me on the straight and narrow.

Clam gardens are well documented further north in British Columbia.  Choosing a good clamming beach, typically in boulder fields, native people removed the rocks to give clams more room to proliferate in the sand.  Stacked on the gardens’ sides, the rocks look like field walls New England farmers made from stones to ease plowing and mark boundaries.  The nearest clam garden I know of is close to La Conner where the Swinomish Tribe is restoring it, the first group in the United States to do so.

In my earlier searches I found what looked like open spaces in cobble fields flanked by rock piles, and what appeared to be a trail using the same method that provided a sandy path through barnacle-armored boulders topped by slippery seaweed.  But the beach has changed since workers built the seawalls to support railroad beds in the 1890s.  Once these beaches were constantly replenished by sand and rocks eroded from bluffs, but the seawall halted the process and flanking beaches now have less sand.  Was what I saw really clam gardens?  Interesting looking structures seen in Google Earth images proved on inspection to be interesting looking eel grass beds.

On June 6 we made another foray on a low-low tide. After a long hike, we found a rectangular patch of sand about 30 by 40 feet in a great stretch of weedy boulders.  No ambiguity here.  On one side were piles of boulders, many quite large, that had been muscled out.  The whole was so spectacular I burst out laughing.

But I am not laughing now.  Overnight the rare, ephemeral deposits left by ancient people underground are replaced by visible sturdy stone structures.  It is as though we woke up to find Anasazi pueblo ruins in our back yard.  The lithic has been put back in Neolithic.

So what now?  I am vague about locations because it is too easy to imagine crowds trampling sites which, although sturdy, are fragile.  Protocols must be established, protections developed.  Fortunately, the sites are covered by many feet of water most of the year, but at low water they will need to be accurately interpreted and guarded.

They belong to Native Americans.  These represent some of the “usual and accustomed places” where they gather food, and their legal right to do so has been enshrined in treaties and affirmed in decisions by the Supreme Court.  In this case, these sites belong to the Duwamish Tribe, the first signatories of the Treaty of Point Elliott. The Duwamish nurtured the early white settlement of Seattle, but because of white greed and civic indifference the tribe remains unrecognized by the federal government.

The blame for this shameful situation lies squarely with the City of Seattle, which over the past 160 years has made sure the Duwamish remain landless (it was just too valuable to leave in native hands) and, therefore, unrecognized as a tribal nation.  King County and Washington State, too, have been all-too-willing participants in the ongoing injustice.  The rape must cease, and the better angels of our nature need to prevail.

Various friends of the Duwamish will stand up to defend the tribe from the ambitious. But in this brief season of possibility, when justice may right old wrongs, more must call upon the mayor and city, county and state government to protect this new and remarkable resource and all it can mean for generations to come.  Meanwhile, keep clam (gardens).