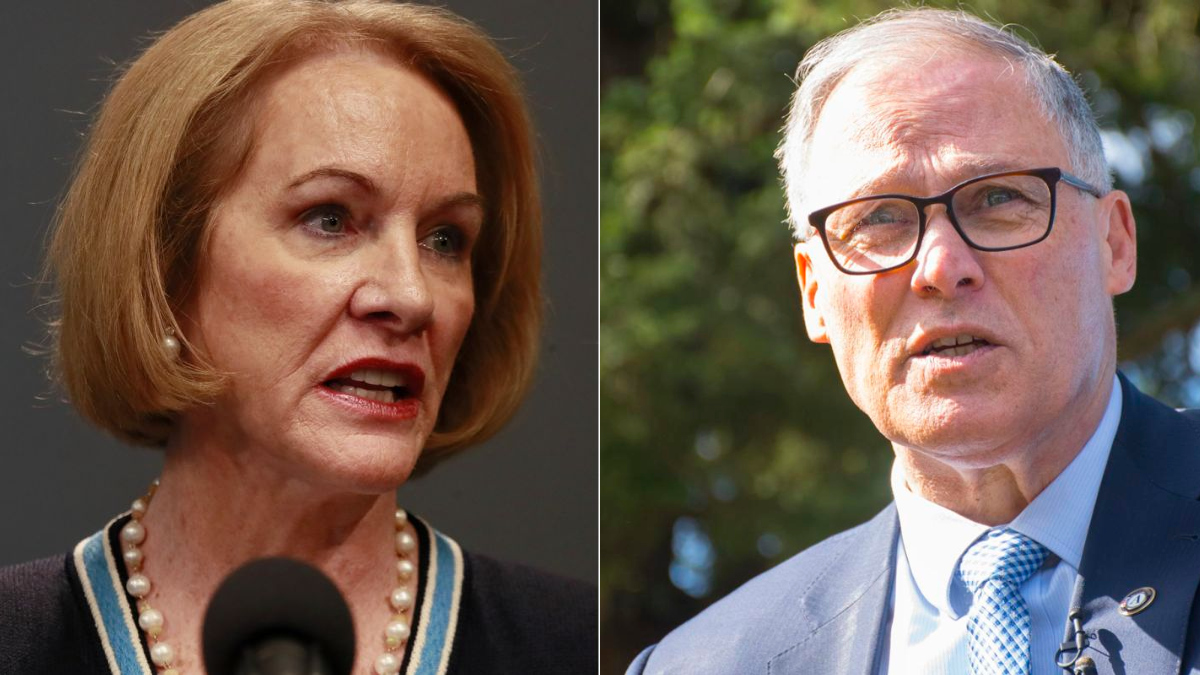 The Long Game: Durkan and Inslee Take the Gamble

Seattle Mayor Jenny Durkan and Washington Gov. Jay Inslee are both playing risky, long games in local politics. They may not work out, and there’s a serious hitch in this strategy for both leaders.

To start with Mayor Durkan. Her risky game is to wait out the Seattle City Council, playing out the hangman’s rope, and hoping that the good sense of the Seattle voter will tighten the noose. Metaphoric overload aside, that means letting the radicalized council defund police officers, impose payroll taxes, and favor the homeless.

The ploy is to box the council into these temporarily gratifying but ultimately unpopular positions. Oppose these positions more forcefully than the earlier Durkan did, trying to find an elusive progressive center. Then the mayor can rub her hands and wait for the trap to be sprung.

Some pushback might come in court battles. Some might take the form of prudent restraint from labor unions, fearful of losing their investment in the current councilmembers. Some might take the form of stirrings of a revolt by the voters, jeopardizing the political ambitions of the councilmembers. A lot will stem from the impact of the Greater Recession, which is likely to supplant the current mood of street-protest politics.

Already there are stirrings of uneasiness with the radical Seattle agenda. Durkan is now in clear opposition, as is the very popular Police Chief Carmen Best. One hears that Amazon has now decided that its future expansion will not be in Seattle. Amazon and other companies are working on end runs to the high-earners’ payroll tax, moving employees technically out of the city. Judge James Robart, who oversees the Seattle compliance with the DOJ consent decree, is resisting the effects of defunding police.

There’s one big hitch, however. Will Durkan stick around and run for (or be elected to) a second term in 2021? Many are betting that she wants out. If so, does the long game last enough to pay off? Or just long enough to elect a more radical mayor in 2021?

As for Gov. Inslee, his long game has been to stall on calling a special session of the Legislature, which might get out ahead of the coming Greater Recession by raising taxes or making budget cuts early. Instead, Insle wants to wait until a new legislative session in January, presumably with wider Democratic majorities.

The Inslee procrastination can be viewed cynically. He’s running for reelection this year, and so he doesn’t want the liability of raising taxes or the ire of laid-off state employees. (That dereliction of duty almost prompted a serious challenge to Inslee in the primary.) Labor unions, who hold much clout with Inslee, strongly opposed the special session, fearing it would nix promised state worker raises.

Or it can be viewed tactically, as a shrewd move to elect more social-justice legislators and to buy time to assemble a tax-boosting majority. The likely new taxes are capital gains, a statewide payroll tax modeled on the new Seattle tax (whose weaselly language suggests would void the Seattle tax), and (long-shot) a flat-rate income tax. The big hope has been that delay might produce a federal bailout for states and cities.

Lots of problems with this gambit, in my view. Courts might intervene and say the governor must balance the budget, not wait. As the recession worsens, the appetite for a tax increase gets duller, and the politics of retrenchment sets in. The primary election did not suggest a Democratic tide, much less a radical Democratic surge.

And Inslee may not stick around for governor very long, once the Biden cabinet slots start beckoning.

Once again, playing the long game presupposes you are around to collect the chips at the end. The long game is a tough one to play when the world is being turned upside down. Sending the chips to D.C. is not exactly hitting the political jackpot.

David Brewster
David Brewster, a founding member of Post Alley, has a long career in publishing, having founded Seattle Weekly, Sasquatch Books, and Crosscut.com. His civic ventures have been Town Hall Seattle and FolioSeattle.
Previous article
Chapters 31, 32 & 33: Sketch, Lucy Holcomb, and Ronson
Next article
The Brat is Back!